The operative word in this week’s headline is art.
Art on a grand scale. As in a massive movie-themed mural painted on Pier 9 of the Michigan Central Railroad trestle, which hosts the St. Thomas Elevated Park atop the impressive structure.
The expansive visual treatment, to be undertaken by mural artist Daniel Bombardier, also known as Denial, is the brainchild of the St. Thomas Economic Development Corporation.
Because the mural would be an alteration to the bridge designated under the Ontario Heritage Act, council’s consent is required and the matter will be on the agenda for Monday’s May 3 meeting.
At an April 14 meeting of the Municipal Heritage Committee, support was given to the project, “subject to any paint or colour scheme being complementary to the historic character of the designated property.”
Serge Lavoie, president of the elevated park promotes it as “a worthy addition to Canada’s first and only elevated park.”

The mural is described as looking “like a classic film scene set in St. Thomas, referencing both the heritage of the site and the history of train travel and culture in the community. 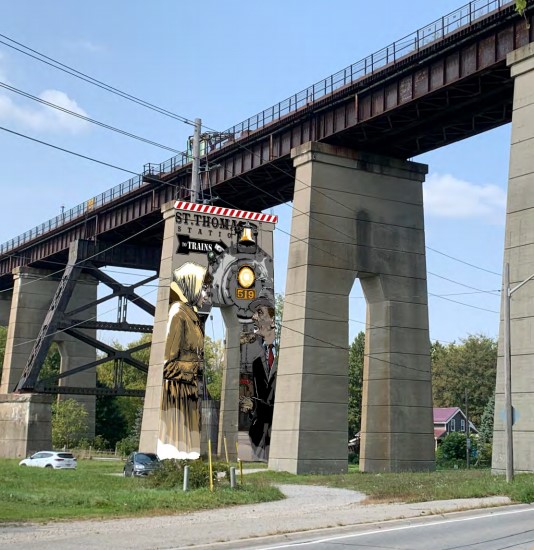 “The intent is to cover the entire surface of the pier, making this a mural of staggering size and scope for St. Thomas.
“Residents and visitors can expect a landmark photo spot that encapsulates the romance and grandeur of travel by rail.”
As it will be a permanent fixture on the massive pier, the question arises as to the impact of weathering over the years.

“We look forward to working with you and the artist this year to deliver a truly monumental addition to the city’s heritage art and culture.”

This could be an intriguing positive factor, notes the Municipal Heritage Committee (MHC).
“This is one case where the second half of the lifespan of the mural may be more compelling than the first; indeed, as this particular piece fades, we expect the overall look of the space to be gradually enhanced.”
The MHC analysis continues, “Currently, there are no plans to paint the other pillars. If the first mural is well received, we could contemplate additional pieces (of which the photo reproduced above is an artist rendering).
“Our view is that, with the right design, the mural does not diminish the heritage value of the bridge, but actually enhances the site by drawing a new generation to look closely at the artwork and the structure.”
The MHC concludes, “our assessment is that there is overwhelming support for the proposal with the strong recommendation that the artwork complement the vintage of the structure and the natural setting.
“This is certainly our intention and we expect the artwork to become a landmark for many years to come.”
In correspondence from Lavoie to Megan Pickersgill, tourism manager with the St. Thomas Economic Development Corporation he advises, “We look forward to working with you and the artist this year to deliver a truly monumental addition to the city’s heritage art and culture.”
Certainly an exhortation to go big or go home.

Talks begin next week on how to spend our tax dollars

MAINTAINING A SAFE AND RESPECTFUL WORKPLACE

Also on Monday’s agenda is an update from Steve Clark, the province’s Minister of Municipal Affairs and Housing with a reminder the government is consulting on how to strengthen accountability for municipal council members.
Clark advises, “We want to ensure that councillors and heads of council maintain a safe and respectful workplace and carry out their duties as elected officials ethically and responsibly.”
We’ve referenced this consultation a couple of times in the past month or so as the city has a dreadful track record over the past 20 years when it comes to harassing and questionable behaviour. Whether it be in the treasury, HR or engineering departments or, for that matter, on council itself, city hall has been described over the years as having a toxic work environment.

We’ve documented many circumstances in this corner.
Clark, along with Jill Dunlop, Associate Minister for Children and Women’s Issues, is seeking input from a council member from each municipality in the province.
Municipal representatives from southwestern Ontario will participate in a town hall session via phone on June 8.
Feedback is being sought on what changes or mechanisms are needed to better hold council members accountable for municipal code of conduct violations and how to effectively enforce these codes.
Also on the town hall agenda, the issue of whether a broader range of penalties for violations of the codes of conduct is needed and the circumstances in which these potential penalties could be applied.
Clark is asking the city to identify one member of council to participate in the session.
In addition, members of council and city hall staff can provide input through an online survey at https://www.ontario.ca/page/consultation-strengthening-accountability-municipal-council-members
Whether you participate or not, the information contained at that address is a valuable resource should you feel city hall is not a safe and respectful workplace.

Will a third Lake Margaret master plan have us swimming in reports?

Is the province interfering in or ensuring compliance with municipal codes of conduct?

IS UNCONTROLLED ACCESS TO LAKE MARGARET A GOOD IDEA? 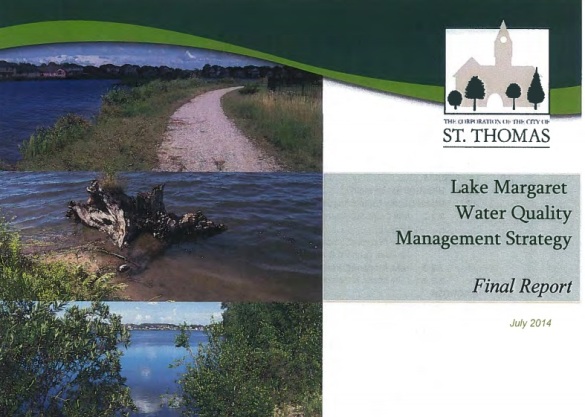 One person we haven’t heard from in all of this is Doug Tarry, whose family firm Doug Tarry Homes previously owned Lake Margaret before turning it over to the city in 2017.
He confirmed, “We jointly paid for two studies, the second of which was the second Dillon report and that’s the one I really had an issue with.
“And I fought the city on it because it didn’t recognize the source of the fecal content in the lake. I said this report is incomplete. It has to talk about Southdale Line and the water coming through the drain because clearly, people have bypassed their septic systems.
“Eventually we did get that cleared up.”
Tarry noted two reports were undertaken with both concluding, “We should just leave it be. So, when we donated it to the city, it was like, it’s yours. We hope you will follow what the recommendations were.”

“We just never saw a report that showed uncontrolled access was a good idea.”

He adds whatever happens now, the decision has to be that of the city.
“We did our time, we did our duty with it. We always envisioned it as being a conservation space. As a lake, it’s not that big.
“I wouldn’t be against a fishing derby. But, I’m not that overly fussy about ongoing unmonitored fishing because folks tend to be messy and they leave lines that the geese can swallow.
“How do you control that and I’ve never really seen a plan where that part was flushed out. How do you avoid the shoreline getting littered with lures and things like that?
“And, having everybody have the opportunity to push a canoe in, canoes will, if you keep doing it, start to erode the shoreline if you’re not careful.
“We just never saw a report that showed uncontrolled access was a good idea.”
Tarry continued, “We put our money into doing the trails and we see the benefit of having fully accessible multi-use trails throughout all of the city.
“And, we’re going to continue to advocate for the trails.”

‘A good public transit system is essential to a healthy community’ – a frustrated St. Thomas passenger

Will a third Lake Margaret master plan have us swimming in reports?

STOP WITH THE STOPS

Following up on her excellent commentary last week dealing with the city’s revitalized transit system, Isabell Nethercott forwards additional supporting material.
She writes, “I sat down with the old route maps and counted up 195 stops in 5 routes. The routes covered almost all of the city and there were very few areas where a stop was more than a block or two away.

“The new system, which is actually 6 routes with the on-demand route included, totals 138 stops (including 15 that are only available in the evenings and not in the daytime). However, because of the corridor nature of the routes rather than looping, they have installed several new stops that are essentially across the street from an existing stop.
“I counted more than 30 such stops, which means that half of them are pretty redundant and do not serve an area that is not already serviced. That reduces the number of useful stops even more.”
We can only hope those who are analyzing the merits and shortcomings of the transit pilot project are paying careful attention to the research put forth by this extremely knowledgeable transit user.
A couple of thoughts from this corner.
The transit system is operated by Voyago out of London. Has the city ever delved into how this operator stacks up with the drivers and transit users?
What is the turnover rate with drivers and we understand contract negotiations have been ongoing between them and Voyago, so what is the progress to date?

‘A good public transit system is essential to a healthy community’ – a frustrated St. Thomas passenger

Following up on our transit item last week, reader June Harris has a word of advice for decision-makers.

“It would make more sense if the people in their ivory towers who make all the decisions would ask for input from users. Sad to say it is very rarely done.”

“Good thought by the chief. Thanks. I do not understand why CMHA does not seem to be leading the charge for a mental health and addictions facility. And if they are, it would, to me, be good to include the public on its progress.”