Unveiled this past Monday (May 3) by St. Thomas developer Doug Tarry and Lindsay Rice of the YWCA St. Thomas-Elgin, Project Tiny Hope offers just that. Big on hope packaged up in quality, energy-efficient, supportive affordable housing for St. Thomas.
The undertaking to take shape at 21 Kains Street, the former home of Elgin Handles, will consist of 20 tiny homes and 20 units in a three-storey apartment building.
A dream come true for Tarry, who enthused you can’t beat the location.
“You’re five minutes from everything. You’ve got banking, grocery stores and you’re a minute from the trail system. We’re really pumped about this project.”
Doug Tarry Limited contributed $280,000 for cleanup of the brownfield site which is expected to begin later this year. He is partnering with the YWCA and Sanctuary Homes of Elgin-St. Thomas.
The latter donated $200,000 to purchase the lot.

Rice explained the timing of the presentation to council on the community that will come together on the large plot of land a couple of blocks north of Talbot Street.
“So now the YWCA owns 21 Kains Street and we thought this was a great opportunity to go to city council
to share our plans and talk about the 20 tiny homes and the apartment building. All of the really amazing net-zero and efficient ways Doug and his team are going to put together a great community for us.”

But it’s more than just much-needed homes, explained Rice.
“Doug’s team is looking at doing edible landscaping for us, so lots of fruit trees and obviously a vegetable garden, lots of herbs dispersed throughout the property. A nice green space for folks to access, whether they are living in the apartments or the tiny homes.”
Rice added, “We’re doing 20 units in the apartment building and the majority will be one-bedroom but we will have five or six, two-bedroom units. Similarly, the tiny homes we’re hoping to have about 15 loft-style and five ranch-style.”
So who is this community geared to? 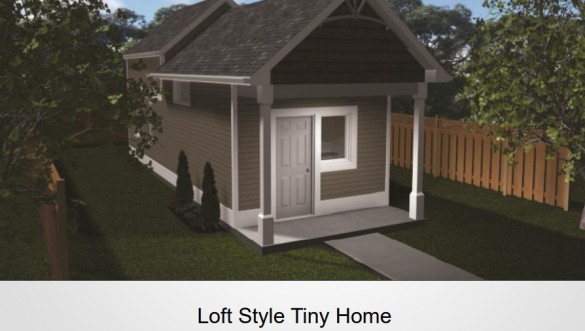 “Residents from Tiny Hope will come from all walks of life,” Rice explained to council Monday, “and, as such, those who may require case management will be supported by their existing support services or, if needed, introduced to a YWCA case manager with a focus on housing stability and personal well-being.
“Units will be offered at deeply affordable and below-market rental rates. We’re looking forward to working with the city on creating this sustainable housing development.
“A large community room and teaching kitchen will host group events and provide opportunities to build relationships, grow a sense of belonging and offer skill-based classes to residents.”
She continued, “These homes may be tiny but hold a big vision for the development of a stronger and more vibrant city.” 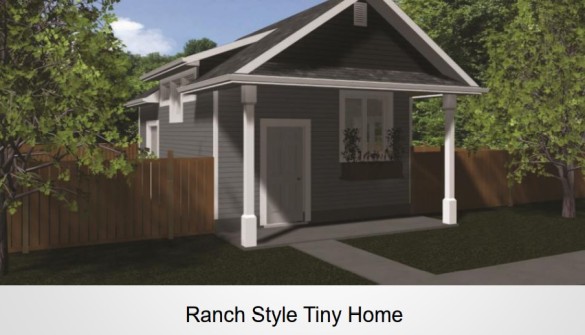 Tarry added, “A minimum of 30 per cent of all units will be set at deeply affordable rents with the remainder at slightly below market rent. Further, a minimum of 20 per cent of the units will be designed to meet CMHC accessible and barrier-free standards.”
Transformation of the brownfield site will start shortly, advised Rice.
“Remediation is going to be starting very soon so you are going to see changes with the building coming down and the land changing.”
The fun part comes next June when different area homebuilders will be involved in a race to each construct a tiny home in 36 hours.
Tarry advised more details will be revealed in the coming months.
Doug Tarry Homes is challenging the community to contribute to the capital campaign fund to reach the goal of raising $1.5 million toward the construction costs.
Donations at all levels qualify to receive a charitable tax receipt. For more information or to donate call 519-631-9800 or visit https://www.ywcaste.ca/donate/
To find out more about the project, visit https://www.ywcaste.ca/project-tiny-hope/?fbclid=IwAR1_2B9S0oLCm5VkhugTn_nfyHumBUI6MzY2ZIjv7AzaKDgOTFAAxZIlkzg

DOWN BUT NOT OUT, YET

There’s a last-minute surprise addition to Monday’s agenda. The door has opened slightly to reviving the downtown childcare centre written off last month by city council.
To re-cap, the 88-space facility proposed for St. Catharine Street, across from the former Colin McGregor Justice Building, could not be completed by this September as per provincial guidelines and so $2.6 million in funding had to be returned.

Well, this week Ministry of Education staff contacted the city regarding the now-shelved project and indicated it was willing to extend the completion deadline. However, no additional funding would be made available.
In his report to council, city manager Wendell Graves observes, “This would certainly be an important improvement to the information that the city was working with in April.”
Graves does not indicate how long of an extension the ministry is willing to provide.
And, there is that matter of increased construction cost. The estimated price tag of the childcare facility has escalated to at least $4 million.
So, to determine whether it is feasible to revive the proposed childcare facility Graves suggests to council, “with the tender documents complete and with the potential of an extended completion schedule it is being recommended that the city implement the tendering process.
“This would not commit the city to undertake the project should there be increased costs. It would leave open the possibility to move forward with the project with extended time should the tender be favourable.”
This whole process would be laughable if it wasn’t for the fact this is a desperately needed facility, more so as we begin to ease out of the pandemic and begin to kickstart the economy.
The province realizes the importance of such a facility because this is not the first timeline extension they have offered and don’t forget as well, they agreed to a shift in location from the original 230 Talbot Street site.

Childcare spaces disappear as the result of a ‘soft’ business case

Council will be asked to approve an expenditure of just over $1 million Monday for the purchase of body-worn cameras, conductive energy weapons (Tasers) and access to a digital evidence management system. The ten-year deal is with Axon which provided equipment for the body camera pilot project.
Over that four-month test period, an impressive amount of digital evidence was collected including 1,169 items for federal criminal matters, 1,342 items for provincial offence charges or investigations and 237 items for vehicle collisions. 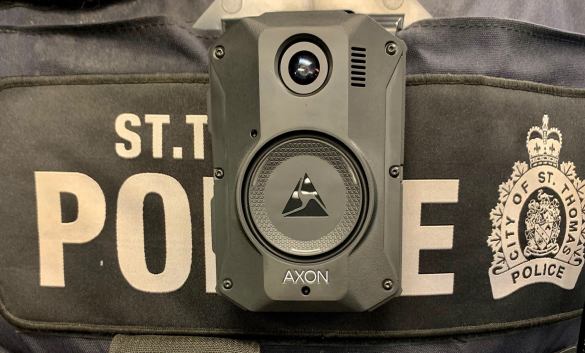 In his report to council Chief Chris Herridge pointed out, “During the COVID Freedom Rally (held in St. Thomas last fall), we were able to use the recently released Axon Respond capabilities allowing police Command Staff to view the live-stream footage and help monitor/coordinate a law enforcement response.”
Surveys were conducted before and after the pilot project with 418 responses. Approximately 93 per cent either
supported (22 per cent) it or highly supported (71 per cent) police wearing the body cameras.
As for the use of Tasers, Herridge correctly notes, “There should be no question that the CEW (less than lethal weapon) has become a very important tool available for officers to de-escalate violent situations.”
He concludes, “The Taser has been a game-changer in reducing potential deadly encounters and injuries.”
Look no further than to our southern neighbour.

Childcare spaces disappear as the result of a ‘soft’ business case

The artwork proposed for Pier 9 of the Michigan Central Railroad bridge got rave reviews at last Monday’s council meeting. All agree this will be a major tourist draw, especially as people drive right by on the way to and from Port Stanley.
There’s the slight matter of where do people stop and park for the obligatory photos and selfies? Seems parking was discussed at various levels with no defined solution.
Yes, a case of build it and they will come, parking not included.

On what should be permitted activities on Lake Margaret, Dave Mathers paints this picture.

“My wife and I walk our puppy around Lake Margaret on a fairly regular basis and many times we have seen people fishing, usually young people. What a great diversion from video gaming!!”

No shortage of comments on last week’s item on movie-themed artwork on Pier 9 of the Michigan Central Railroad bridge.

“As a nearby resident, I think this will bring colour to the area, especially in the dullness of winter.” – Deb Hardy

“Hey, that’s a great design for that space and location! I was initially worried it could be too garish and “cartoony”… but that’s classy.” – Dennis Kalichuk

“How cool is that! Can’t wait to get there to see in person!!” – Kate Little

And of course, there is always a dissenting voice.

“Seriously? How much did this cost?” – Jeff Sheather