Thanks to a critical partnership forged at the beginning of the year, the affordable housing inventory in St. Thomas will increase by more than 100 units in the next four years.
Teaming up with Indwell, the city can develop local solutions to homelessness.
That was the observation of Indwell CEO Jeff Neven Wednesday afternoon at the official groundbreaking of Phase 2 of the social services and housing hub evolving in the city’s west end.
Initially, it was hoped this building fronting Queen Street would begin to take shape in 2019, however, the numbers presented a soft business case and the project had to be put on hold, forcing the relocation of a childcare centre that was to be housed on-site.
As announced Wednesday, the four-storey structure expected to open in the spring of 2023 will contain 45 one-bedroom apartments and eventually a third fire hall.

During the ceremony in the vacant lot, Neven observed, “Indwell’s St. Thomas programs will foster community for people seeking to transform their lives from homelessness to engaged neighbours, from mental health challenges to flourishing wellness and from dependence to supported independence.”

Indwell has nearly 50 years of experience as a Christian charity that provides high-quality affordable supportive housing in several Ontario centres, including London, Woodstock, Simcoe and Hamilton.
This is not their first project in St. Thomas, however, as on the same day as the groundbreaking, we were able to tour Railway City Lofts on the second floor of the transit building at 614 Talbot.
The finishing touches are being put on the 15 micro-apartments with tenants expected to move in later this month.
These units are owned by the city and operated by Indwell. Eight staff members will be part of the Indwell interdisciplinary support team onsite including nursing, addiction and housing support. 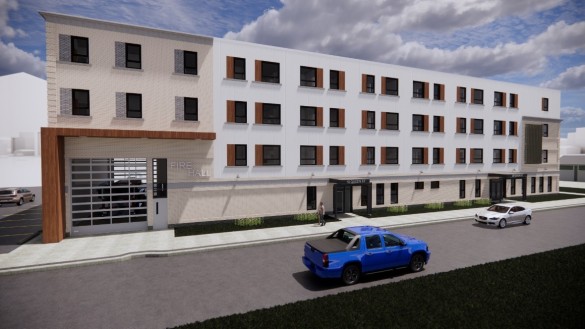 As Neven noted, a vital component to ending homelessness is not only supportive housing, but a professional support system to deal with trauma, mental illness, and/or substance use disorders.
He stressed at the groundbreaking, “We’re here because we believe in something. We’re here because we want something different and better for all the members of our community.
“This is values in action right here. When we put those shovels in the ground, we’re staking our claim that we want something different. We want something better for all of us.”
Mayor Joe Preston called the undertaking an example of the community’s compassion.
“You can be a successful economic, growing community and still be a compassionate community. And, we’re standing on the ground of compassion today.
“St. Thomas is a compassionate community moving forward on supportive housing with the great help of a team like Indwell.”
And, as it turns out, Phase 2 will be discussed at length during Monday’s (October 4) council meeting as outlined in the item below.

St. Thomas is in desperate need of affordable housing. Question is, who should build it?

The city’s ‘shiny, new nickel’ continues to generate questions on who should build affordable housing

GETTING DOWN TO THE NITTY-GRITTY OF PHASE 2

As noted in city manager Wendell Graves’ report to council Monday, the key to Phase 2 on Queen Street becoming a reality is for the project “to be built and owned by Indwell,” so they can leverage finances to provide for the long-term personal supports for the tenants.
Graves stresses the city will be a partner in the provision of the actual housing units, requiring an investment of approximately $3.5 million.
This is contingent on Indwell ensuring a certain number of the units are rent-geared-to-income (RGI) for a minimum of 20 years.
Graves indicated Indwell has applied for Rapid Housing Funding from upper-tier government and should that materialize, the city’s investment would be pared back to about $1.5 million.
Whatever the city’s financial stake, it would again be financed through the sale of some of its existing single-family social housing stock, as was the case with financing for Phase 1 of the social services and housing hub at 230 Talbot Street.
This could take some time and so the city has to be prepared to upfront finances from internal sources.
The city will also contribute in the neighbourhood of $450,000 for paving of the existing parking lot, internal sidewalks and landscaping.
Graves recommends this be paid using funds left over from Phase 1.
Then there is the issue of the firehall, which the city’s Positioned for Growth Study indicates may not be required for another three to five years. At that time the city will have to deal with what likely will be the delicate issue of staffing the station.
Also to be negotiated is a multi-year lease with Indwell as the owner of the land for use of the space.
Looking down the road, Graves advises for the firehall portion of the project, a roughed-in shell will be constructed.
He continues, “All of the major servicing amenities have been planned for when the actual future build-out of the space takes place.”
He estimates the cost of this ‘shell’ space at $1.5 million, with another $1 million or so to complete the station at some point in the future.
With construction expected to begin this fall, the city will also have to come up with front money for the ‘shell portion’ of the firehall which Graves recommends pulling from development charges.
From there, explains Graves, “when the build-out is planned, a financial model would be put in place to finance the project internally until it is offset with development charges.”
The total cost of Phase 2 is estimated at $13 million with Indwell responsible for the construction and operation of the facility as the owner.

The elimination of long-term homelessness is a key goal of the St. Thomas housing plan

A caring environment in a stable, permanent home is the foundation for transformation in people’s lives

THE ANIMATION OF A VACANT LOT

Its working name is Curtis Street Square, the site of the former police station and courthouse on St. Catharine Street and a grant application to proceed with the transformation into a people place has been approved.
The city will receive $672,000 from the province and $1.4 million from the federal government, which is 70 per cent of the $2.1 million cost of the redevelopment.

An additional $500,000 is in the form of a gift from the Estate of Donna Vera Evans Bushell to create a parkette to be known as Westlake-Evans Civic Park, a green space and activity centre in conjunction with St. Thomas Public Library to include an outdoor classroom and play area.
“We’re excited about being able to be part of the animation of this space,” enthused library CEO Heather Robinson at a ceremony held on the site in June of 2020.
“This is what libraries do. We have been looking for outdoor space to be able to do programming . . . and just be able to connect with our community in a new way.”
Council will be asked Monday to approve a bylaw to enter into a funding agreement to access the funds from the Canada Infrastructure Program.

Call it the Great Divide.
The impact the coronavirus has had on the population beyond illness and death.
How COVID-19 has mutated into a virus that pits individuals against each other along a political or philosophical divide.
A divide that has split political parties, communities and even families.
A meanness of spirit was touched upon Tuesday (Sept. 28) by Dr. Joyce Lock during a Southwestern Public Health media briefing.

“So, they have turned what has been a lethal virus into more like our seasonal viruses. Yes, you might still get sick but, in general, you will not be as seriously ill.”

A reporter asked her how can we calm things down in light of the introduction of proof of vaccination requirements.
She responded, “The message our health unit tries to convey is that stigma is not the best way to approach this issue.
“People, in general, try to make the best decision for their own health and the health of their loved ones. So, I think it is better for all of us to attempt to understand the issues for those people who have hesitance with the vaccine and to try and provide trustworthy and credible information.
“If you have someone in your neighbourhood or someone you work with who has concerns about the vaccine or is declining to take it, we encourage you to recommend them to legitimate sources of information such as those that are available at the health unit, the World Health Organization and from the Province of Ontario.
“There is a lot of misinformation out there and some of tends to look highly credible, and so can easily raise concerns.
“It is incumbent upon all of us to be tolerant, not to stigmatize and to continue to try and direct people to the sources of information which are the most valid.”
And yes, people who have been vaccinated can still be impacted by the virus, but to a much lesser degree that generally will keep individuals from being hospitalized.
Dr. Lock continued, “We know we will not be able to get rid of the COVID virus. It’s going to be part of the germs in our environment.
“But what we do not want is to have people die from it. We don’t want people to end up in ICU. We don’t want people to end up with long COVID syndrome.
“The vaccines prevent serious illness, they prevent hospitalizations.
“So, they have turned what has been a lethal virus into more like our seasonal viruses. Yes, you might still get sick but, in general, you will not be as seriously ill. And you will not be as ill for as long a time. And you will not be able to spread it for as long as you would without the vaccine.”

In response to our profile on Chippewas of the Thames artist Nancy Deleary and her stunning mural on the west wall of St. Thomas Public Libray, Leticia Amanda forwards the following observation.

And, on a personal note, Deb Hardy submitted the following in reference to National Day For Truth and Reconciliation.

“I’ll be working and it’s also my son’s 37th birthday. As my grandmother was indigenous, I will be thinking and wishing for better days.”