Progressive by nature is a catchy marketing slogan employed by the County of Elgin that, unfortunately, is not readily applicable to all members of St. Thomas council.
That was painfully evident Monday when a motion to allow internet voting during a portion of the advance polling period in the October municipal election was defeated on a 4-4 vote.
Aldermen Cliff Barwick, Tom Johnston, Gord Campbell and Dave Warden presented some of the flimsiest arguments possible to maintain the status quo, i.e. the traditional paper ballot.
Had this been evidence in a court case it would have been dismissed as not germane.
The concern seniors would not vote because they prefer the traditional ballot over computer voting is a smoke screen since the paper ballot would remain as the primary method of casting one’s vote.

The claim by Campbell and Warden seniors don’t use computers is an insult to the great number of that population who demonstrate remarkable proficiency with electronic gadgets. In his time spent at the St. Thomas Seniors Centre, Warden should know better.
Barwick’s comment there is no info to support an increase in voter turnout doesn’t pass the litmus test.
In 2010, Stratford undertook a completely paperless election with constituents casting their ballots by phone, via the internet and in electronic polling booths.
Their turnout increased by two per cent and it will be in place again this year.
“Building on the city’s direction towards recognition as a digital community, the use of Internet/telephone voting improves convenience for electors, (and) enhances accessibility for persons with disabilities,” states a report from city clerk Joan Thomson, as quoted at southwesternontario.ca.
As to the $30,000 proposal to introduce internet voting this fall, that works out to $7,500 per year over the four-year term of council.
The city wastes many times that amount on consulting reports, revisiting decisions and backtracking, as witness the costs associated with the police headquarters.
Reader Joe Caverly presents an intriguing perspective.
“Until the people who run for elected office become worthy to vote for, more people will decline their right to vote,” he suggests. “Voting by mail, phone, or Internet, will not stop the decline in people casting votes.”
Is that where we should be directing our attention? Too many voters disillusioned with the political process at all levels of government.
Take a look at our existing council. How many of these sitting members do you really want back for another four years?
Maybe that’s the incentive needed to get people off their duffs to start the pruning process.

PUT BRAIN IN GEAR . . .
While his observation may indeed be based in fact, London Coun. Stephen Orser’s comment that workers who have to drive to St. Thomas to work won’t be on welfare is a cheap shot at the city and attempts by administration and staff to attract new business to what has been one of the most economically depressed regions in the province following the 2008 manufacturing meltdown. 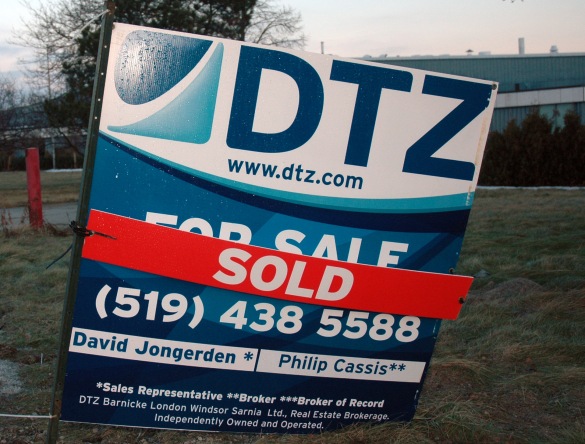 A sold sign now appears in front of the former A. Schulman Canada plant on South Edgeware. The plant has been bought by Sle-Co Plastics of London.

Orser was referring to the decision by London’s Sle-Co Plastics to look to St. Thomas for its expansion plans and his comment appears to be a case of sour grapes.
Considering Orser is an Aylmer boy, you would think he’d be a little more up to speed on the state of affairs in St. Thomas and Elgin.
In the past year, Hydro One moved some of their operations here from London and Masco went so far as to consolidate several of their ventures into the former Sterling Truck plant.
Seems these three businesses see the value in doing business in St. Thomas.
Too bad Orser has to resort to trash-talking the neighbours.
“We’re all in this together,” responded Mayor Heather Jackson on Thursday.
“And for whatever reason, that industry is leaving London and coming here. It’s still in the region, they’re not moving to the U.S. It’s still jobs in the region and that’s what really bothers me. Maybe you need to think about that before making negative comments like that.”
As to the welfare remark, Jackson has a piece of advice for Orser: “Think before you open your mouth.”
That may prove difficult in the case of Orser, who has been described as “the clown prince of council” by our QMI Agency cohort, Chip Martin.

FINALLY TURNING THE CORNER
Later in the conversation with Jackson, she noted the city is almost out of industrial space.
“The big spaces are almost gone,” she advised. “We’ve got enquiries in on properties and we’re going to be at the point where council and the EDC are going to have to look at land acquisition.
“It takes three to five years to get it ready and we don’t want to be in a situation where we’re stuck and don’t have something. Things are bouncing back. It’s frustrating when we get those kind of comments from out neighbours.”

QUOTE OF THE WEEK
“Too bad and to think a retired teacher didn’t encourage this for the most important voter (young adult), change is good not bad!”
T-J reader Jil Crosby posting on line after Ald. Cliff Barwick voted against a motion to allow internet voting during the advance polling period in the October municipal vote.

2 thoughts on “October is a good month for pruning”