Not unlike the vehicles using them, the city’s consolidated courthouse parking program has required several major tuneups over the past year or so.
And the tinkering is nowhere near completion, based on the frustration level at Metcalfe Gardens where staff, residents and visitors are calling for a policy overhaul.
Prior to the opening of the new court facility in March, 2014, friends and relatives visiting the seniors residence could always park on the surrounding streets with nary a worry of being ticketed.
All that changed when the city and province reached an agreement whereby 315 parking spaces would be provided within a 300-metre radius of the courthouse.
That led to construction of the Crocker St. parking lot and several along the north side of Centre St., combined with a major crackdown on free on-street parking in the courthouse neighbourhood.
Area residents and businesses began voicing their opposition shortly after the court opening and that led to a major revamp in June, 2014 when city council approved a series of recommendations, including the reinstatement of two-hour and 10-hour restricted parking zones on Centre St. and the removal of a restricted neighbourhood parking zone on the west side of Hincks St.

At that time, then alderman Gord Campbell observed, “I honestly believe that it (the program) has been a detriment to some of the businesses along Centre St. So I think the sooner we can get the information out that this is going to be rectified, certainly the better it’s going to be for those businesses.”
Well Metcalfe Gardens is a rather important business player in the city — with about 100 residents and a staff of 60 — and the mayor and council would do well to address the concerns of general manager Lori Lackey, her staff and residents.
Especially with regard to the grossly underused Crocker St. lot, which one resident noted averages 12 to 14 vehicles each week day.
Lackey would love the opportunity to use some of those vacant spots.
“People would even be willing to pay for parking if they are visiting,” she noted, “if they could get parking close to the building.”
Ostensibly the lot is for courthouse staff, however Times-Journal reporter Jennifer Bieman received an email Thursday from Infrastructure Ontario indicating it is open to discussion with the city regarding parking.
Because apart from the Crocker St. lot, the city has the wherewithal to revamp the parking strategy on its own, as was the case with the adjustments a year ago.
Frustrated by the lack of action on the city’s part, a community meeting will be held 3 p.m. Monday at Metcalfe Gardens.
Don’t expect to corner the mayor at this gathering . . . she has already indicated she will not be in attendance.
A decided change in attitude from last fall’s mayoral election campaign when she attended Metcalfe Gardens soliciting votes from residents with the assurance the parking problem would be addressed.
A promise those same residents have not forgotten.

LACK OF INTEREST?
Quite the spirited deputation at Monday’s council meeting as Pauline Wimbush vented her frustrations on living next door to an abandoned hovel. 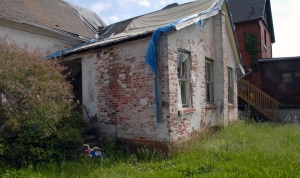 And now, Pauline is challenged on the veracity of her claim she had contact with the mayor’s office at some point last year on the status of 46 Kains St.
Pauline feels, in essence, she is being branded a liar.
Well she is not backing down from what she told this corner early last month.
“Wendell (CAO Wendell Graves) seemed to take an interest in it (her concerns about the abandoned residence).
“I called the mayor too and the mayor’s receptionist called me and said the mayor didn’t know anything about this house and she cancelled the appointment.
“I felt that showed very poor and weak leadership. She should have said, ‘I’ll look into that and make an appointment with you later on when I know more about it.’ Or, she could have appointed somebody to look into it.”
In fact, when Pauline met with the CAO, city staff and fire chief Rob Broadbent a week ago Friday, the mayor was conspicuous by her absence.
Would it have been too much for the mayor to pop in for a moment, introduce herself and acknowledge the city was acting upon the matter?
And if the meeting did not fit into the mayor’s schedule, then re-book it. After all it was the CAO who contacted Pauline to arrange a day and time in the first place.

FROM BAD TO WORSE
A month ago, we documented the claims of workplace harassment from ‘Dave’, a city employee who has received nothing in the way of satisfaction from human resources manager Graham Dart.

To recap, Dave came to us with situations of harassment involving fellow employees and managers — both verbal and physical in nature.
“I’m just totally shocked at what’s happened to this place in the last 15 years,” he advised. “I’ve gone to the union and we’ve exhausted that. We’ve gone as far as we can.”
That includes face-to-face meetings with the HR department at city hall.
Well in correspondence from Dave this week, he reiterates how rampant harassing behaviour has become in certain city departments.
While dealing with these accusations is the domain of the HR department, Dave questions the role of city council.
“I don’t think council has demonstrated any concern over this either,” he writes.
“This is not going away and neither are we,” he advises.
Certainly no member of council has stepped up to the plate as was the case with former alderman Campbell who went to bat for several female employees ‘demoralized’ by alleged sexual harassment in the treasury department.
We’ll follow up with this next week.

“Where the frustration comes in is that the city keeps promising they are going to do something about it. We’re seeing no activity at coming up with more of a resolution.”
Lori Lackey, Metcalfe Gardens general manager, on concerns expressed by staff, residents and visitors over restrictive parking regulations in the courthouse area.
City Scope appears Saturday in the Times-Journal. Questions and comments may be emailed to ian.mccallum@sunmedia.ca.