The frustration was clearly evident in the voice of Pauline Wimbush. “It’s like having a child or a pet that you are neglecting.”

Friday was her “day in court,” so to speak, when she was invited to city hall to present her concerns about living next door to a derelict house at 46 Kains St. — whose owner continues to pay property taxes but resides in Holland.

All sympathized with Wimbush but were in agreement there is no quick fix.

To the chagrin of Wimbush who, due to increasing difficulty navigating stairs in her large home, is anxious to sell and move to a single-storey residence.

The fire department is the most recent player in this drawn-out, four-year battle between Wimbush, the city and the absentee owner.

Broadbent confirmed an order regarding his department’s concerns was written up on July 6 and the owner has 30 days to respond.

If the owner fails to comply, Broadbent has the ability to apply to a judge for permission to board up the structure but that would be the extent of action allowed since it has been determined it is not a fire hazard.

Meantime, Peck advised the city has issued a property standards order following an external inspection of the house.

In spite of protestations from Wimbush, Peck insisted the house remains repairable.

“If the roof is caving in, the roof can be removed and rebuilt,” he advised. “The bricks can be re-pointed. We’re frustrated too, but if anybody wants to spend the money on it, it is repairable.

“It’s not like we can go in and order demolition of the place. It’s their money and it’s their property and if they want to put the money into it then it’s repairable.”

Not exactly what Wimbush wanted to hear.

“Why doesn’t the city go ahead and let the owner know if he doesn’t repair it by a certain time the city will go ahead and bulldoze it. “The cost can be applied to his taxes. He’s living in Holland and he’s not going to come over here and do anything to that house. It’s quite obvious.”

You knew it was only a matter of time before Wimbush introduced a sensitive four-letter word into the conversation: Alma.

The former college for girls was also in the throes of demolition by neglect only to finally succumb to arsonists.

“Alma College caught on fire,” Wimbush reminded, “and I’m not saying that is going to happen. But what if it does? Who is going to be responsible for that.

“No to mention the rodents and vermin. That’s a health and safety issue being right next door to Arthur Voaden (Secondary School).”

It’s a complicated minefield and it could be repeated in any number of neighbourhoods in St. Thomas, but as Graves reminded, “it’s just not automatic for us to send a bulldozer in.”

At this point, noted the CAO, the best game plan is to keep the momentum going with the two existing building orders now in play.

Although Broadbent likely summed it up best.

“Everybody in this room would love to see this go away.”

In the meantime, Wimbush will spend the weekend circulating a petition in advance of her deputation to city council Monday evening.

An opportunity for Wimbush to finally get the mayor’s attention, face to face.

Last month we documented the frustrations of several contractors being hassled over parking restrictions downtown on Talbot St. 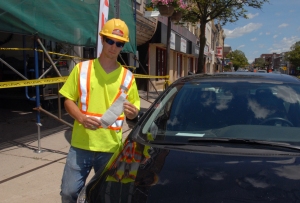 That prompted this observation from reader Dave Mathers.

“Where are the mayor and members of council in this sad state of affairs? They are always claiming they want to revitalize the city’s downtown but then this type of abject stupidity rears it’s head, even when somebody is trying to make the downtown better. “Common sense seems to have ‘left the building’ at city hall. Sad.”

It has been quiet on the new police station front over the spring but behind the scene, the project is proceeding at a healthy pace.

Proposed St. Thomas police station to be built adjacent to the Timken Centre.

The tendering process is underway and the hope, according to CAO Wendell Graves, is to begin site preparation and the provision of services this fall.

All of which has prompted a letter appearing in the agenda for Monday’s council meeting from St. Thomas Police Chief Darryl Pinnell.

“As the project enters into the next phase,” writes Pinnell, “it has become apparent that there is a need to hire a project manager who would serve as a liaison between the city, police service and the various contractors, trades and companies involved in the project.”

Pinnell continues, “The ideal person for this position would have a background in policing and an intimate knowledge of the daily operations of the St. Thomas Police Service. The ideal person would also have

the best interests of the service, the city and the taxpayers in mind.”

The chief notes the salary for the project manager could be paid out of the St. Thomas Police Service operating budget over a two-year period.

The hiring of a project manager played a key role in the new home of Elgin St. Thomas Public Health coming in on schedule and under budget by a considerable amount.

“If businesses can’t survive at the prices that are being charged here, it comes as no surprise that they look to go elsewhere.”

St. Thomas and District Chamber of Commerce president Bob Hammersley commenting on the release this week of The Empowering Ontario report by the Ontario Chamber of Commerce, which paints a grim picture of the impact rising electricity rates have on businesses in the province.

One thought on “Another case of demolition by neglect”