Picking up from Monday’s 2021 city budget deliberations, council had directed administration to pare back the municipal property tax levy from 2.48 per cent to 1.5 per cent in deference to the economic impact on ratepayers of the coronavirus.
That request by council translated into cutting about $572,000 from the proposed capital and operating budgets.
Council indicated a priority would be to maintain as much as possible the tax-base contribution to the capital budget and minimize the impact on service delivery in the operating budget.
In other words, find the savings without cutting services.
To deliver on council’s request city manager Wendell Graves and department heads held a pair of meetings on Tuesday of this week to ferret out possible sources of savings.
As a result, council grants to community groups and organizations will be cut by $75,000 in the new year. Leaving about $210,000 in the grant kitty to distribute in 2021.
It was agreed to reduce Community Improvement Program funding by $200,000.

END_OF_DOCUMENT_TOKEN_TO_BE_REPLACED

The city likes to refer to it as “unintended consequences,” we prefer a consequential collapse in communication.
We’re referring, of course, to last month’s surprise announcement the city is to proceed with a procurement process to designate new operators for the EarlyON system in St. Thomas-Elgin.
Community Living Elgin (CLE) has been the agency to deliver the EarlyON program since July of 2018.
One of the “unintended consequences” is the realization the city cannot possibly have the new delivery model in place for the Jan. 1, 2021 launch.
This is required to offer a seamless transition from the old model as the CLE agreement with the city expires at the end of this year.
And so the existing agreement will have to be extended into the new year in order to get the new operator(s) up to speed.

END_OF_DOCUMENT_TOKEN_TO_BE_REPLACED

Earlier this week, Elgin-Middlesex-London MPP Jeff Yurek announced $928,000 in funding to support the purchase of a new building for a permanent emergency shelter.
A facility Yurek noted that will be, “a stable facility from which dedicated local service providers can continue to carry out their important, lifesaving work.”
Such a shelter was one of the areas touched upon last month during a meeting between Mayor Joe Preston and downtown merchants who vented their frustration with the lack of attention paid to the plight of the homeless in the core area.
What Preston referred to as “solving the problems of the people causing the problems.”

END_OF_DOCUMENT_TOKEN_TO_BE_REPLACED

As hoped for, the city this week released the request for proposal (RFP) for the delivery of the EarlyON program in St. Thomas and Elgin county.
While it provides some insight and clarification on the new direction, there are questions and concerns on the part of the city, based on the two-page addendum that accompanies the RFP document.
The preamble notes, “The City of St. Thomas is issuing this Request for Proposal (RFP) to seek successful proponents who will operate EarlyON Child and Family Centres in St. Thomas and Elgin County.
“For the purposes of the delivery of EarlyON Child and Family Centre programs and services, three distinct Service Delivery Zones have been created: West, Central and East.”

END_OF_DOCUMENT_TOKEN_TO_BE_REPLACED

Oh, how those “unintended consequences” can come back to bite you big time.
While members of council were woefully negligent in their handling of the procurement process to designate three operators for the
EarlyON system in St. Thomas-Elgin, it is doubtful the report from Teresa Sulowski, supervisor of children’s services will be revisited.
However it would appear, via a conversation this week with city manager Wendell Graves, a re-think on portions of the process may be in the offing, if not already underway.

END_OF_DOCUMENT_TOKEN_TO_BE_REPLACED

The recommendation before council at the Sept. 21 meeting appeared straightforward enough: That council grants permission to proceed with a procurement process to designate three operators for the
EarlyON system in St. Thomas-Elgin.
Now, either the mayor and councillors did not fully read the report from Teresa Sulowski, supervisor of children’s services – it was two pages in length – or they failed to comprehend the possible implications of what she is proposing.
In any event, the opportunity was there for any member of council to seek clarification or request further information.
Instead, the far-reaching report was approved in a matter of 38 seconds with nary a question or comment.

END_OF_DOCUMENT_TOKEN_TO_BE_REPLACED 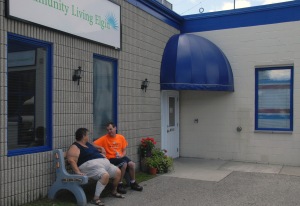 Less than two weeks after the results of a provincial review were released, the executive director of Community Living Elgin has announced his retirement.

In a memo issued to staff Tuesday, board president Robert Ashcroft advised Tom McCallum will retire at the end of December after a 21-year stint at the helm of Community Living Elgin, an organization he first joined in 1976.

Ashcroft noted Michelle Palmer, Community Living London executive director, has agreed to provide interim leadership in St. Thomas for up to one year.

Ashcroft praised McCallum for maintaining “a relationship with the people he originally supported over the past 39 years and watched them grow from young children to the successful adults they are today.” END_OF_DOCUMENT_TOKEN_TO_BE_REPLACED

As retirement announcements go, this was an odd one.
The Community Living Elgin memorandum popped up in mysterious fashion at the City Scope inbox to announce executive director Tom McCallum has opted to retire from the organization.
The timing of his decision raised eyebrows in that Community Living Elgin appeared to have fared well in a Ministry of Community and Social Services’ financial and accountability review, the results of which were released at the end of November.

END_OF_DOCUMENT_TOKEN_TO_BE_REPLACED

With the departure Wednesday of former Ascent CEO Ron Osborne, board chairman John Laverty takes over the helm on a temporary basis. It will be his responsibility to guide the process that will result in the hiring of an individual tasked with winching the utility out of the financial quagmire in which it finds itself to the tune of $14 million in losses and money owing to the city last year.
Not to mention its long-term debt of what, another $6 million or so?
We caught up with John this week and what many may not realize is the St. Thomas resident was a former public utilities commissioner who has been “kicking around the utility industry on the governance side since 1991.”
He advised the process of hiring a new CEO started almost immediately.
“We decide as a board whether we’re going to use a headhunter or not.” END_OF_DOCUMENT_TOKEN_TO_BE_REPLACED