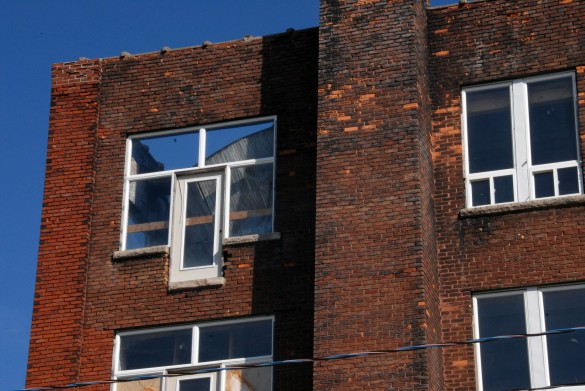 It was a key factor in the defeat of Cliff Barwick in the 2010 mayoral vote and now the Sutherland Press building is back in the news to haunt Mayor Heather Jackson and city staff.

At a hastily called media conference Tuesday afternoon, CAO Wendell Graves and Jackson advised they have “significant concerns” about the structural integrity of the Talbot St. structure following a roof collapse Friday at the southwest corner of the building, east of Moore St.

The city has hired a structural engineer to update staff on measures needed to minimize risk to the public until the future of the building, constructed around 1910, is determined.

The derelict structure, owned by David McGee in Toronto, has stood open to the elements for years and is a significant example of the city’s early industrial heritage.

For the time being, Talbot St. will remain open to traffic, unlike the nine-month road closure/blockage in 2008 when the city and McGee became entangled in a legal battle. At that time, the city had entered into a $150,000 contract to demolish the boxy structure.

To further protect the public, Graves noted pedestrian barricades will be put up along the south sidewalk, Moore St. will be closed south of Talbot St. to the parking lot entrance and operations out of the Talbot St. transit centre will be relocated to a yet-to-be-determined location.

In addition, a building order was issued Tuesday to McGee, who originally had hoped to convert the structure into a loft condominium project before settling on rental units geared to seniors.

Graves indicated he will update the status of the building and any necessary changes to traffic and pedestrian flow on Wednesday.

It’s not the first time in recent memory the crumbling building has garnered headlines.

Days before the 2010 municipal election, McGee served notice he was suing the City of St. Thomas, Barwick, St. Thomas Police and other defendants for $3 million for punitive damages and aggravated damage as well as “mental distress, economic interference and, specifically, loss of income” for what he claimed was “unnecessary demolition” of the north part of the top floor in July, 2008.

McGee insisted the move was not political but it cast a pall over the mayoral race which saw Jackson defeat the incumbent Barwick.

Seven months after his defeat, Barwick insisted, “In my mind it was a smear campaign.”

McGee’s claim was struck by Justice L.C. Leitch in Ontario Superior Court of Justice, London in December of 2011.