Held over for another big year . . . The Sutherland Saga.

Watch the City of St. Thomas and David McGee, owner of Sutherland Lofts, pick up where they left off in 2016 . . . back in court.

That’s right, after issuing another work order late in October against the owner of the four-storey Sutherland Press building, McGee has tossed it back in the city’s corner with the declaration, see you in court.

“They have until Dec. 15 to provide a detailed work plan and schedule to get the thing remedied and then work has to commence by the 9th of January,” Graves told this corner.
The thing in question is immediate replacement of spalling or damaged bricks and securing the roof, which suffered a partial collapse more than a year ago.

When the order was issued, Graves fully anticipated the work order might be challenged.

And that’s exactly what happened Thursday.

“It looks like we’ll be in front of a judge Dec. 12,” advised Graves. That appearance won’t be a full hearing, instead to set a court date some time in the new year to resume the more than eight-year battle.

To recap, on Sept. 27 at the Elgin County Courthouse, Justice Gorman ruled a notice issued by the city in March of this year warning of demolition of the structure dating back to 1913 for failure to comply with a previous work order was null and void due to improper delivery to McGee and lack of specificity on the part of the city.

In a separate stream, the city is appealing that decision.

That lack of specificity is the basis for McGee’s latest appeal.

So saying the roof is in need of repair “is not helpful,” advised M’Garry, who added the city’s time frame for completion of remediation “is just not realistic.”

She reminded, “We’re back in the same place we were last March.”

The more things change, the more they remain the same.

There’s no shortage of work orders in the Sutherland Saga

We love the feistiness as she proclaims, “If you can’t educate, agitate.”

As head of the city’s Animal Welfare Select Committee, Jackson organized the session to discuss “animal welfare in our community and make recommendations to council.”

A contentious issue in light of what Jackson refers to as “a big, bad mess” in St. Thomas and Elgin with a growing number of incidents of animal abuse including a case wending its way through the courts involving two young people, Payton Garner and Cody Yeo, facing three counts each of causing injury to an animal.

The charges stem from the discovery of the bodies of two dogs in a Confederation Drive apartment in August.

A graphic presentation by Brandon James from the Ontario Society for the Prevention of Cruelty to Animals proved timely as council debates upgrades to the animal shelter on Burwell Road. A facility which four other municipalities — Malahide, Aylmer, Central Elgin and Southwold — have entered into agreements with the city for the provision of animal services.

James made it very clear the OSPCA has jurisdiction over the animal shelter and there are minimum standards the city must meet.

What should be a decided game-changer as Jackson deals with what has been in the past a lackadaisical attitude toward animal welfare.

There’s no shortage of work orders in the Sutherland Saga

More questions than answers as hospital puts out hand 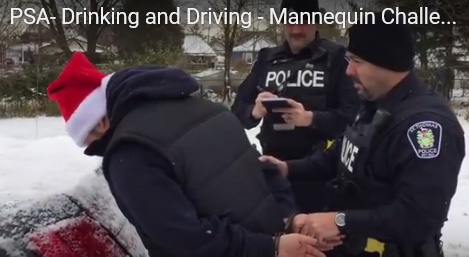 Always amazed at the creative talent that calls St. Thomas home. And new on the scene this week the Drinking and Driving Mannequin Challenge performed by members of the St. Thomas Police Service. Who knew these are more than just men and women in blue.

A tip of the director’s hat to Const. Jeff DeLeeuw who filmed the entire sequence on his cell phone. In one take, no less, he tells us.

Might we add Doug Walker looks right at home presiding over matters.

See for yourself here http://bit.ly/2fx9VJ7.

Well done all of you!

Equally as memorable . . . the message.

“It’s a continual, ongoing and growing movement … They’re clearly still a non-willing host. There’s savings to be made in the system and I think the premier can show good faith, not just by speaking, but with her actions, to halt the project.”