It was what we called in radio, a cluster-buster.

A Tweet from Police Chief Darryl Pinnell Friday morning sure cut through the clutter.

Sounded for all the world like they’re delving into carding, a trending topic up the road in London.

A phone call to St. Thomas Police media contact, Const. Jeff DeLeeuw, confirmed they were in training but it’s not what you think.

“It’s all about the new legislation that has been brought out and the guidelines we have to follow with what people are calling carding or street checks.”

DeLeeuw assured carding is not general practice in St. Thomas. 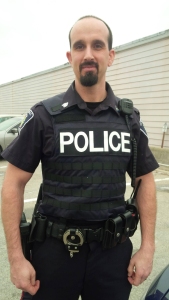 “No, because most of our calls and most of our interaction with the public is generally a complaint from someone who has called us. We go and check it out.

“What we’re learning today is you just can’t randomly roll up on someone and asking their name, birthday and where they live. You need to have a cause for that to happen. If you choose to do that and the person says ‘Get lost,’ we have to take that as an answer and walk away.”

And, you would have to issue that person a receipt, stressed DeLeeuw.

“It would give my name, my badge number, the date and the time of our interaction and if you had a complaint about anything I asked a complaint section is on the back of it.”

He advised the new legislation being discussed Friday does not apply to situations of a police investigation into an incident. Instead it is directed to situations where “you have no reason to pull someone over, you just saw who was driving and you pull them over based on race.

The purpose of the new legislation, he explained, is “regulated practice to ensure consistency in and across the province.”

No doubt there will be those out there who swear they have been randomly stopped and questioned.

You hear some dandies pawned off as fact during a typical council meeting and there was no shortage of head scratchers on Monday.

In spite of a recommendation more than a dozen years ago in the McCarthy-Tetrault report authorized by the council at the time calling for a reduction to seven members around the horseshoe, some members of the present-day assemblage feel they are overworked and that warrants the addition of an eighth councillor.

With ratepayers picking up the tab for an additional $20,000 or so.

And don’t forget, this council has done away with the committee structure that proved a time-eater in the past.

But it’s the logic put forth by one or two councillors that is truly baffling.

It would end the prospect of tie votes, they point out, because we would have an odd number of members.

Not so fast. It is not unheard of to have a member of council absent at a given meeting, or perhaps an individual declares a conflict of interest and you are again dealing with an even number of vote casters.

But even that is irrelevant as there is no such beast as a tie vote in council chambers.

Should a motion brought forward end up in a 4-4 vote, the motion is defeated as it did not gain the support of the majority of council.

Like most hockey leagues, there are no tie games.

And, discussion of returning to a municipal ward system was a forum in which some councillors displayed their lack of knowledge of the jurisdiction they profess to serve.

Several members again huffed the city is too small for division into wards.

Who better to consult than former mayor Steve Peters, who responded in prompt and thorough fashion.

“The ward system caused an east west divide over a couple of issues. In the 1880’s, the city was split on the location of the market and in the 1890’s over the location of city hall.”

You know, a quick phone call to the likes of Steve or Don Cosens or former mayor Cliff Barwick would have proved most enlightening. This city is blessed with wonderful human resources of their ilk.

And we won’t even touch upon the sales pitch for a full-time mayor. Every other head of council in the past has been able to juggle responsibilities, many while holding down full-time employment elsewhere.

Of course, I guess it all depends on how many meetings and other commitments you attend to.

History and findings of the McCarthy-Tetrault report

GOOD TO BE HOME

And why shouldn’t she be, the animal farm next door is gone. She’s no longer living next door to a “disaster.”

She lives in a well-maintained, tree-shaded 1890’s-era house on Kains Street which, up until last month, overlooked what could only be described as “a vermin-infested tragedy in waiting,” as this corner portrayed the derelict cottage-style house next door in a reference earlier this year.

Well the abandoned house was purchased by city developer Walter Ostojic in a tax sale and immediately levelled.

Speaking this week to his son, Peter Ostojic, he advises they will build a duplex on the property adjacent to Arthur Voaden Secondary School. They undertook a similar project recently on Balaclava Street.

Ah, about that $30 million price tag

Diplomacy has disappeared at the top

When will mayor deliver on her parking promise?

Another case of demolition by neglect

For homeless advocate Jason McComb, it’s awareness not the raising of funds

What’s it like living next door to a disaster

City Scope appears Saturday in the St. Thomas Times-Journal. Questions and comments may be emailed to imccallum@postmedia.com. Visit us on Facebook