Don’t believe a drum roll was ordered but years of bickering, speculating and fear-mongering were laid to rest Thursday at city hall.
That’s when tenders for construction of the new St. Thomas Police Service headquarters were opened with 11 contractors pre-qualified and nine of those submitting quotes.
At this point in the process, the lowest bid is $10.7 million from a Brampton firm, M.J. Dixon Construction.
“The Ventin Group, our architects, have all of the information and will be analyzing all of that to make sure there wasn’t anything missing from the tenders and qualifying all of that like we do with all tenders,” CAO Wendell Graves explained on Friday.
“It will take them a couple of days to do that,” Wendell continued. “Our intention is to have a report to council for Aug. 10 relating to the tender.
Wendell also noted the tender included not only the police station itself, but full construction of the extended Third Ave. intersection up to the police station.
“So all of the underground services and creation of the T-intersection,” Wendell advised. “So council will see that in two numbers.”

Proposed St. Thomas police station to be build adjacent to the Timken Centre.

That is council will be made aware of construction cost and the intersection hookup cost.
In other words, that $10.7 million lowest bid is for construction of the police headquarters west of the Timken Centre and a new intersection with the existing Third Ave., running north from Wellington St.
So what is next?
“Should council be in a position to award a tender,” Wendell continued, “we will lock down a construction schedule . . . beginning with site preparation and site servicing.
We understand the highest tender was in the $13 million range.
How odd none of the bids approached the $30-million figure — or were even close to $20 million for that matter — as warned by a member of the previous council and his cohort who went so far as to produce a video warning of the cataclysmic cost of construction.

LONG OVERDUE
An announcement Wednesday the federal government will contribute $167,000 toward reconnection of the two segments of the former London & Port Stanley Railway tracks north of Kains St. is an historic announcement on more than one front. 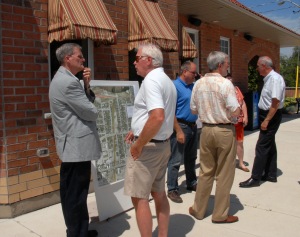 Members of the public look at plans for the expansion of the L&PS railway corridor after $166,667 in federal funding was announced for the project. It’s exepcted to be completed by 2017, in time for the 150th anniversary of Confederation.

And no one is happier than Dan Vernackt, president of Port Stanley Terminal Rail (PSTR) which operates tourist trains on the southern segment of track from St. Thomas Parkside to Port Stanley.
In an email sent this way, Dan also updates the historical context of the rail corridor over the last three decades.
We’ll let Dan explain.
“Yes I am pleased that this will be happening,” he writes. “It finals off a process started by PSTR going back as far as 1983. It was always the hope of the founding directors to keep a connection to the outside world. PSTR over the last 32 years has been successful in that we own the land from Parkside Dr. south to Port, and with the help of the province and the city, the corridor has been preserved to the connecting lands north of Kains St.
“It was PSTR’s continual involvement that halted the illegal tearout of the tracks from CN St. Thomas north down to Parkside. PSTR won an injunction and was able to have a stop-work notice hand delivered to the CN tearout crew just north of Wellington St. back in May of 1989.
“Through an order won by PSTR in 1992, a connection to the outside world is still legally binding. With a connection in place, it opens up the possibility for equipment to be delivered to both PSTR and the railway museum and a chance in the future to have passenger train operations to London.
“Hard to say what form this will take, but at least the tracks will once again be connected.”
Talk about perseverance.
Not to take away from Wednesday’s euphoria, but there was a rather large elephant in the room that was not addressed.
In order to operate tourist trains north from St. Thomas, an agreement will have to be arranged with CN, which operates a daily train down from London and back again. That ties up the line from early afternoon until around 7 p.m.
Can’t see them being overly willing to extend running rights to an operation out of St. Thomas and, if they did, at what cost?
CN is in business for one reason and one reason only: to make gazillions of dollars.
Another consideration. The line to London currently operates with a speed restriction in the 15 miles per hour range. Not inconvenient for a tourist or dinner train service but any mention of a commuter train running between the two cities is a far-flung dream, unless somebody is willing to invest in right-of-way upgrades.

A SMALL VICTORY
While her personal saga has lasted nowhere near as long as the PSTR episode above, Pauline Wimbush is enjoying a small victory this weekend in her four-year battle to have something — anything — done about the derelict house next door at 46 Kains St.

St. Thomas fire officials stepped in this week and boarded up a derelict house at 46 Kains St. which has stood vacant and crumbling for the past four years. Neighbours have complained the demolition by neglect of the once-attractive, cottage-style house has lowered their property values. A private contractor was called in the complete the work Thursday, at the expense of the property owner whose last known address was in Holland.

Well this week, after a visit by fire prevention officers Bill Todd and Brian Leverton, the broken windows, missing brickwork and collapsing rear roof have all been boarded up. See today’s front page photo.
A private contractor was called in Thursday and completed the work . . . at the expense of the property owner, whose last known address was in Holland.
A peek in the windows — and confirmed by Pauline — indicates there has been activity in the house at some point in the recent past.
It’s a minor triumph for Pauline and her neighbours who have been given the cold shoulder by the mayor, but she won’t rest until the crumbling edifice is torn down and she has the ability to put her house back on the real estate market.

“In the next number of months we’ll begin the engineering to design the tracks . . . and get the approvals in place to make it happen.”
St. Thomas CAO Wendell Graves at Wednesday’s federal funding announcement the city will receive $167,000 to reconnect both segments of the former London & Port Stanley rail line north of Talbot St.