It’s an unenviable position to be in, but for Pauline Wimbush and her immediate neighbours on Kains St., they are unwilling participants in a circus-type juggling act.
If you recall, Wimbush lives next door to what she calls “a disaster” at 46 Kains St. An abandoned and derelict cottage-style house that has been at the mercy of the elements for the past four years with the owner having moved to Holland.
The vermin-infested house is akin to “living next to the St. Thomas zoo,” advises Wimbush.
She contacted Mayor Heather Jackson last year, however the mayor’s lack of response “showed very poor and weak leadership,” asserts Wimbush.
Speaking to the city’s chief building official Chris Peck on Friday, he outlined the process undertaken when a stalemate like Wimbush and her neighbours are facing drags on for years.
“When a complaint is filed, a property standards officer is usually dispatched to go have a look at the nature of the complaint and make a determination what the next step might be,” Peck advised.
“In the case of this property, going back in time, the owner responded to things we had sent out. More recently they have stopped doing that.” 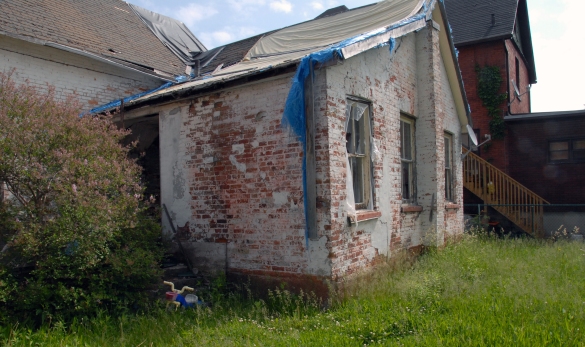 Peck confirmed an order has been registered against the property and he is left with three options.
“We can do nothing and wait it out. We can charge the owner for not complying with the order and it’s pretty difficult if we can’t find this person.
“The third option would be to get council approval to send a contractor in to do work, which is also problematic. It’s easy if it’s an unsafe building ready to fall down. We go in and knock it down.
“This house isn’t that bad. It’s got problems, granted, but it’s not immanent to fall down. But how far do you go in fixing it up? Especially when you’re using taxpayers’ money to do it.”
There is one other avenue open to the city.
“What I’m trying to do is get a new boarding bylaw. That would make it easier for us to go in and at least board up the holes in the wall and the broken windows.”
The draft bylaw is currently in the hands of the city’s legal counsel.
So, what is the short-term outlook for Wimbush and her neighbours?
“We have the order on the property and if the property were to be sold that order would go with the property,” Peck explained.
However, Peck is brutally honest in his final assessment.
“What makes Kains a kind of lower priority is it is not close to the street. Really all that it is affecting is the value of the neighbours. I don’t want to dismiss that, but it does make it a lower priority in the bigger scheme.”
Not words of encouragement and that’s where the balancing skill comes in.
“It’s always a juggling match trying to protect the interests of the city as well as the neighbours.”
A boarded-up structure is likely the best outcome in the short haul.
Not much in the way of consolation for nearby residents hoping to sell their properties.

RIDE ON
A story last week by T-J reporter Jennifer Bieman has triggered exuberant debate on both sides of the e-bike fence.
It was prompted by a recent minor accident in a parking lot involving one of the ubiquitous vehicles and a pedestrian. 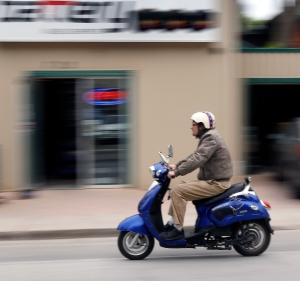 In the pro-camp Edwina Blakely writes, “Being an e-bike owner I think we all need to adapt to the change … no one likes change but it’s happened, e-bikes are here to stay …. it’s a cost-efficient way to get around the city.
Delia Queposilpoppit agrees, but with a twist. “I ride an e-bike because both walking and biking have become painful. I am on disability so I can’t afford to own a car. These e-bikes are a godsend to me.”
Meantime in the they-are-nothing-but-a-nuisance camp, Dan Leddy gets right to the point. “They need to get those things off the street.”
Michael Williams adds, “These riders need to be licensed and insured. They need to realize that they don’t belong on sidewalks and highways, where they are putting everyone in great danger.”
Seems like the latest evolution of road rage.

HOMELESS HAPPENS UPDATE
Homeless advocate Jason McComb is really pumped up about resuming his Walking in the Free World 2.5 trek across Canada.
No, he is literally pumped up. 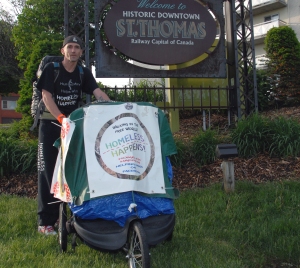 You see the three-wheel stroller that carries his backpacks and other belongings on Part 2 of his walk developed a flat tire last week and the foot pump he brought along for emergency use isn’t fully up to the task, so Jason is having to stop every half-hour or so to pump up the tire.
Imagine crossing this country in 30-minute segments.
However Jason is in good spirits, and why wouldn’t he be after spending time with his musical hero, Matchbox 20 front man Rob Thomas, Thursday night in Orillia. Thomas, by the way, is carrying a Homeless Happens T-shirt aboard his tour bus.
From Orillia, it’s on to Huntsville this weekend where Jason has been asked to tour a new men’s shelter now under construction and attend a morning church service.
He will be in Burke’s Falls early next week, where the onset of a Canadian winter stopped Jason in his tracks last year.

ONE TO WATCH
The comings and goings over the next few months following election of new members to the St. Thomas Cemetery Company board of directors.

A REMINDER
If your Monday evening television viewing includes keeping up with city council activities, remember there is no meeting this Monday due to the mayor’s China junket.
The next council meeting is June 22 and then the summer schedule kicks in with single sessions only in July and August.

“Staff frustration is extremely high . . . Staff have had to re-learn a system that does not operate as intended.”
Elizabeth Sebestyen, St. Thomas-Elgin Ontario Works acting director, in an update to Elgin county council Tuesday on a computer program rolled out by the provincial government in 2011 intended to simplify the delivery of social assistance payments.