You have to look very, very carefully to find this gem in last Monday’s council agenda.
We’ll help you out. It’s on Page 65. A warning from the city’s director of finance, David Aristone.
“The various reserve balance are adequate in the short term,” advised Aristone in his 2016 year-end update to council. “However, for the longer term, the city is financially exposed in the following areas.
Aristone lists four areas with the final being “future retirement payouts for the fire department.”
No amount is listed, but we confirmed with human resources director Graham Dart the amount at the end of 2016 was approximately $1.3 million.
A tidy sum, that. And what is the $1.3 million earmarked for?
That’s the total amount, as of the end of last year, potentially owed to retiring firefighters in lieu of sick days.
That’s right. In their collective agreement, they can bank unused sick days, up to a total of six months, and cash them out upon retirement.
We’ll repeat that amount, $1.3 million of ratepayer money.
It’s an obscene amount
It’s an obscene practice.
The only saving grace in all of this? Firefighters are the only municipal workers with this gravy train clause in their contract.
And now, they want to bargain for 24-hour shifts.
We’re still waiting to hear from the firefighters association on the benefits of 24-hour shifts and how this will improve fire safety in St. Thomas.
SHAPING THE CITY’S RETAIL FUTURE
A considerable portion of Monday’s council meeting was devoted to digesting the retail market study in the form of a presentation by authors Justine Giancola of Dillon Consulting and Scott Morgan of W. Scott Morgan & Associates. 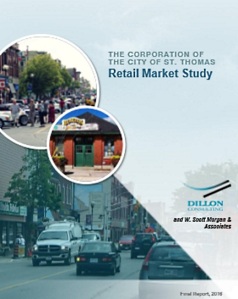 While the study red-flagged the amount of vacant retail commercial space – 313,000 square feet, a three-fold increase in the period 2000 to 2015 – it did indicate the city has reached an “equilibrium” with its “anchor” stores.
These include Wal-Mart, Canadian Tire, TSC Store, Home Hardware/Building Center, Rona, the Real Canadian Super Store, other supermarkets, three Shoppers Drug Marts, and the Galaxy Theatre, which have established a
“commercial equilibrium whereby the market is neither under-stored nor over-stored in the 2015 base year.”
Of interest, Elgin Mall has again become an important talking point in the city’s retail future after languishing for so many years.
The mall’s owners “are being very aggressive,” praised Giancola, who cautioned most of the vacant units at the Wellington Street mall are smaller in size and not attractive to larger retailers.

Brothers Jay, left, and Mory Burstein last year completed the purchase of Elgin Mall from OneREIT. Through their small, family owned real estate investment company based in Brampton, they hope to turn around the sagging fortunes of the mall that dates back to 1978.

The study encourages “revitalization” of the mall.

Not so encouraging is the prospect of attracting a major hotel/motel chain to the city.
As Mayor Heather Jackson noted, “a previous study indicated there was not enough Monday to Thursday traffic.”
Giancola suggested the city should designate areas for location of a hotel or motel and streamline the approval process but conceded St. Thomas may “be limited to boutique-type of hotels.”
Morgan was more blunt.
“The hotel picture is discouraging,” due to the proximity of London. “I don’t hold out much hope.”
An often asked question involves the amount of social services clustered in the downtown core and is this a hindrance to development.
“The key is to provide a range of services,” stressed Giancola. “There is a lot of value to having social services there. They are a key element of downtown.”
The city garnered praise for the amount of parking spots available to those shopping downtown.
Giancola called it a “constant challenge.” Do you offer front door parking or around the corner, off street.
“You could offer one side of Talbot for angle parking,” suggested Morgan, pointing to Collingwood, Ontario as as example.
“But the city is doing a pretty good job. I encourage you to have patience. In policy terms, you have done well. Stick with these policies.”
“Parking will always be interesting to sort out,” added Mayor Jackson.
Several key recommendation, if adopted, could dramatically alter the look of downtown.
These include the encouragement of residential development at the west end of Talbot Street, including townhouse development on properties fronting Curtis and Centre streets; redeveloping the existing police station for community use including “active and passive recreational uses”; and define a long-term vision for Elgin Mall.
Related post:
Market study recommends more retail in downtown core; revitalization of Elgin Mall
AN IMPORTANT GIFT
Council was unanimous last Monday in selecting Veterans Memorial Garden as the name for the proposed new war memorial to be located on Moore Street, between Talbot and Centre streets.

Members of the 31 Combat Engineer Regiment (The Elgins) stand near The Cenotaph on Talbot St. in St. Thomas during a ceremony for the National Day of Honour. The day was set aside to mark the end of Canada’s military mission in Afghanistan.

The new garden would be a consolidation of the existing monuments, including the First World War soldier standing at the entrance to St. Thomas Elgin General Hospital and the Second World War and Korean War memorial on Princess Avenue.

Coun. Mark Tinlin put forth the motion to endorse Veterans Memorial Garden over the other two suggested names: Remembrance Place and War Memorial Garden.
“A thoughtful suggestion,” offered Coun. Linda Stevenson. “A very important gift to the city.”
A volunteer committee under the guidance of chairman Herb Warren is the driving force behind the garden that will “recognize the sacrifice of so many from St. Thomas and Elgin county made during the many conflicts of the last 100 years.”
HAVE YOUR SAY
Reader Ken Gadsdon has praise for Doug Tarry Limited and agrees with Coun. Steve Wookey regarding non-powered boats on Lake Margaret.

“Thanks for the article on the ownership of Lake Margaret and associated lands transferring from Doug Tarry Ltd to the City of St Thomas,” he writes. “The Doug Tarry company has been an excellent steward of the lake and architect of the community.
“I think it would be terrific if the lake could have canoes and kayaks, without any kind of motors, allowed on it.  I agree with the no fishing rule but I have seen people fishing it regularly for the 15 years we have lived in the area. The challenge remains enforcement.  I would welcome being part of the committee tasked with keeping the lake in great condition.”
Related post:
City to assume ownership of Lake Margaret . . . and those grass-gobbling geese
A REMINDER
The city is hosting a public information session from 5 to 7 p.m. on May 9 to outline the design of the new St. Thomas Outdoor Recreational Complex to be located at 355 Burwell Road. The meeting will be held across the road in the Community Room at Valleyview Home.
Related post:
Tendering process underway for St. Thomas Outdoor Recreation Complex
It’s a recreation plan with plenty of kick to it
Questions and comments may be emailed to: City Scope