The city shone some light this week on its proposal to develop “a social services and housing campus” on a large tract of land recently purchased from London developer Shmuel Farhi.
City manager Wendell Graves updated council at Monday’s reference committee meeting on the development process at 230 Talbot Street which will be undertaken in three stages, anchored by a new home for Ontario Works which is currently leasing space in the Mickleborough building at 423 Talbot Street, the second property purchased by the city from Farhi in the same transaction.
The city paid $1.4 million for the parcel of land on the south side of Talbot St., between William and Queen streets, and extending south to Centre Street. The property includes four houses on Queen Street.
Farhi Holdings – which once pitched the property to the city as a possible new home for Elgin St. Thomas Public Health – is donating $400,000 back to the city. 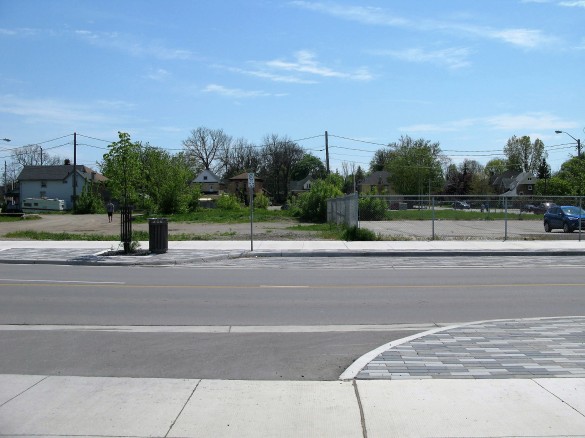 The property at 230 Talbot Street, seen from the north side of the roadway.

The initial stage of the project involves construction of a 15,000 square foot social services building that could include as many as 28 housing units on two floors, each of the upper floors being roughly 10,000 square feet in size.

A green space would be incorporated into the centre of the property with the potential for a second building to be constructed at a future date.
Site remediation is expected to cost between $400,000 and $600,000 and could begin this summer.
“Once we get a few weeks down the road, we can do that as a parallel project,” explained Graves on Wednesday. “We don’t want to do remediation and have a big hole there before we start with construction. Remediation will not take long.
Graves is confident any environmental concerns about the former railway lands can be addressed.
“We have done due diligence over and above so we know exactly what we are facing,” Graves told City Scope in March of this year. “In our approved city budget this year we have funds allocated there to begin some cleanup. Because we are looking to use pieces of that site for residential, under the Ministry of the Environment regs, that is the highest order of cleanup that will be required.”
He is hopeful construction could begin before the end of the year.
“Like we’ve done with other projects, we’re going to pull out all the stops and see how far we can move it along and, hopefully, maybe get some activity there this fall.”

No firm timetable has been established for demolition of the Queen Street houses.
“Ultimately in one of the phases they would be removed,” advised Graves. “Nothing will happen to them until we get to that phase of the development. I can’t say exactly when that is going to be.”
Monday evening, council approved the project in principle and the city will now advise the province it plans to move forward, beginning with tendering for architectural services.
Related posts:
City and London developer Shmuel Farhi reach deal on west-end properties
What’s in a name? In this case, $2.7 million
Questions and comments may be emailed to: City Scope