With COVID-19 testing centres in London overwhelmed this week as a result of the Western University outbreak and the province aiming to up the testing across the province to 50,000 per day in short order, what is the status of the assessment centre at St. Thomas Elgin General Hospital?
President and CEO Robert Biron says there has been an uptick in the number of daily tests however there is spare capacity at the centre.
Speaking with Biron this week he confirmed, “Yes, we are seeing an influx from a number of sources.

“It’s not surprising with schools back and we expect the trend to go up in the coming weeks. We continue to support the re-opening of the schools and we continue to support our long-term care facilities for their staff testing.
“And, of course, we’re supporting our patients. They have to get pre-tested before surgery. And then we have individuals who may have symptoms and are calling to verify where they are at.” 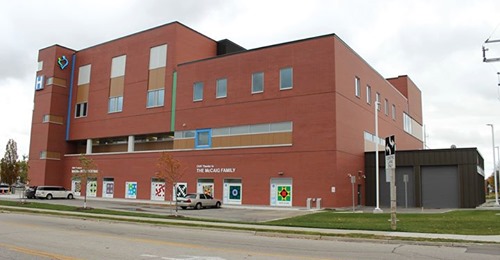 Biron says that is the case in neighbouring municipalities with testing centres, including the three in London.
That is creating a ripple effect in St. Thomas, notes Biron.
With a significant backlog at those London centres this week, does the hospital assessment centre accept appointment requests from beyond St. Thomas and Elgin?
“We always have residents from London coming for all of our services. And so that is not unusual. We have some capacity but it’s not like we have the capacity to solve their challenges in London.”

“Let’s double down on those measures and for those not adhering to them, I think it’s important they contribute and not put other members of the community at risk by behaviours that are not consistent with those measures.”

He added, “We have sufficient capacity to respond to what we believe will be an influx for the re-opening of schools and supporting our long-term care facilities in Elgin.
“We’re obviously here to support our immediate community. But if there is a crisis, all of the surrounding hospitals would be supporting each other.”
Biron echoed the sentiments of healthcare officials across the province in anticipation of a second wave of the coronavirus.
“The provincial numbers are trending up and that’s concerning to all of us.”
He offered a timely reminder to the community.
“These public measures served us well during Wave 1. Let’s double down on those measures and for those not adhering to them, I think it’s important they contribute and not put other members of the community at risk by behaviours that are not consistent with those measures.”
Staff at the hospital assessment centre are reminding with the higher volumes of appointments they are asking callers not to leave multiple phone messages as this slows down the whole process.
And, patients with no symptoms of COVID-19 can expect to be scheduled three or four days out.
As a reminder, you must schedule an appointment which you can do by calling 519-631-2030, ext. 6210.
The centre, with an entrance off Hepburn Avenue, is open seven days a week from 8 a.m. to 6 p.m.
You can find out the test results by visiting the website  https://covid19results.ehealthontario.ca:4443/agree

A VALUABLE RESOURCE FOR VICTIMS OF SEXUAL ASSAULT

Many of these assaults go unreported because the victims are hesitant to report them to family and friends, let alone the police.
Victims can now fill out a submission online which will be dealt with by a member of the St. Thomas Police Criminal Investigation Unit who will follow up accordingly.
Calvert explains the goal is to bring these cases to a resolution “by conducting a professional and thorough investigation.”
The process doesn’t end there, assures Calvert. The police service will also provide individuals with resources for ongoing support.

“Sexual assault can be committed by anyone; a stranger, a friend, a partner, a family member or a person in a position of authority.”

If you visit the police website at http://www.stps.on.ca/services/services-report_sexual_assault/, there is a considerable amount of information related to sexual assault.
Including this definition, “A sexual assault is any unwanted sexual contact. Sexual assault can happen to anyone, regardless of gender, age, and cultural background. It includes, but is not limited to, unwanted kissing, touching, penetration or attempted penetration.
“Sexual assault can be committed by anyone; a stranger, a friend, a partner, a family member or a person in a position of authority.”
Other areas covered include reporting a sexual assault years after it happens; working in the sex trade; details on a Sexual Assault Evidence Kit; and what types of evidence may be relevant in a sexual assault case.
A great takeaway on the website: Saying ‘No’ is not the only way to show you do not consent.
Take advantage of this resource now being offered by the St. Thomas Police Service.

HAVE YOUR SAY ON POLICE BODY CAMERAS

“To ensure the city has a police service accountable to those they serve,” the St. Thomas Police Service will next month undertake a pilot project to evaluate the use of body cameras.
The decision to proceed with the test was approved in June by the Police Services Board, advised chairman Dave Warden.

He noted, “The St. Thomas Police Services Board supports building public trust, community support and enhancing officer safety and public safety.”
It will be a 90-day pilot project and city residents are encouraged to participate in a quick online survey with a pre- and post-project component.
The survey is geared to city residents only and not individuals residing elsewhere whose policing services are provided by the OPP or other municipal policing bodies as is the case in Aylmer, for example.
The deadline to complete the survey is Oct. 1, which is the day the pilot project will commence.
You can find the survey at https://www.surveymonkey.com/r/RHPSSVF

We haven’t focussed on the city’s Select Committee for Animal Welfare since the beginning of this year.
Hang on a second. That’s right, city council dissolved it back in January.
Wait another second. That’s not quite right, either.
At the time Mayor Joe Preston advised, “We’re not winding down the committee. We expect it to carry on. It just won’t be a committee of council.”
One of the functions of the on-again, off-again committee is/was to press for a new or revitalized animal shelter and approximately $400,000 had been set aside for that purpose.
If you’ve never seen the facility on Burwell Road, it’s a bleak excuse for a shelter that no cat or dog should be subjected to.
Back in January, Preston opined, “If you’d like us to do more than remodel the old shelter, there would need to be some fundraising done.”
Question, Joe. How much did user groups contribute financially to the skateboard park?
And the provision of an animal shelter may very well be a mandated service for the city.
So, it is with interest that the shelter is on Monday’s (Sept. 21) council agenda.

“Over the last 5 years, there have been numerous council reports and discussions about renovating or reconstructing the animal shelter.”

In a report from Justin Lawrence, director of environmental services, he seeks council’s approval to spend $5,000 for the creation of a site plan and 3D rendering of a proposed new shelter.
Lawrence notes, “Council requested that private donations be sought to help fund this project.”
He then goes on to quite correctly add, “It is challenging to achieve funding commitments without a concept plan.”
Good point.
Lawrence also reminds, “Over the last 5 years, there have been numerous council reports and discussions about renovating or reconstructing the animal shelter.”
Quite an understatement and does it give you a sense of where on the priority list a new animal shelter sits?
In July of last year, council did approve a location on Southdale Line near the Doug Tarry Sports Complex. The cost of construction is estimated at $1.5 million.
Just before she resigned as chair of the committee, Lois Jackson – who has a wealth of experience and innovative ideas council should have paid attention to – observed, “I’m a business person who believes in making money. But Lois Jackson isn’t council and Lois Jackson doesn’t work at city hall.”
Pity.
If Preston expects the on-again/off-again animal welfare committee to contribute half that amount, that’s a significant ask.
But, there’s always that professional fundraiser in St. Thomas who did such a bang-up job rounding up dollars for the twin-pad arena.
Remember?

Regarding our item last week on surgeries cancelled at St. Thomas Elgin General Hospital due to the COVID-19 pandemic, June Harris leaves this to ponder.

“Wonder how many deaths have happened as a result of not having surgery? We’ll never know.”

And a reminder, I can be heard weekday afternoons as news anchor and reporter on 94.1 myFM in St. Thomas. As always, your comments and input are appreciated.