Planned provincial cuts and the closure of public healthcare services will lead to the Doug Ford government offloading more costs associated with these services to every municipality in the province.
That is the message Melissa Holden will deliver in a deputation to city council on Tuesday (Nov. 12).
Holden is a member of the Ontario Health Coalition in London whose mandate “is to protect and improve our public healthcare system for all.”
In addition, the organization advocates “to protect services as public and non-profit and to protect local accessible service on the principles that underlie our public healthcare system . . . principles of compassion and equity.”
Holden warns rural communities already suffering from a shortage of services will be particularly hard hit “as dispatch services and the governance of ambulance services would move further away.”

In her presentation to council Holden writes planned cuts and changes to the healthcare system are unnecessary and “will lead to new costs, will take money away from care and will put the quality and accessibility of public healthcare services at risk.”

The coalition is asking city council to pass a motion “that calls upon the Ontario government to halt the closures, mergers, and cuts to local healthcare services that our communities have spent almost a century or more building.”
Holden advises there is no evidence to support cutting public health units like Southwestern Public Health which serves Oxford, Elgin and St. Thomas.
She stresses “It is critical that these services remain local because the demographics and needs are unique.
The province initially had proposed reducing the number of public units from 35 to 10 through mergers. That plan has since been amended after “significant pushback.”
Holden warns amalgamating and cutting funds to local health units “will jeopardize vital local services including food and water safety, infectious disease tracking and prevention, immunizations, prenatal training and safety, student breakfast programs, overdose prevention, safe needle and biohazard programs and much, much more.
The proposed cuts are not limited to public health units.
The province plans to close 49 of 59 local paramedic units and a dozen of 22 local dispatch centres.

“The evidence shows irrefutably that levels of care in long-term care are insufficient to be safe, given the complexity of the care needs among Ontario’s approximately 80,000 long-term care residents.”

Holden notes centralization of these paramedic services “will mean longer travel distances, longer wait times, centralized triage and the centralization of resources over time.”
Such centralization of paramedic services, suggests Holden, “will cost likely millions in restructuring costs, taking money away from care, worsening wait times and dispatch problems and doing nothing to address the most pressing problems faced by paramedical services.”
Holden reminds council previous restructuring under the Mike Harris government cost $3.9 billion, according to the provincial auditor general.
“The evidence is indisputable that those costs were lost to healthcare and were never recouped,” notes Holden.
When it comes to long-term care, she advises next year the province will cancel a pair of special funds, one of which will impact municipally run homes.
“This cancellation will require either increases in local funding and/or adverse effects on the quality and quantity of care provided in these homes,” Holden notes.
Combined with funding for daily care in these homes set to increase by only one percent – roughly half the rate of inflation – means real-dollar cuts, according to Holden.
She continues, “The evidence shows irrefutably that levels of care in long-term care are insufficient to be safe, given the complexity of the care needs among Ontario’s approximately 80,000 long-term care residents.”
Funding for the operating budgets at local hospitals is also set below the rate of inflation, meaning real-dollar cuts.
Inevitably, advises Holden, this will mean more services and staff cuts, more centralization of services “and the problems with access to care that this causes, including longer waits and worse health outcomes.”
The coalition is planning four major stadium events across the province “to make visible the broad public support to save these services and stop the cuts and closures.”
Holden’s deputation Tuesday evening should be a call to action for Mayor Joe Preston and members of council.

THE IMPORTANCE OF BASIC NECESSITIES

The number of volunteers who have joined her effort in just one week is impressive, to say the least.
However, as Julie Weinstein knows all too well, with the onset of winter-like weather, the number of homeless individuals in the city needing shelter is also on the increase.

Weinstein estimates over 180 city residents have offered their time and resources to assist her newly formed Railway City Homeless Helping Hands group in supporting Inn Out of the Cold, based in Central United Church.
She and her daughter assemble care packages containing personal items that are distributed each evening to those attending the shelter.
What Weinstein describes as “basic necessities we don’t always think of.”
She is thrilled about a large donation of items received this week from Maxill in St. Thomas which will be put to good use.
In addition, Weinstein has received the backing of Chief Chris Herridge and the St. Thomas Police Service.
In past winters, the shelter has catered to as many as 30 overnight guests while serving dinner for anywhere from 40 to 70 individuals on a typical evening.
Early last month, St. Thomas Mayor Joe Preston and executive director Lori Fitzgerald announced the short-term shelter that has served as a ray of hope to the homeless for the past 10 years is to become a year-round shelter service.
Operating costs for Inn Out of the Cold during the six-month winter season run in the neighbourhood of $230,000 and the expectation is that will come close to doubling once year-round service is offered.
And not only is Weinstein the group’s administrator, but she also finds time to volunteer overnight at the shelter. Something she planned to do the day we caught up with her.
It’s not a new direction for Weinstein, as she volunteered for several years with Misty Lane Craig and her London group Homeless Helpers.
If you are able to donate personal items including cold weather articles like scarves, hats and gloves – but not monetary contributions at this time – visit their Facebook page at Railway City Homeless Helping Hands or email Feinstein at
jmweinstein71@gmail.com

A STEP FORWARD FOR VETS

Beginning Monday (Nov. 11) vets and active members of the Canadian Armed Forces will have free access to Ontario Parks as part of the province’s Health Parks Healthy People initiative.
Jeff Yurek, Minister of the Environment, Conservation and Parks, made the announcement yesterday (Nov. 8) at the St. Thomas branch of the Royal Canadian Legion.
The vets and active members will have free, week-day access to 340 provincial parks and 295 conservation areas in Ontario.
They also will enjoy recreational fishing across the province without having to purchase a licence.
“Providing veterans and active Canadian Armed Forces members free access to our beautiful provincial parks is a token of appreciation for the sacrifices they have made to protect the freedoms we have and the values we hold dear,” acknowledged Yurek.
In a media release, Ontario Provincial President of the Royal Canadian Legion Garry Pond called Yurek’s announcement “a step forward in helping de-stigmatize mental health in the military and this news should be well received by our veteran community.”

Reader John Waugh, who describes himself as a “relative newcomer” to the area, says in an email sent our way, he really “likes the interest in history you find here.”
And, he wonders why there has been relatively little in the way of feedback to the news two St. Thomas Anglican churches will likely merge in the near future. 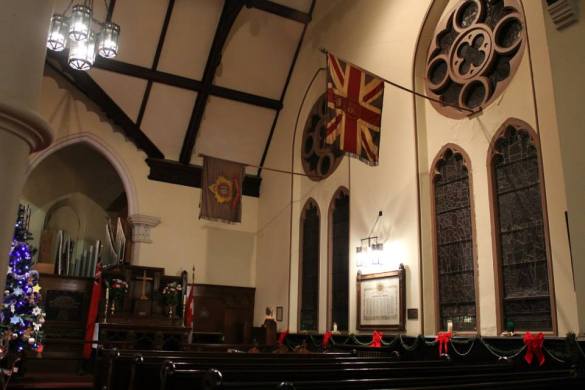 The interior of Trinity Anglican Church in St. Thomas showing the flag of the 91st Battalion.

Because of the escalating cost of maintaining Trinity Anglican Church on Southwick Street – the one with the purple spire – the proposed plan is to merge that congregation with the parishioners at St. John’s Anglican Church on Flora Street.
The merged entity would be based out of the latter location under a new name.
The Diocese of Huron has the final say on the amalgamation – endorsed by both congregations at a recent meeting – with a decision expected on Dec. 6.
While the merger is a necessary move, the critical question is what becomes of the magnificent Trinity Anglican Church which dates back to 1877, four years before St. Thomas was incorporated as a city?
Actually, the story goes back much further.
The first Church of England in the area was the pioneer church Old St. Thomas Church – on Walnut Street which opened 1824.
Rapid growth put pressure on the tiny structure and construction on what is now Trinity Anglican began in 1876 under the direction of Detroit architect George Lloyd.
Of note, the existing bell at Trinity was transported over from the Walnut Street church.
The cost of construction was an estimated $21,000.
More on the future of this gothic edifice next week.

“I’m not very optimistic that necessary changes will be made to the provincial animal welfare act. I feel the PC government will water it down and not include protection for farm animals.
“Previously, veterinary hospitals, animal shelters and other places were exempt from the OSPCA Act. The outdated “Animals for Research Act” governs pound and shelters! If you learned about the minimum standards of care they outline, you’d probably be appalled. Even those enforcing it are reportedly unhappy with the legislation.
“Yes, there needs to be proper oversight of the law, and stronger sentencing of offenders, but support for life-saving programs and services needs to be supported as part of animal shelter reform.
“Some US states have mandated an end to killing shelter animals or culling domestic species. This can be done here too because there’s growing proof that alternatives work and that it’s in the public interest.
Animal and human welfare are definitely linked. When animal abuse is discovered, there is often abuse of children or others within the home. Research also links violence against animals to other criminal and terrorist activity.
“I don’t think this is being properly investigated or taken seriously enough in Canada. In the USA, abusers can end up on the FBI watch list. They also have some federal oversight for welfare and public safety regarding wild animals in captivity that we lack here.”

You can read the Provincial Animal Welfare System posting here.

MASCO Canada Ltd. is hosting a job fair on Tuesday (Nov. 12) from 3:30 to 7:30 p.m. at Elgin Mall. Bring your resume or you can apply online at mascocanada.com/jobs