With the opening for the season at the homeless shelter serving St. Thomas and Elgin, what was once deemed “possible and probable” is set to become a reality.
A reality, mind you, that is a sad reminder of day-to-day life for the homeless and near homeless in the community.
Gathered outside Inn Out of the Cold, housed at Central United Church, St. Thomas Mayor Joe Preston announced Thursday (Oct. 3) the short-term shelter that has served as a ray of hope to the homeless for the past 10 years is to become a year-round shelter service.
This will be achieved through a two-model approach, explained executive director Lori Fitzgerald.
“Our normal model is that we open November through April. We open at 6 p.m. for a hot meal and we offer some activities and programs to move people forward and connect them to services.
“That is followed by a good night’s sleep in a warm place and a good breakfast before heading out at 8 a.m.”

In the past, the inn has catered to as many as 30 overnight guests while serving dinner for anywhere from 40 to 70 individuals on a typical evening.
Not only will the shelter re-open its doors earlier this season on Oct. 22, next spring the goal is to introduce the warm weather model. 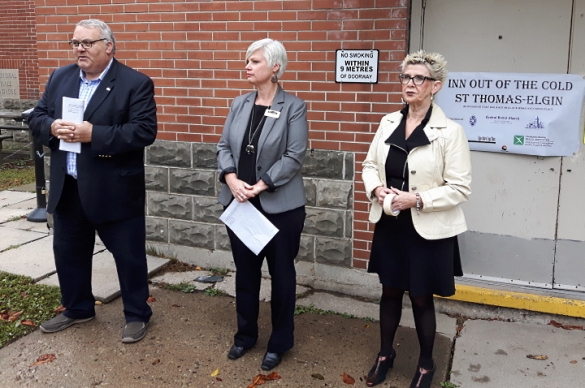 “That will be in effect from May until the end of October when we will flip back to our cold weather model,” advised Fitzgerald.
“We’re going to be opening a little bit later in the warm weather and we’re not going to have the hot meal, but we will have snacks and a bag lunch for those who come to us at nine o’clock at night who are hungry.
“They will then be able to enjoy a good night’s sleep and we will still be offering breakfast in the morning. We may not have the full range of activities, but we will still have navigation and out staff will still be able to point people in the right direction to get the services and help that they need moving forward to, hopefully, get permanent stable housing.”
Exactly one year ago, city council was in receipt of the first-ever St. Thomas and Elgin county homeless enumeration, what was referred to as “an important first step in ensuring that the goal to shift from managing homelessness to ending it gains valuable momentum and a renewed sense of urgency.”
The enumeration, mandated by the province was, in fact, an actual survey conducted with individual homeless persons.
It identified 159 homeless persons, including 33 dependent children.
In addition, 17 were individuals being sheltered by Violence Against Women Services Elgin County and who did not participate in the survey.

“. . . let’s put together a bit of a task force to try and make it so we can, at least year-long, work with the people who don’t have a place to live in our community.”

Operating costs for Inn Out of the Cold during the six-month winter season run in the neighbourhood of $230,000 and the expectation is that will come close to doubling once year-round service is offered.
Some additional funding has come from the city and the United Way, however, Fitzgerald advised, “We really, really do need community support. The support of organizations, service clubs, friends, professionals and businesses. Everyone to make this happen. We do not have the full budget costs secured yet for us to be able to continue year-round permanent.
“But we are confident we can attain that goal, but we need your help. So, we will be having fundraising activities by third parties and ourselves. And I will be working hard to meet with people to try to increase our donor base.”
The shelter at this time relies on a variety of service groups and a pool of 132 volunteers “to help the most vulnerable citizens of St. Thomas and Elgin.”
Reflecting back to the bitterly cold April day the shelter closed for the season, Preston said he couldn’t help but wonder “If our community wasn’t good enough to protect its own homeless.
“I said then and there, let’s put together a bit of a task force to try and make it so we can, at least year-long, work with the people who don’t have a place to live in our community.”
And not just through the provision of warm shelter and food, “but to give them a path toward housing. And, we have spent the last couple of months, collectively as a group, talking about how that was possible and probable. And today, announcing that is happening.”

Following on the heels of a documented encounter this spring in violation of the city’s code of conduct, a review has been undertaken by staff on the corporate policy dealing with harassment, discrimination, violence prevention
and resolution.
The incident in question involved a signed complaint from a city employee alleging a member of council of the opposite sex “removed a cell phone from a hip pocket, brushed their body against the complainant’s back and casually touched a forearm and elbow multiple times, making the employee feel very uncomfortable.”
A corporate policy report from Carrie Leach, safety and disability manager is before council Monday (Oct. 7) for approval by members.
The review and implementation of changes are in accordance with the province’s Occupational Health & Safety Act.

. . . workplace harassment which can involve “unwelcome words or actions that are known or should be known to be offensive, embarrassing, humiliating or demeaning to a worker or group of workers, in a workplace.”

One notable revision requires complaints against the city manager, directors and department heads are to be acted upon by an external investigator.
In the past 15 years, the workplace environment at city hall has been described as “toxic” and “poisonous.”
Four years ago, this corner was in receipt of a couple of phone calls from a city employee we referred to as “Dave” who was completely frustrated with the investigative process laid out for staff dealing with what they feel are harassing situations.
In one of those conversations, “Dave” explained, “We’re told there is zero-tolerance against bullying, harassment and violence. Well, I’ve been with the city for 25 years and I’ve yet to see anything happen to people who are doing this.”
The nature of the harassment, he advised, involved fellow employees and managers and was both verbal and physical.
In 2013, then city treasurer Bill Day was accused of harassing, bullying and belittling a long-term employee to the point she went on stress leave for an extended period of time.
A third-party investigation at the time identified serious issues with the recommendation a course of action be taken to encourage a healthy workplace for every staffer in every department.
And perhaps the most serious incident dates back to 2003 when this reporter unearthed allegations of sexual harassment against a city employee who was ultimately identified as then treasurer Ron Cutway.
Once identified, several other women collaborated the allegations.
Highlighted items in Leach’s report include the following definition of workplace harassment which can involve “unwelcome words or actions that are known or should be known to be offensive, embarrassing, humiliating or demeaning to a worker or group of workers, in a workplace.
“It can also include behaviour that intimidates, isolates or even discriminates against the targeted individual(s).”
This can include remarks, jokes, innuendos, offensive photos and intimidating phone calls.

“This includes making everyone in our organization aware of what behaviour is and is not appropriate, assessing the risk of workplace violence, investigating complaints and imposing suitable corrective measures.”

Workplace sexual harassment “can involve unwelcome words or actions associated with sex, sexual orientation or gender that are known or should be known to be offensive, embarrassing, humiliating or demeaning to a worker or group of workers, in a workplace. It can also include behaviour that intimidates or isolates individual(s).”
Such harassment can involve leering or inappropriate staring, invading personal space, unnecessary physical contact, demanding hugs or sexual favours and threatening to penalize or otherwise punish a worker if they refuse a sexual advance.
Leach notes in her report, “A reasonable action taken by an employer or supervisor relating to the management and direction of workers or the workplace,” is not considered harassment.
Likewise, “Differences of opinion or minor disagreements between co-workers would also not generally be considered workplace harassment.”
As a result of the policy review, the city “will do its part by not tolerating or condoning discrimination, harassment or violence in the workplace. This includes making everyone in our organization aware of what behaviour is and is not appropriate, assessing the risk of workplace violence, investigating complaints and imposing suitable corrective measures.”
With the hope this will entail more than just a round of sensitivity training.

Although it will not begin until early in the new year, council is being asked to approve a pilot project that will see free access to feminine hygiene products at three city facilities.
In his report to council Gary Drouin, supervisor of recreational facilities, points out “Many women know first-hand access to menstrual hygiene products is as necessary as access to toilet paper. Like toilet paper, soap and water, menstrual hygiene products are not optional, they are a necessity, not a luxury.”
With this in mind, city staff are proposing a one-year pilot project that will see the installation of dispensers in the comfort station at Pinafore Park, Memorial Arena and the Joe Thornton Centre to give women and girls access to free feminine hygiene products.
The request for approval is based on a resolution adopted by the council in St. Catharines regarding free menstrual products at city facilities.
In part, the motion noted “The inability to afford menstrual products is a health equity issue and there is a need for low- or no-cost menstrual products.”
London and Sarnia have already undertaken similar pilot projects or are assessing the feasibillity of free access programs.
Cost of the dispensers would be approximately $2,300 and, if approved, would be included in the city’s 2020 operating budget.
Drouin notes, “After one year, staff will evaluate the pilot project including qualitative and consumption data with the results informing the feasibility of expanding the provision of free feminine hygiene products in other municipal buildings.”

We are hearing rumblings about the aggressive manner in which Entegrus – formerly St. Thomas Energy/Ascent – is dealing with payment arrangements, specifically as it may relate to low income individuals and families. We assume this is in relation to overdue accounts. If you have first-hand experience with this or know of someone who has been impacted by the utility’s policy, please get in touch with us.

“My wife and I walk our new puppy every day and often go to Pinafore Park, walking around Lake Margaret, as well as to Waterworks Park. I agree that there are few geese left at Lake Margaret but there are plenty at Pinafore and Waterworks. The rumours of their demise are VERY premature!!”