City council returns to its regular meeting schedule as of Tuesday and that includes the reference committee sessions which begin once the 6 p.m. meeting concludes.
Of interest on the reference committee agenda is an update on the city’s strategic plan which was originally adopted by city council in May of 2013.
The city engaged the services of Fanshawe Corporate Training Solutions in June of last year to assist in the plan update.
The idea is to develop a short list of strategic themes for the city’s path forward.

This included a focus group of community stakeholders, a public and city staff survey which included 539 respondents and produced a long list of 25 key themes.
In June of this year that was whittled down to the Top 10 strategic priorities which will be presented to council Tuesday.
It’s a fascinating compilation of city priorities. 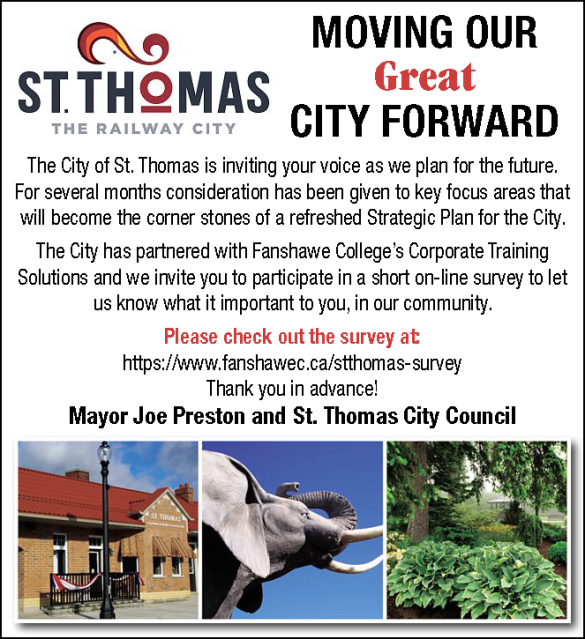 Topping the list is infrastructure, including roads, bridges and sewers.
The Number 2 priority may be a surprise to many: emergency shelters for the homeless.
And, rounding out the Top 3 is affordable housing.
In order after that, the priorities are events (culture and arts); the downtown (revitalization and security); economic development; elder care; development and promotion of industrial parks; community health; and trails.
Additional themes noted by respondents that didn’t make the Top 10 list include, in order, the following: the city’s animal shelter; climate change and the environment; a community/aquatic centre; education and skills training; transit; and youth-oriented programs.
The animal shelter topping this supplementary list is of note as various city councils have dithered over this for years.
Once council adopts the report on strategic priorities, the next step will be the formation of committees and working groups to develop, recommend and implement action items related to the priorities.
Of interest in the report are the items on the long list that didn’t survive the cut to the short list including attracting a casino to the city; bylaw enforcement; and partnering with other municipalities.
Breaking the data down further, 66 city employees completed the survey and the Top 3 priorities in order were downtown revitalization, elder care and trails.
A total of 473 respondents completed the public survey and the Top 3 generated from that were: the downtown, infrastructure and affordable housing.
The raw data from these respondents proves an interesting barometer of where people feel the city should focus in the coming years.
How about making all of Wellington, Fairview and Burwell four lanes?
Do you like roundabouts? A lot of people want to see more of them.
An action item for decades, not years, is the need to deal with the Barwick Street bridge.
On the housing side, residents want an increased supply of market rental apartments and there is a need to encourage developers to build affordable units.
People would like to see more city-sponsored concerts each year with an outdoor venue for large-scale events.
And, there is a call for more training for police regarding homelessness and addiction.
Once you sift through the data, the action plan recommendations are quite intriguing.
Things like expanding the new CCTV camera system and foot patrols in the downtown core. Of note because we had the opportunity yesterday (Friday) to speak with the downtown beat officer.
Other downtown items include more residential units and more murals and a new downtown park (on the railway lands).
On the social side, there is a call for more affordable housing with unique approaches such as using spaces above existing buildings and the introduction of tiny houses.
Hand-in-hand with the above is the need for a permanent homeless shelter.
Under environmental, there is a desire to expand the existing trail system and include the planting of more trees.
There is a push to build a multi-use community/fitness/aquatic centre through a partnership.
There is also a need to expand existing eldercare services through the addition of more beds and increasing staff at Valleyview Home.
Back to the animal shelter, it was noted a new facility “should be considered as a potential priority for the next strategic plan given the responses from all participants.”
The report is well worth reading and digesting. It can be found on the city hall web page under the Sept. 8 reference committee agenda.

At Tuesday’s meeting, council will be asked to sign a transit service contract with Voyago, the existing operator previously known as Voyageur Transportation.
The contract covers five years with the provision for a three-year and then a two-year extension ultimately expiring in January 2031.
Voyageur has been the operator for the past nine years, with the existing contract expiring at the end of the year.

Voyago will thus operate the new seven days per week transit service once all of the pieces of the infrastructure and technology puzzle are in place.
That will mean Sunday service, 20-minute service on Talbot Street and extended hours of operation using Demand Responsive Transit.
According to the report from Matthew Vriens, manager of roads and transportation, “The current gross cost of providing transit will be $1.66M after the new service level is implemented, the new gross cost will be $1.56M.
“The annual budget is dependent on operating costs and whether or not council decides to add further enhancements to the level of service.”

When we talked with MP Karen Vecchio following Erin O’Toole’s triumph over Peter McKay to take the leadership reins of the Conservative party, she couldn’t have been more ecstatic.
“The one thing he will bring is caucus unity,” she noted.

The other encouraging factor, added Vecchio, “For me, I know I can bring the concerns from my riding. It is so easy to communicate with him.”
Little could she have dreamt less than two weeks later O’Toole would appoint her Deputy Houser Leader of the Official Opposition.
A move she said left her energized “to continue my work ensuring that this Minority Liberal government is held to account.”
It’s a dizzying climb up the Ottawa bureaucratic ladder for Vecchio who served as parliamentary secretary to former MP Joe Preston for about 11 years.
Preston, if you remember, was chairman of the Standing Committee on Procedure & House Affairs.
Something not lost on Vecchio.
“I have the encyclopedia of procedures and practices right beside me in Joe Preston,” chuckled Vecchio. “I am so fortunate.”

We solicited Preston for his reaction and you can read that below.
Still on a high when we touched bases with her, Vecchio conceded this will considerably impact her life.
“My life changes every day. Every day there is a new challenge. I definitely will have to be here (in Ottawa) every day, Monday through Friday.
“But, I think it will give me a great sense of what is going on in every single portfolio. What’s going on in finance, what’s going on in public safety.
“Right down to how are we moving forward to what is our approach.”
Something she offers is “exceptionally exciting.”
As thrilled as former boss Joe Preston is, how exciting is this for Karen’s husband, Mike?
She is always quick to credit the cheerleader role Mike has been in her political career, and Karen says she is more than willing to make him “the house leader in our house. I’ll be the deputy.”
She’s quick to point out, “He is a better cook.”

HE TAUGHT HER EVERYTHING IN FIVE OR SIX MINUTES

To put it mildly, Mayor Joe Preston says “I am quite pleased” with the news of Vecchio’s appointment.
“It’s quite an honour to be asked to be part of the House management team so for her to take the role . . . is, first of all, an honour, but second of all, recognition of her skills at getting along with people. 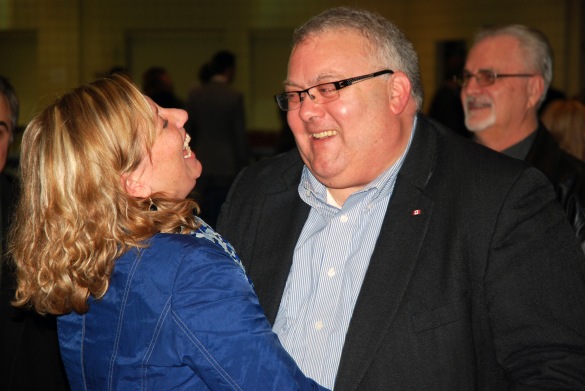 “In a minority government, it takes a great skill but mostly, it takes being nice. And that’s what will work best and Karen has that in spades. It will really suit her well in that position.”
Joe adds that was the philosophy of both of them when he sat as MP for Elgin-Middlesex-London.
“My time in Parliament was not making enemies but making friends. And she has spent her term and a bit doing the same thing.
“Being good to the people you work with is not a bad thing. At the end of the day, it lets you accomplish projects you otherwise might not.”
As to her work with Joe in Ottawa and the constituency office, Joe praises, “She was the greatest sounding board a Member of Parliament could have.”
As for advice Preston observes, “Sometimes there are some tough negotiations to do, so you can still be firm but kind. She knows how to do that very, very well.”

“But she may have learned that more from Sparta than from Joe Preston. The rural roots that she comes from and the good stock from her mom and dad.”

And don’t forget, adds Preston, “She’s already shown she can reach out further than me. She’s already chaired the Standing Committee on the Status of Women (a role she has held since 2017) and this is a nice inside Parliament touch where she will learn a lot.
“It will be a positive influence on the new party leader having Karen in that role.”
Cutting to the chase, does Joe feel he proved to be a good mentor?
“She was listening, even when I wasn’t pointing it out to her. She was seeing what was going on. She has been as skilled a Member of Parliament as you would like.
“But she may have learned that more from Sparta than from Joe Preston. The rural roots that she comes from and the good stock from her mom and dad.
“She got those skills long before she got to learn how to apply them in Parliament. I love to tell people I took five or six minutes and taught her everything I knew. And then she applied all the skills with that bit of knowledge.”

One thought on “Strategic priorities map the way forward for St. Thomas”