The city’s much-maligned transit system may very well become a greatly relied upon people mover if council endorses the recommendations of the soon-to-be-released Strategic Transit Plan.
The proposed changes would involve route and schedule adjustments, the introduction of demand-responsive transit (DRT), the possibility of larger buses and electric bus technology and a pilot project to explore regional bus service.
At Monday’s (Nov. 18) reference committee meeting, Brian Putre of Stantec Consulting and city engineer Justin Lawrence presented an overview of recommendations to members of city council.
The plan, which is 95 per cent complete, drew favourable comments from all of council, including the stark observation from Coun. Joan Rymal that “any change is better than what we have now.”

The recommendations are categorized into five streams: fleet, technology, fares, marketing and service planning/operations.
Improvements to the latter will have the greatest impact on riders. 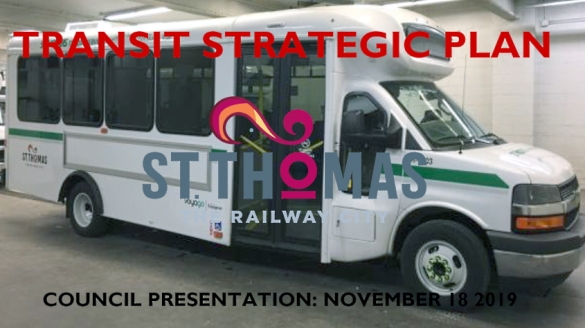 The preferred model will see four fixed conventional routes plus three paratransit/DRT routes comingling.
Demand-responsive transit traditionally utilizes buses and other vehicles operating not on fixed routes or timetables but running based on customer demand.
The conventional routes would be adjusted to eliminate one-way loops in order to operate on an out-and-back system.
The highest ridership currently is along the Talbot corridor and the aim is to run that on a 15-minute headway using two buses.
Service on the conventional routes would still operate Monday through Friday from 7:15 a.m. to 6:30 p.m.
Evening service would be provided through to 9:30 p.m. with a combined paratransit/DRT operation.
Conventional service on Saturday would operate from 9:15 a.m. to 6:30 p.m. Again, evening service would be extended to 9:30 p.m. as per weekday service.
And, Sunday service would be introduced from 9:15 a.m. until 2:30 p.m. using the comingled paratransit/DRT operation.

Adjustments to the route structure were also required to shorten them in order to maintain on-time performance.
The number of buses in the fleet would remain the same, however, it is recommended the city explore large vehicles up to 30 feet in length along with electric technology, provided upper-tier government funding is available.
All of this could be achieved by maintaining the existing fare structure and continuing with the social services subsidy program for low-income residents and those seeking employment.
There could also be the opportunity to partner with Fanshawe College for student passes and city businesses for employee passes.
Extending service outside the city to London, Aylmer and Shedden, beginning with a one-year pilot project using a single vehicle is also a recommendation of the planning study.
However, it was determined any connectivity with Central Elgin was not deemed feasible at this time.
The introduction of route and scheduling changes will likely go into effect early next year with Lawrence proposing a free service during the first month of implementation.
Responding to the presentation, Coun. Mark Tinlin stressed electric buses should be a priority and Coun. Lori Baldwin-Sands called for a six-month review.
“I want to hear from users,” she stressed.
Coun. Steve Peters suggested Saturday service should be extended even later and wondered if the DRT service would be in competition with the service provided by taxi companies.
Closing out the meeting, Mayor Joe Preston observed, “I would love to extend the hours further.
“We are accomplishing both things asked for during the (2018 municipal) election: seven-day service and longer hours.”

THE GREAT MOVE ON TALBOT STREET

Phase 1 of the social services and housing campus at 230 Talbot Street in the city’s west end is nearing completion and at this week’s meeting, the tenant selection process for new affordable housing on the site outlined for members of council.
The city’s social services department will move into their new home during the first weekend of December with the current location at 423 Talbot Street in the Mickleborough Building closing at noon Dec. 6.
A total of 28 apartment units – with the main entrance at 5 William Street – will be located on two floors above the offices.

Of those units, eight one-bedroom apartments have received funding through the federal/provincial Investment in Affordable Housing (IAH) program. As such, rents can be no higher than 80 per cent of the average market rent for the area.
According to 2018 Canada Mortgage and Housing Corporation figures, the average rent for one-bedroom units in St. Thomas was $694. Based on that, the rent for these eight units is pegged at $555, which includes utilities.
For these apartments – two of which are barrier-free – household income cannot exceed five times the monthly rent, therefore the maximum annual household income threshold is $33,300.
According to social services director Elizabeth Sebestyen, staff have assessed over 40 applications from current city-owned housing tenants and the general public. Final decisions on tenants have not yet been made.
There will be 14 one-bedroom units that will replace a similar number of city-owned three-bedroom homes on Dunkirk Drive and Simcoe Street, sold to finance construction of the new building.
The units must be offered as rent-geared-to-income (RGI) units. RGI rent is calculated in accordance with regulations in the Housing Services Act.
The majority of these units will be filled by priority-transferred tenants such as victims of domestic violence, tenants with medical or accessibility needs.
Two are barrier-free and one unit is reserved for the building superintendent.
The remaining six units are to be rented at the CMHC average market rent for St. Thomas. The rent for the four, two-bedroom units is $1,006 while the two, one-bedroom units will rent for $694. All utilities included.
Rental applications are now being accepted for these six units, with a deadline of 4:30 p.m. on Friday, Nov. 29. For more information, visit the city’s housing and homelessness page.
Application forms are available here.
Applicants who meet the normal landlord reference checks and other tenant assessment procedures will be placed into a lottery draw to select the six market tenants.
It is expected all of the William Street units will be occupied by the end of January.

PROPANE A PAWN IN RAIL STRIKE?

If you think the CN Rail strike will have little impact on St. Thomas and Elgin county, think again.
The walkout is already having a serious impact on the region, according to local farmers and the Ontario Federations of Agriculture.
The supply of much-needed propane to certain agricultural customers could be cut off within days was the warning issued yesterday (Nov. 22) at a hastily called media conference held at the Dowler-Karn rail terminal in St. Thomas.

Area farmers rely on propane for grain drying, heating livestock barns and to process commodities. If natural gas lines are not nearby, many rural residences turn to propane for heating.
“We are asking the Trudeau Government to reconvene Parliament immediately to address this issue,” urged Elgin-Middlesex-London MP, Karen Vecchio.
She added, “The strike threatens key sectors of our local economy. Agricultural producers are feeling a direct threat to their livelihood, and manufacturing and critical infrastructure needs are facing significant challenges the longer the strike goes on.”
The situation has become so critical after just four days of strike action at CN, that Dan Kelly of Dowler-Karn in St. Thomas – who is also chairman of the Canadian Propane Association – advised, as of Monday, propane will not be made available to customers who rely on it for crop drying.
His firm receives virtually all of its propane supply via rail.
Kelly noted in a media release following yesterday’s event, “there are regions of our country where clean-burning propane is the primary energy source for critical infrastructure such as hospitals, nursing homes, emergency services and
daycare facilities.”
He continued, “While a collectively bargained agreement is preferable, we are calling on the federal government to intervene.”
While talks between both sides continue, the union representing the 3,200 CN employees said yesterday there has been “no substantive progress.”
According to a CBC story yesterday, word of propane shortages has been “fabricated” through political statements and media reports.
Lyndon Isaak, president of the Teamsters Canada Rail Conference, noted in that CBC item there are still hundreds of employees on the job operating trains, and what those trains carry is a decision made by CN.
You can read that full story

A TOUCH OF CLASS

The 2019 edition of the Warden’s Banquet, honouring outgoing County of Elgin Warden Duncan McPhail, will stand as a remembrance to the past year – a year brimming with a spirit of cooperation between elected officials from across the county and the City of St. Thomas.

Duncan McPhail, left, is congratulated by outgoing warden David Marr in December of 2018.

Why, for the first time in many, many years a mayor of London – Ed Holder – was also on hand to pay tribute to Warden McPhail.
Even though the warden graciously down-played the well-earned accolades from three levels of government, including MP Karen Vecchio and MPP Jeff Yurek.
“I’m just the chairman of the board,” offered McPhail.
Most fitting, the banquet was hosted in Anderson Hall at the CASO station in St. Thomas where, as Steve Peters so appropriately noted during his presentation on the history of the edifice opened in 1872, “if only the walls could talk.”
And what stories could be recounted by the many past wardens in attendance, including Rien VanBrenk, John R. Wilson, Bill Walters, Cameron McWilliam and others.
Thank you, Warden McPhail, for a very special evening and the kind words will never be forgotten.

Another in a series of climate strikes is to be held this coming Friday (Nov. 29) in St. Thomas. Participants are encouraged to meet up at noon at the CASO station for a march to city hall “to show St. Thomas city council that declaring a climate emergency is the first step in responding to a global climate crisis,” according to a Facebook invite.