Hit taxpayers in the pocket or scour the corridors of city hall for cost-cutting opportunities.

That’s the options facing council and staff in the finals days before the 2010 operational budget comes under scrutiny a week from Monday.

Mayor Cliff Barwick has made numerous references to tough decisions that have to be made this year and in to 2011, so we went right to the source this week for a status report on the financial health of St. Thomas and the implications for residents.

“I think you’re in a situation where the taxpayer is going to be hit to some degree, but at the same time, we have taken a substantial number of items out of the budget,” Barwick told City Scope on Thursday.

“We did start with a very large figure and we’ve whittled that down and we’re on the verge now where we really are looking at services. And, the question is now, do people want their services cut or reduced, or do they want to pay a higher tax rate, we’re on that borderline right now.

Barwick admitted he’s never been in a situation during his political tenure in St. Thomas where he has had to look at that option.

So, which road are we going down.

“It’s a tough decision,” Barwick conceded, “and I think you’ll see when the budget comes on the floor of the chamber, the members of council are going to be in the position on some of the items where if they want to increase the money that has been afforded to whatever department it is, they’re going to have to increase the tax more than what is suggested in the budget in order to pay for that, or they’re going to have to find a service cut somewhere.

“If your back is to the wall,” Barwick continued, “then what do you include and what don’t you include and everybody will have an opinion, so where everything will come out in the wash, you don’t know. Once it’s on the floor of the chamber, then it’s council’s budget to do as they please.

We’re on this dance floor as the result of several mitigating factors, Barwick noted.

“We’ve been hit with lower assessment, we’ve been hit with substantial increases in the Ontario Works budget, your basic transfer payment has been reduced and then the province hits us with a $200,000 increase on taking the temperature of roads (reference to new winter roads maintenance standards). It’s absolute insanity.”

Barwick agrees the greatest debate may evolve from grant requests and “pet projects” put forth by members of council.

“What’s going to be interesting is the pet projects aldermen would like to see. When they see what has come forward under grants, that may be the most interesting part of the budget.”

And if that’s not enough to put a damper on the first weekend of spring, Barwick chips in this parting thought.

“And don’t forget we’ve got to start charging 8% starting July 1, and that cost will be passed right on to the ratepayers.”

That’s a reference to the Hated Sales Tax being foisted on us. 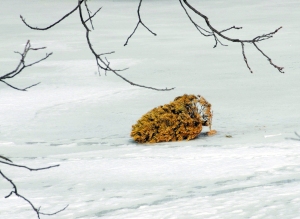 Last month we wrote about the city hijacking its Christmas tree recycling program through poor promotion and a manager attempting to discourage a Times-Journal staffer photographing the tree disposal process in action.

Thanks to the early arrival of spring-like weather which began melting all evidence of winter, those discarded trees are starting to sprout up around the city like weeds, like the one photographed earlier this month atop the ice on Pinafore pond.

You know, it would have been so much easier to be proactive in this recycling effort.

PIZZA FOR PASSENGERS
The folks pushing for revival of commuter rail service between here and London are hosting a fundraiser May 11 at Boston Pizza, with proceeds earmarked for a feasibility study.

“Do you really need to know when people are in the toilet?”

City Scope appears every Saturday in the Times-Journal. Questions and comments may be e-mailed to: mccallum@stthomastimesjournal.com.

One thought on “Some choice … cut services or hike municipal taxes”