The city lost a good one with the death Wednesday of Maurice Beaudry. The consummate community booster, Maurice loved to tell it like it is.
That was never more evident than his shoot-from-the-hip message for Daimler AG, the parent company preparing to close the Sterling Truck Plant up on South Edgeware in November, 2008.
In a conversation that month in City Scope, Maurice conveyed the following to the German multinational: you screwed up and why should St. Thomas ratepayers suffer?
And Maurice knew of what he spoke, because in his former position as manager of the Economic Development Corporation in the early 1990s, he played a leading role in convincing Freightliner to locate in St. Thomas.

Here’s an excerpt from that 2008 interview with Maurice on what transpired.
“They considered the city the best site. It had to be located along the Hwy. 401 corridor between Cornwall and Windsor. There had to be complete secrecy, I 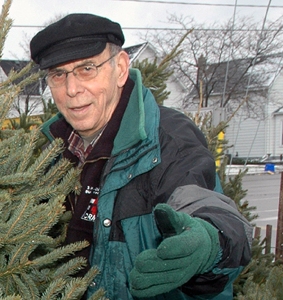 couldn’t talk to anybody. I worked a whole year to get it in to town and there were no incentives. The last two or three months were hectic.”
A scant 16 years later, Daimler AG eliminated the Sterling brand and closed the plant in 2009, throwing approximately 1,400 people out of work.
So, what went so drastically wrong is the obvious question City Scope put to Maurice.
“They changed their brand,” he shoots back. “They went to Sterling. Why didn’t they test it in the U.S. instead of here?”
The Freightliner name was a trusted brand for a convoy of truckers in Canada, Maurice stresses.
“Freightliner had 25% of the market and at the time, truckers were asking for Canadian-made Freightliner trucks. They like them better than ones made in the U.S. When I used to drive to Toronto I would have a notepad and I would check the trucks on the highway and it was always right around 25%. Freightliner was the name.”
They can be built cheaper in Mexico, but what about the quality, he questions.
“Therm-O-Disc is an example. At one time they were shipping some of their business to Mexico, but the reject rate when the product got to the final destination was just awful. That’s one reason they came back here to St. Thomas.”
Maurice says he has a couple of questions for management and labour that are sure to have both sides looking in the rear view mirror.
“What will it take to re-open the plant as Freightliner, not as Sterling? And what about de-certification? I’m sure there are employees who would say, ‘to hell with the union.’ I think there are employees who would go for that in a heartbeat.”
Maurice may be enjoying retirement, however he’s not one to retire from standing up for what is due the residents of St. Thomas.
“They owe us. They made a mistake by going to a new product line when you had 25% of the market. Why would you go to a new line? You made the mistake, why should we suffer. Why should the people of St. Thomas suffer, the taxpayers as well as the employees?
And I’d like to get that message all the way to Germany.”
Obviously the message had zero impact if it even reached Germany, nonetheless, we owe you big time, Maurice.

DID YOU CATCH IT?
Ald. Cliff Barwick launched a precision missile strike Monday aimed directly at Ald. Mark Cosens.
It was subtle and likely undetected by many.
The verbal thrust was prompted by debate on the merits of issuing downtown chip wagon licences.
Cosens stood up to declare there should be no limits on the number of permits issued.
Barwick followed with the observation this “was a contradiction from the DDB (Downtown Development Board) presently and in the past.”
A reference to Cosens’ term as DDB president several years ago when the board was opposed to these licences.
Reading a little deeper, Barwick and Cosens had a lively spat festering at that time over demolition of the Sutherland Press building.
Five years ago this month Cosens, as head of the DDB, proclaimed he had lost the confidence of the mayor’s office. The mayor at that time being Barwick.
Cosens made the comment after city council accepted the resignation of seven members of the DDB board and the appointment of three new representatives. Barwick was the lone dissenting vote. He was pushing for election of a new board of directors and that election take place by members of the DDB.
Cosens noted the back-and-forth all began over comments he made in June of 2008 questioning whether the city should have closed down part of Talbot Street due to safety concerns over the Sutherland Press building.
Those comments prompted a letter from Barwick in July threatening to review and possibly evict the DDB from its office at city hall. Subsequently, in early August, a motion was put forward at a DDB meeting to have the three-person executive, including Cosens, dissolved. When that failed to find a two-thirds majority, four board members tendered their resignations.
A dandy dust-up that provided a summer worth of entertaining reading.

DRESSED FOR SUCCESS
This corner acknowledges the manner in which Ald. Tom Johnston presented himself at Monday’s council meeting. Dressed in a fashion that conveyed an air of professionalism befitting a city representative – a far cry from his overly casual and commercial appearance at two summer meetings.
Noted and applauded.

QUOTE OF THE WEEK
“This community has lost so much in the last few years, including the Elgins.”
Ald. Gord Campbell acknowledged Monday the importance of city council supporting the return of the St. Thomas Elgins to the Senior Intercounty Baseball League in time for the 2014 season.

One thought on “The time Maurice told Daimler, you screwed up!”