It has served the city well over its 33-year lifespan however the knackered Dalewood bridge is well past retirement.

The Ministry of Transportation supplied the single-lane Bailey bridge in 1983 as a temporary measure and the structure has major issues relating to the abutments and embankments.

A report coming to city council Tuesday outlines the preferred replacement solution: a structure consisting of two vehicle lanes and a sidewalk on the east side. So no more pausing at either end to let opposing traffic proceed.

While no final design is being put forth at this time, the report from David Jackson, manager of capital works, paints an imaginative picture of possible options.

“Bridges remain visible pieces of the community for over 100 years,” writes Jackson. “With some creative design and cost-effective engineering, they can become icons that contribute towards community identity.

“There are many examples of iconic bridges that define communities in large cities but also smaller examples like the stone bridge in Stratford, Blackfriars in London, or the Humber pedestrian bridge in Toronto.

“Construction of a bridge is a once in 100-year opportunity to create something inspiring.”

Jackson recommends either a slab on girder bridge (similar to the structure on Sunset Drive over Kettle Creek) or tied arch (Blackfriars in London).

Should council give staff the go-ahead Tuesday, a capital budget request for detailed design will be brought forward in the 2017 budget with construction anticipated for 2018.

More info can be found at http://bit.ly/2dZWJkF.

A permanent solution to a temporary fix

We’re not convinced the city has the parking situation around the Elgin County Courthouse to the point where neighbours can breathe easy but, in any case, city council will also focus its attention Tuesday on the creation of a courthouse neighbourhood.

Director of Environmental Services, Justin Lawrence, is proposing development of the courthouse area as a unique neighbourhood. 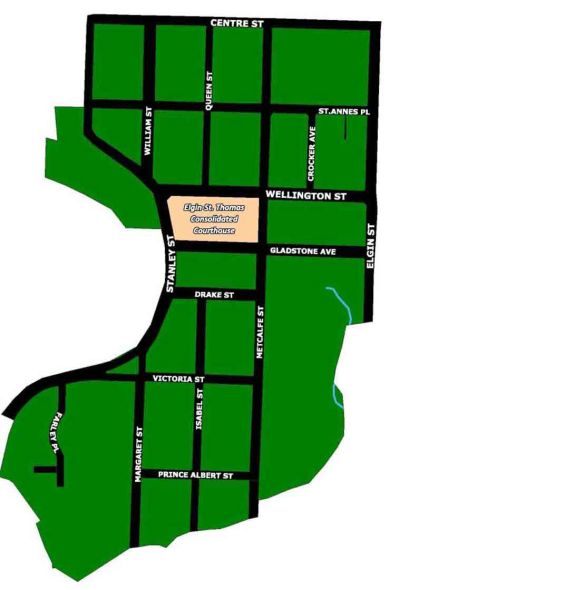 Lawrence postulates, “The establishment and enhancement of neighbourhoods around a central and identifiable theme can improve community pride and recognition. This, in turn, can improve interest in the area from a real estate perspective and potentially tourism.

“Neighbourhood enhancements are a tool in the upcoming draft Complete Streets Manual this fall.”

The courthouse area would be a significant pilot project, Lawrence indicates, because of its history, well-balanced streetscape, an abundance of heritage trees and reasonably defined boundaries.

So, what could such a neighbourhood include?

Stylized street signs, creation of a promenade along the west side of Stanley Street and development of a walking tour app are all ideas that could be incorporated into the courthouse neighbourhood.

Should council buy into the concept, Lawrence suggests a good first step would be public and stakeholder meetings with a report back to council in the near future.

Development of the neighbourhood concept could piggyback in with plans next year to reconstruct Stanley Street, from Sunset Drive to Wellington Street and Queen Street, between Wellington and Centre Streets.

If embraced by area residents, Lawrence suggests the neighbourhood concept could be evaluated elsewhere in the city.

While it would appear there is little in the way of activity on the grounds at Alma College, a quick chat with owner Gino Reale this week reveals progress is being made behind the scenes.

This includes moving forward with an environmental assessment and discussions with interested parties on possible development on the 4.45 hectare (11 acre) Moore Street property.

“There’s been a lot going on in the background,” Reale assured. “I really anticipate this thing getting off the ground this coming spring and we’re onside. There are a lot of good things happening.”

He added a more complete update could be made available to us by the end of the month.

Who is in the driver’s seat for St. Thomas Energy merger plan?

A letter to St. Thomas residents from the Zubick family

A decade ago, Elgin Scout leaders fought the good fight to keep Camp Timken – located near Iona – operating after Scouts Canada had dismissed the venue as “a property that had very little of special significance.”

John Mifkovic, leader of the 74th Scout Pack, London, Ont., rides on a zip line at Camp Timken as part of activities at the 2010 spring event.

The 26.3 hectare (65 acre) campground was purchased in 1975 by Elgin District Boy Scouts and in 2004 was placed on a disposal list by the national organization.

Well, the picturesque camp has again fallen on hard times and it would appear it is destined for the sales block.

A Scouts Canada official this week confirmed to City Scope “there remains little to no demand for the camp.” He added, “A number of options are being evaluated for the camp at this time, one of which is disposition.”