Spurred by a don’t-talk-to-me-about-my-workload retort from Mayor Heather Jackson, council Monday ditched any effort to formally establish a deputy mayor position at city hall.
A pair of motions addressing different methods of selecting a deputy mayor – prompted by Coun. Mark Tinlin’s desire to “move forward and formalize the position” – were defeated, although the initial version fell on a tie vote. 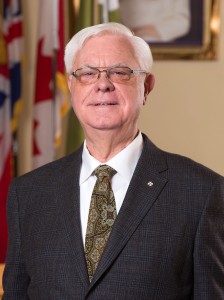 Tinlin kicked off debate by observing, “I am surprised a city this size does not have a deputy mayor.” He added the workload of the mayor “necessitates” such a position.

“The mayor cannot attend every function,” he stressed, and added the creation of a deputy mayor “is a step forward in good governance.”
The process of selecting the individual “doesn’t have to be onerous,” and remuneration could be in the form of an honorarium, said Tinlin. He suggested the councillor with the highest vote count in the 2018 municipal election could be appointed deputy mayor.
His workload comment brought a swift rebuttal from Jackson.
“You have never asked me about my workload,” admonished Jackson. “The mayor is a full-time position, I don’t feel we need a deputy mayor to attend events I can’t. It’s ridiculous.”

Tinlin refused to back down.

“I do not agree with what you have said. Sending out emails (to members of council) when you can’t attend an event doesn’t seem efficient,” Tinlin said.
The divide in council was quickly evident.
Coun. Jeff Kohler supported the position of deputy mayor, but only if it was filled via a ballot in the 2018 vote.
“All I care about is good governance,” stressed Coun. Steve Wookey. He suggested the position was about more than attending meetings on the mayor’s behalf.
Addressing several questions about the role of a deputy mayor, City Manager Wendell Graves advised, based on situations in other municipalities, “There is no clear-cut job description.”
“I would like more information on job description (before voting on any motion),” said Coun. Joan Rymal. “It has to be more specific, there is no job description.”
“I am against adding another council member (approved at an earlier meeting of council),” stressed Coun. Gary Clarke, “and I’m against adding a deputy mayor.”
Pushing for the status quo, Coun. Linda Stevenson offered “This is a well-functioning council. We do well the way we are. This would just be another layer.”
Both Stevenson and Clarke led the charge to put the matter to a vote.
The first motion to elect a deputy mayor by ballot in 2018 was defeated on a 4-4 vote with councillors Mark Burgess, Clarke, Stevenson and the mayor in opposition.
A second motion to appoint a deputy mayor from councillors elected in the next municipal vote was easily defeated 7-1, with Tinlin the lone supporter.
Council was unanimous in receiving the report from city clerk Maria Konefal as information. She had advised, “In some municipalities, whether in large municipalities with a full-time mayor or in smaller municipalities with a part-time mayor, a deputy mayor(s) or acting mayor(s) are appointed to act when the mayor is unable to attend functions, meetings, and events.”
Related post:
Utility merger could power an expanded vision for St. Thomas Elevated Park
Questions and comments may be emailed to: City Scope