Vilified for his role in the blaze that hastened the demise of iconic Alma College in St. Thomas, nine years later a shadow has been lifted from Ivan Zinn’s past.
On May 28, 2008, Zinn and a fellow Arthur Voaden Secondary School student scrambled through a back window into Alma College where they set fire to a mattress found under a stairwell, little expecting “all hell to break loose” as described by a member of the St. Thomas Police Service during a taped interview.
Just 15 at the time he and the co-accused were charged with arson and on Sept. 24, 2009, Justice Donald Ebbs sentenced them to two years probation, the maximum allowed under the Youth Criminal Justice Act. In addition, they were to undertake 240 hours of community work.
Defence lawyer Keli Mersereau had argued “There’s nothing to suggest it was intentional. Did he as a young person know the probable consequences that Alma College would burn down? The Crown cannot prove this beyond a reasonable doubt.”

Ivan Zinn at the gate to Alma College

Just days after the ninth anniversary of the conflagration at the former school for girls built in 1878, Zinn and his fiancee Melissa Da Silva accepted an invitation to speak at this year’s reunion of the Alma College International Alumnae Association held in London.

It was Da Silva who communicated via Facebook with Donna Robertson, past president of the alumnae association, and then encouraged Zinn to accept Robertson’s invitation to attend.
“Every year it hurts him more and more and it hurts me to hear what people have to say about him,” recalled Da Silva. “This year I read one negative comment and I asked him if it would be alright to post his perspective and he said OK so I wrote a little write-up on where he is now and what he is doing so people could view him as an adult rather than a 15-year-old child. That’s where it started.
“Donna reached out to me and asked if Ivan would be interested in going to the reunion. He had a fear a couple of days before. He was worried about not saying the right thing or being able to give them the closure they need. It came together pretty quickly.”
“It was for closure,” stressed Zinn. “Both for the alumnae and myself. I felt a lot of anxiety for the first hour being there. But the whole time I was there I had many ladies come up to me and say how brave I was just for showing up. In a way, I never had any doubts about doing this. It is something I needed to do and wanted to do. I just stuck in there and did it.”
Da Silva is Zinn’s most vocal cheerleader, in spite of his troubled past. 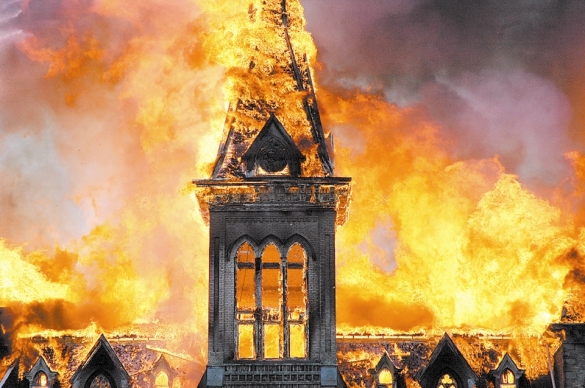 “When we first met, he said to me I don’t know if you know this but I was part of burning down Alma College. He knew I wasn’t from here and that I would hear it from someone. And the more I researched it the more I realized it was huge. He had ways of hiding how he felt and I got a lot of criticism for being with him. But it didn’t bother me. I knew who he was now and not what he did before.”

Da Silva was able to judge the person and not simply the event that would forever sear his life.
“You meet someone for the first time and you talk for hours and you bring up a story like that,” explained Zinn. “You get judgment. But I didn’t get judgment from her.”
Ironically, it was Zinn’s boyhood dream to become a firefighter.
“Last October he tried out to be a volunteer firefighter with Southwold,” noted Da Silva. “He started going for interviews and it was a personal goal to redeem himself and give back for what he took away nine years ago. It was a goal for him before the 10-year anniversary.”
While handed a two-year probationary sentence by Justice Ebbs, Da Silva suggested it is, in reality, a life sentence. 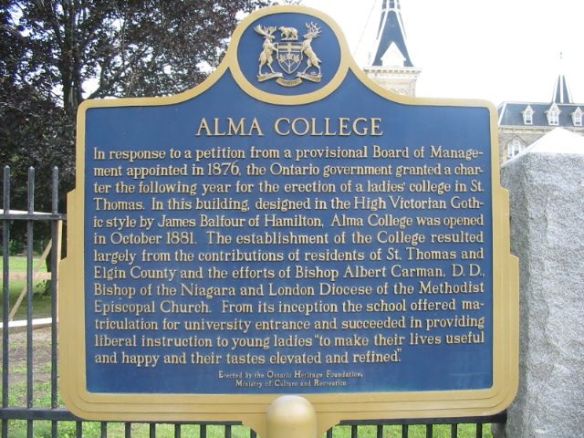 “To see him struggle was definitely hard. Especially around the anniversary and the things people had to say. What bothered us most was people would continually say they got a slap on the wrist. He got community hours. The biggest thing people don’t realize he really, in my perspective, serves a life sentence.

“This is something he has to live with for the rest of his life. There’s always someone who will make a comment or puts him down or calls him names. They don’t realize something positive did come out of it because now he teaches our children regularly about actions and consequences and who you are with. Making sure every decision you make is thought out three or four times before making it because that could change your entire life. And it did. It changed his whole life.”
And the road to healing for Zinn had to begin with full disclosure to those most impacted by his reckless action that day in a building already heavily damaged through demolition by neglect.

“It’s something I knew they needed to hear. And it’s something I needed to get off my chest. Every year on the anniversary of the fire, I would always get negative feedback and even comments on my Facebook page and people referring to me as a 15-year-old kid. I don’t think people realize it’s been nine years and I’m not a 15-year-old boy anymore.
“I’ve grown up and I’ve changed. They look at me as that kid that started the fire. Everywhere I go, there’s somebody that knows me personally or somebody’s talking about the Alma College fire or somebody has memorabilia with Alma College bricks or portraits of Alma College. It’s everywhere in St. Thomas. It’s always there.”
In memory only now.
Were two teenagers the lone culprits in the Alma tragedy? What about toothless heritage building regulations, unenforced work orders, a site prone to trespassing and vandalism and owners with no clear vision for the 11-acre site?
Did the pair sneak inside Alma with the sole aim of bringing the building to its knees?
“There was a particular group of kids that had brought it up the week before that they were going to go there and burn down Alma College,” advised Da Silva. “So would you say he went there with full intention of burning it down that day, absolutely not. By the time he turned away from where the mattress was at and he turned around, the mattress was on fire and going up the stairwell so they had to run pretty quickly out of there. So it was a shock to him that it was even happening as it did.”
In reality, was Alma College simply an accident waiting to happen?
“Being in the building itself,” recalled Zinn, “there were holes in the floors, walls were taken down and whoever was doing maintenance was taking out the railings to the stairs making it dangerous for anyone who did break in. And that’s something the three boys, me and the two others, did on a regular basis. Every other day we would go to Alma College and we would break in just for the fun of it. And we would notice things were different.
“The railings on the main staircase in the main hall were completely gone one day. It was really scary. Somebody could have died. There was graffiti and remnants of drug use inside the building.”
While not wishing to downplay Zinn’s role nine years ago, Da Silva asserted the outcome was almost inevitable. If not May 28, 2008 then the next day, week or perhaps month . . . the inevitable was a foregone conclusion.
“If it wasn’t him who did it or his friend or the people who were there that day that did it, it would have been someone who went in there and smoked a doobie, or the people who claimed to be homeless and that was the place where they were sleeping and they built a small fire to keep warm in there. That would have burnt it down. I think it was inevitable. In some way it was going to happen. We all know that but he’s always taken responsibility for it. ‘I was there and it did happen.'”
And members of the alumnae association applauded Zinn’s honesty and willingness to seek closure. 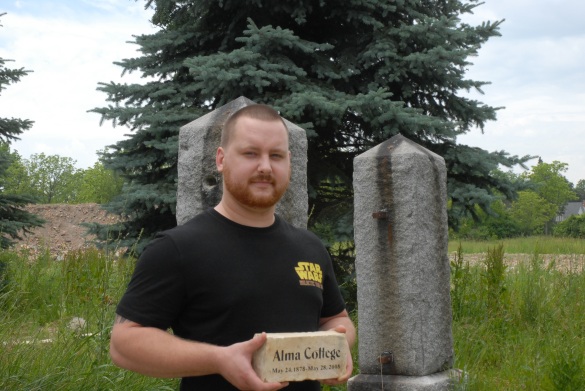 “After he was done speaking, a lot of them stood up and gave him a standing ovation,” Da Silva pointed out. “When they sat down, they were asking questions and everyone seemed so comfortable talking back and forth and I can’t tell you how many women came up and told him how courageous he was and how thankful they were he came. They were beyond incredible. They were so loving, so understanding and so patient.”
As a token of appreciation, the alumnae association presented Zinn with a distinctive yellow brick, engraved with the birth and death dates of Alma College.
“That was the turning point for him,” Da Silva observed. “On the way home he got pretty emotional talking about it. When Alma burnt down, a lot of his life went with it. When they handed the brick to him, it was like they were giving him his life back. And when I left it felt like my life was different. And that shadow that had been following him for nine years, it felt like it just left.”
“The way that I looked at it,” reflected Zinn, “the moment I left the hotel me and another boy took a huge building away from the alumnae and all of St. Thomas – the historic value of it. The moment I received one small brick felt like it made up for it. It just went away. It was totally a token of gratitude and appreciation and respect for showing up and giving them (the alumnae) piece of mind.
“I had had nothing but negative thoughts about the impact of the Alma College fire and now I have this brick, it represents something totally different and positive.”
Questions and comments may be emailed to: City Scope

10 thoughts on “Nine years after the fire, a brick from Alma College initiates healing for Ivan Zinn”