A confusing few moments at Monday’s council meeting so this corner thought it wise to confer with Ald. Jeff Kohler on what he is attempting to uncover.
To briefly summarize, Kohler was seeking to have a report brought out into open session, but the majority of council had difficulty establishing just what document he was referring to and the matter was deferred to the August meeting.
By way of explanation, Kohler noted the report – dealt with during a 2015 in-camera meeting of council – presented different location options for Elgin-St. Thomas Ontario Works, whose lease in the Mickleborough Building on Talbot Street expires this year.
Several sites for a new home for Ontario Works were catalogued, including the Colin McGregor Justice Building, vacated this month by the St. Thomas Police Service.
That particular portion of the report is what Kohler wants brought out into open session.
“I challenged it at the time as to why it was being dealt with in-camera. Something like that should have been out in the public when we were debating whether or not we were going to build a new police station.”
So what exactly is contained on Page 22 of the report?

Cost estimates to renovate the justice building for use by Ontario Works. Figures that differ from estimates presented to the previous council on renovating the building so as to remain the home of the St. Thomas Police Service.
“In my opinion, it validates what I thought through the whole process that the numbers were worked so that a new build was the preferred option. It’s more consistent with the numbers I was talking about during the (2014) election.”
If you remember, renovating the existing police station or constructing a new headquarters was a highly contentious issue in the lead-up to the municipal vote that year. Kohler and then alderman Mark Cosens both contended renovations to the existing home was a much more cost-effective option.
“This (the justice building) was being designed for Ontario Works which is totally necessary to be 100 per cent accessible. But because the public isn’t going everywhere in the building (as a renovated police station) we had options we didn’t have to do that if we didn’t want to.”
Kohler had campaigned in 2011 on a cost of $160 per square foot to renovate the justice building and he asserted this week, “When the public has an opportunity to see this report, they will be able to see that is more consistent with what I was saying at that time.”
You still have to wonder if renovating the Colin McGregor Justice Building was not a viable option for the St. Thomas Police Service, why was it being considered for Ontario Works?
City Scope has requested a copy of the Elgin-St. Thomas Ontario Works site selection report and we will report back when it is made available.
Related posts:
Narrowing the playing field on police HQ decision
Not the time to mix-master the issues
TOUCHING A NERVE
As expected, our profile earlier this week on Ivan Zinn – one of two teens charged with arson in the 2008 Alma College fire – generated considerable feedback, both pro and con.
Just days after the ninth anniversary of the blaze at the former school for girls built in 1878, Zinn and his fiancee Melissa Da Silva accepted an invitation to speak at this year’s reunion of the Alma College International Alumnae Association held in London.

Here is a sampling of comments from readers.
Al Bod writes, “Redemption is a beautiful thing. Courage and grace has been demonstrated by all involved; Ms. DaSilva, Mr Zinn and Alumni Association.”
Reader A. Baker has mixed feelings. “This was a wonderful way to bring closure and certainly an upright thing to do and I commend him, but to go further and try to shift some of the responsibility, by stating it would have happened anyway does not mean it was OK for him to do it. I’m sure he didn’t mean for the entire building to go down, but the responsibility remains his (and his friend’s) regardless of his intentions (or lack of same). He was where he was not supposed to be (as were many others) and at 15, he was old enough to know that. I am glad coming forward has brought him some peace.”
Adriana Lizotte takes it one step further. “Sadly the impact the fire had on the community and especially those who were fighting with everything they had to have the site declared a heritage site, you will always be the boys who burned Alma College to the ground.”
“What an inspiring story,” posted Laurel Shack. “It was so sad to lose this lovely, historic building but the adults in charge were just as guilty of her demise by their own irresponsibility. This boy is a man now. He took responsibility for his actions. He has paid back and it appears he intends to continue to do so by helping other youth today. The Ladies Alumnae have truly helped with everyone’s healing. Congratulations to them, to Ivan and the writer of this story for bringing this ‘closure’ to our attention. We won’t forget what happened, but perhaps we can all now understand and forgive and offer positive support to them all in future.”
Adds Elizabeth Dorrance Macleod, “Always felt bad for these boys … Not what they did but how so many vilified them. How many of us as adults can look back and realize we too did something really stupid and we’re just lucky it didn’t go so wrong! Ivan, you are more brave than most of us … I applaud your courage.”
From a personal perspective, Lori Dawn Windsor-Antaya observes, “I did not attend Alma as a student, I was however there as a dancer at a dance school camp one summer. I got to live there for a week or two and enjoy the beauty of the building. A few years later, my grandmother got married there. It was nice to return to the chapel. I went through a grieving process and was angry for a while after the fire, but kids do stupid things and holding that over them forever is a disservice to society. People that try to change and better their lives are able to learn from mistakes and forgiveness helps everyone heal. Thank you for this article.”
We’ll leave the last word to Derek Rogers.
” You can choose forgiveness or bitterness.”
Related post:
Nine years after the fire, a brick from Alma College initiates healing for Ivan Zinn
DIRECT COMMUNICATION
In the future, new homes built in St. Thomas could benefit from Direct Detect. City council was briefed at Monday’s reference committee meeting on the direct to fire station system developed in 1996 by the Kitchener Fire Department that wirelessly links smoke alarms and other home security systems directly to a dispatcher in the fire hall.
It removes the homeowner’s decision-making process from the equation should an alarm sound and results in quicker response times for firefighters. However, residents in the home would have 30 seconds to cancel the alarm.
The system can be adapted to include medical and burglary alarms in addition to monitoring levels of carbon monoxide and natural gas.
Installation cost is in the range of $600 to $1,000. If installed in a new residence, it would reduce home insurance by 5 to 15 per cent.
St. Thomas Fire Chief Rob Broadbent indicated the system had been looked at seven years ago but the feeling was it would not be of value in the city. However, it is again under consideration.
City manager Wendell Graves advised a report will be presented to council later this summer on the financial implications of Direct Detect.
WE’LL EVENTUALLY GET TO IT
Due to time constraints at Monday’s reference committee meeting, discussion on a firm policy on municipal grants to community groups and organizations had to be moved to a future date.

At a reference committee meeting in April, Coun. Mark Burgess re-opened a can or worms – council grants to community groups, a process that sees hundreds of thousands of dollars doled out on an annual basis.

Then, at a council meeting last month, Burgess unveiled a game plan whereby an identified cap would be established on how much money is allotted to groups each year; deadlines would be enforced on grant applications; and council should meet with any group requesting more than $10,000 and a scoring system should be developed to weigh the merit of each request.
A much more sane policy than currently in existence, but doling out funds to community groups has the potential to become a wedge issue with this council.
Related posts:
Neighbourhood blight to be demolished in favour of seniors residence
A hoped-for sane policy for community funding grants
NOT QUITE THERE YET
Although open for traffic up and down Sandimount Hill and on to/from Talbot Street, the Gateway Roundabout is not quite finished as of yet. 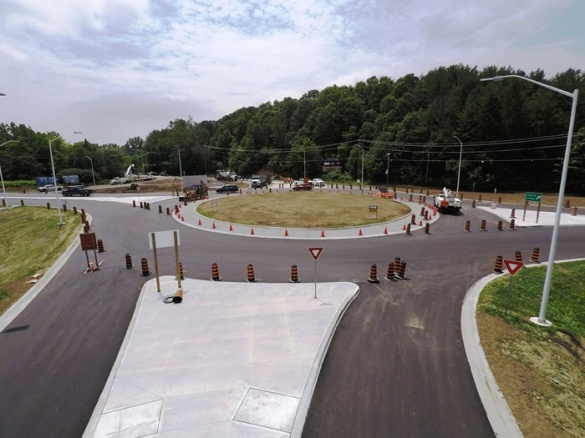 The good news, it is scheduled to fully open next week (week of June 26). Last week’s inclement weather held up application of the final pavement markings. Staff advise the ‘Welcome to St. Thomas’ sign will be completed in July and the centre island sculpture being crafted by Scott McKay is due to be installed in December.
This traffic circle is the city’s first two-lane roundabout and is a unique approach to the city’s western gateway.
Related post:
Details of Gateway Roundabout project revealed at public open house
OF NOTE
A public meeting will be held from 4:30 to 7 p.m., Thursday, June 29 at Memorial Arena to deal with the city’s Employment Lands Comprehensive Review. 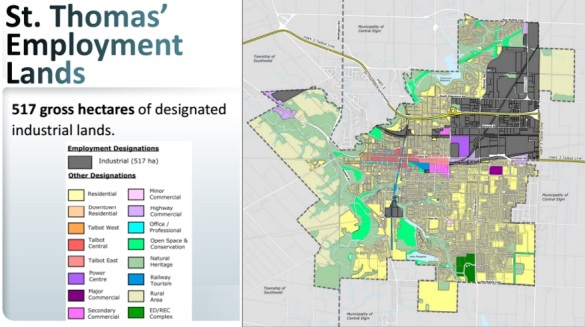 The review is an assessment of lands designated as industrial in the city’s official plan and documents the status of each parcel. It will recommend changes to the existing employment land designations and policies to meet the city’s long-term need.
The city currently has 517 gross hectares of designated industrial lands.
According to the review, from 2008 to 2016 1.5 million sq. ft. of previously vacant industrial space has been absorbed and has accommodated 980 jobs.
The review advises there could be enough designated employment land to meet the 20-year demand, however, some of the lands are not “shovel ready” and require extension of servicing and there are limited large parcels that can accommodate land-extensive industries.
Questions and comments may be emailed to: City Scope