For several years it was a pot-mark on the Wellington Street landscape. The burned-out hulk of the former Ramada Inn proved such an eyesore, Craig Geerlinks and Adam MacLeod across the street at Geerlinks Home Hardware wrote a letter to council in December 2015 pointing out “The building has been abandoned for more than a few years. We are concerned this blight on the neighbourhood, and the city in general, will continue with no end in sight.”
They concluded their missive with the fact many customers leave the store “having purchased home improvement materials, those customers look across the street and cannot help but be disheartened that their efforts at improving their properties are offset by derelict and abandoned buildings such as this one . . . Out-of-town visitors attending activities at the Timken Arena and railway museum drive past the remnants of this now abandoned building and must wonder about our community spirit.”
Change is in the wind, although the neighbours on Erie Street may not embrace what is proposed. 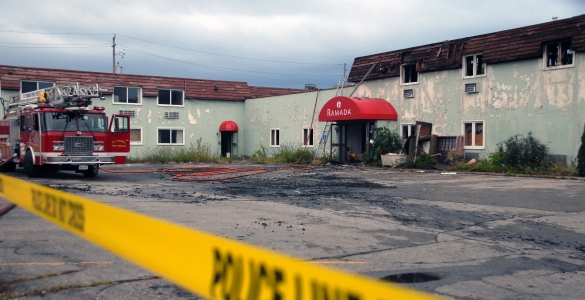 In a report to council, the Sunray Group of Companies is proposing to construct a six-storey retirement residence at 292 Wellington Street that would front on Erie Street.
Sunray Group is a family owned corporation specializing in hospitality and development. It has partnered with Marriott, Starwood, Radisson, Best Western and Choice Hotels, and owns and operates 30 hotels and employs more than 1,500 people in Ontario and Quebec.
Its proposal is an update to a 2012 plan that would have seen the Ramada Inn converted to a retirement facility. An amendment to the city’s official plan that year cleared the way for proceeding with the home. The proposal was scuttled in 2014 when a fire destroyed much of the vacant building. 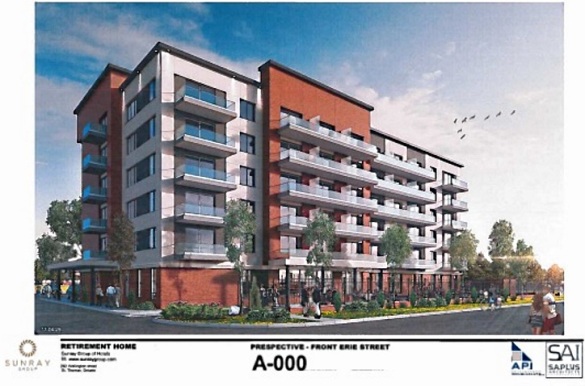 The revised undertaking calls for 80 one- and two-bedroom units with the applicant recently obtaining permission to demolish what remains of the Ramada Inn.
Supporting documentation indicates there would be little impact on local traffic flow and the structure would have no negative shadow effect on the houses on the south side of Erie Street. Fifty-two on-site parking spots are to be included for residents, visitors and staff. This is less than the recommend figure in the city’s official plan and would require an amendment.
The retirement home would include a dining room, lounge and a doctor’s office on the ground floor. It is anticipated there will be approximately 10 full-time support staff on site at any one time.
In the supporting documentation, Dave Hannam, senior planner for Zelinka Priamo Ltd., concludes “The proposal results in the removal of a dilapidated building and the creation of an attractive, high-quality development on a currently underutilized site, which will provide much-needed housing for seniors.”
Related post:
Permanent solution to a temporary fix
DONE DEAL
A year after announcing a tentative offer, the city and London developer Shmuel Farhi closed the deal a week ago Friday for the purchase of two Talbot Street properties. 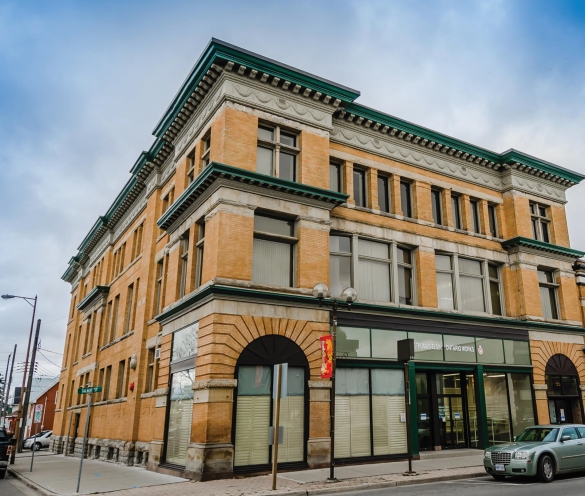 The city has acquired ownership of the Mickleborough building at 423 Talbot Street – the home of Ontario Works – and a parcel of land on the south side of Talbot Street between William and Queen streets extending south to Centre Street.

The appraised value of the building is $4 million and under the deal, Farhi Holdings will donate $2.3 million in exchange for a tax receipt and the city will pay the remaining $1.7 million.
The city will pay $1.4 million for the second property at 230 Talbot Street, with Farhi Holdings donating $400,000 back.
The site is being considered for a community social services hub and would house the offices of Ontario Works.  The land might also be considered for phased-in affordable housing units.
Council will be asked to approve the sources of funding for the purchases at Monday’s meeting, with a further report to be presented at the May 15 meeting.
Related posts:
What’s in a name? In this case, $2.7 million
City and London developer Shmuel Farhi reach deal on west-end properties
LIVING WELL
The appearance of dedicated beds for St. Thomas and Elgin is unlikely before 2019, however since we have been identified as an in-need area, progress is being made to improve the delivery of palliative hospice care.

In a presentation to city council in February Lisa Penner, palliative care lead and clinical co-lead with the South West Local Health Integration Network advised the provincial government is being urged to add 200 hospice-care beds across Ontario.
The preferred model for St. Thomas/Elgin would be a hospice able to accommodate six to ten beds.
As a stop-gap, Elgin and Oxford counties last year received what are known as hospice palliative care outreach teams.
“That team is available 24 hours a day, seven days a week to provide service in a person’s home,” said Penner. “It’s really for individuals who want to remain in their home for palliative care.”
Well, next week (May 7-13) is National Hospice Palliative Care Week with the theme being living well right to the end of life.
To showcase the work of the outreach teams and provide insight into hospice palliative care, a free event is being held from 1 to 4 p.m. Tuesday, May 9 at the Knights of Columbus Hall on Wellington Street.
As Penner stresses, “it’s really about having conversations with individuals, asking ‘If something ever happened to you, what are your wishes, where would you like to be and who is your substitute decision maker?’”
Related post:
Out from under the covers: The need for hospice-care beds in St. Thomas/Elgin
HITTING A NERVE WITH COMMUNITY GRANTS
Like two boxers parrying in the ring, Coun. Mark Burgess and Mayor Heather Jackson continue to dance around the issue of a clear policy for doling out hundreds of thousands of dollars in community grants.
Burgess briefly touched upon the lack of consistency last month during one of council’s reference committee meetings. His passing comment elicited conflicting views from other members as to the role council should play in determining a protocol.
Well this past Monday, Burgess presented a more detailed game plan that won nods of approval from several of his peers.
Burgess would like to see an identified cap on how much money is divvied out to community groups each year. The present guideline is .5 per cent of the current year’s budget.
He would like to see deadlines enforced on grant applications as council seems to be hit up for money on a continual basis.
Burgess also feels council should meet with any group requesting more than $10,000 and a scoring system should be developed to weigh the merit of each request.
Jackson’s frustration with revisiting the issuance of grants was clearly evident as she stressed the matter will be dealt with at a future reference committee meeting.
“I’m getting really tired talking about this,” warned Jackson. “It’s a small amount (of money) that takes up a large amount of time.”
So the fact it is a small amount – although several hundred thousand dollars is still considerable when it comes out of the pockets of ratepayers, don’t forget – means it should just be handed out willy-nilly with no discernible policy?
Not exactly fiscal responsibility to those who elected you to office.
Related post:
A hoped-for sane policy for community funding grants
KEEP AN EYE ON
Contract negotiations underway between firefighters and the city. A contentious issue is the push by firefighters to adopt 24-hour shifts, something resisted by the previous council.
Of note, firefighters have demanded parity with St. Thomas Police in recent contract talks. Yet you don’t see city police demanding 24-hour shifts nor do they have the ability to bank unused sick pay up to a total of six months and then collect the monetary equivalent upon retirement.
I guess parity only comes into play when it’s something they’ve got that you want.
Questions and comments may be emailed to: City Scope