Little did a father-and-son team of journalists realize attempting to communicate to their readers the details at a possible crime scene would haunt their lives for an agonizing 16 months – and possibly impact them forever – due to a lack of communication on the part of police.
On June 24 of last year, Aylmer Express publisher John Hueston and his son Brett navigated around a road-closed barrier on Springfield Road at Nova Scotia Line in Malahide in an attempt to gather details relating to information received via an Elgin OPP media release of a car driven over the cliff edge and into Lake Erie the previous day.
As they headed down the short stretch of road near to where emergency workers were preparing to lift the vehicle – with a deceased person inside – out of the water, they were intercepted and a tense exchange followed between members of the Elgin OPP and the Huestons.

When the pair did not leave the scene after warnings to do so, they were arrested, handcuffed and detained in jail for several hours. Two cameras were seized as evidence.
They were charged with obstructing police and failing to leave premises when told to do so by police in a case that caught the attention of media outlets across the country as a battle to uphold freedom of the press.

“This does not help the relationship between police and the media. I hope they can find a way to resolve this.”

Monday (Oct. 22) at the Elgin County Courthouse in St. Thomas, Justice Glen Donald acquitted the Huestons on all charges, citing a lack of communication on the part of police and noting there was nothing reckless in the actions of the two journalists.
Justice Donald stressed police failed to notify the Huestons their arrival at the scene was during a critical time in recovery of the vehicle.
“Police never told the Huestons why they had to leave or where they could stand to take pictures,” he advised.
Justice Donald added police did not have the authority to evict the Huestons, who were on Springfield Road at the time, as they were standing on public property.
“The Huestons had every right to be present,” advised Justice Donald.
In closing, Justice Donald pointed out “This does not help the relationship between police and the media. I hope they can find a way to resolve this.”
Outside the courthouse afterward, London lawyer Gord Cudmore suggested it was a precedent-setting decision.
“I think so, I think it clarified the role of the press versus the role of the police. I think it was a very thorough and well-reasoned decision. We’re obviously pleased with the result.” 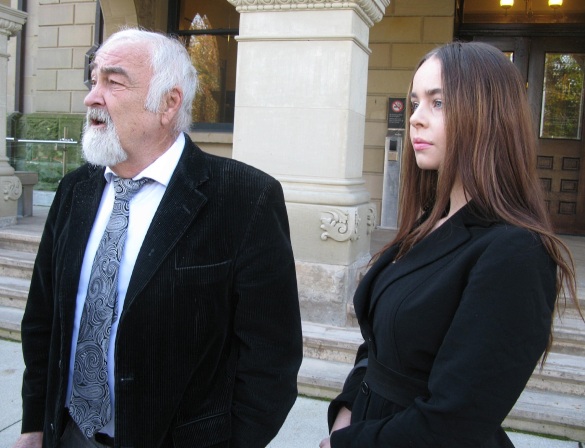 Cudmore added journalists can proceed with their reporting knowing, “There are restrictions, in that you can’t interfere with police doing their job, but you have a right to report. And police have obligations too.
“I think his honour’s decision recognized both obligations on both sides of the issue. The press has certain obligations in carrying out their duties and their rights, as do the police.”
Commenting on the charges, Cudmore explained “Under the Trespass to Property Act, it has to be an occupier or someone authorized by the occupier to have them leave or ask them to leave and that was not done. (Initially the Huestons had been standing in a field near the scene.) There was no evidence the occupiers, the homeowners, the farm owners, wanted them to leave and I think the judge very clearly said the police can’t latch on to that to give them the authority under the trespass act. I think it was a correct decision on both those.
“If you are on public property, they have to give you a good reason why you can’t be there. It’s public property for a reason. If they are carrying out an investigation, they have to have a good reason to ask you to leave. And, my experience with the press has always been that if you give them a good reason, they will leave.
He continued, “Clearly, under the more serious charges of obstruction, his honour found the action of the people may have had the effect of obstructing, but there never was any intent whatsoever on the part of the Huestons to obstruct. They were there doing their job.
“And I can tell you, had the police informed them as to the reasons they wanted them to leave, they would have left. They weren’t there to interfere with the police doing their lawful duties. They were there to do their lawful duties.”
Standing next to his son, John Hueston said they are very happy with the decision.
“I think we’re all working toward the same end. I think we’re trying to work toward a better Canada and I don’t think that has changed.”
However, John added the relief is tempered by the feeling he will never get over the events that day on Springfield Road.

“I want everybody to know we never did anything that any regular citizen would see as being offensive in any way. We did not do anything to obstruct anybody. There was no intent and, moreover, there was no obstruction.
“We’ve been doing this for years and years and years and we never changed our pattern at that site. Something happened and we don’t know what it was, and I’m guessing we’ll never know what happened that caused them to arrest us and handcuff us behind our backs and take us to jail and leave us in jail for several hours. It’s a very unusual thing. I won’t get over that.”
“I would call it relief and not much more than that,” added Brett Hueston. “We knew from the beginning we hadn’t done anything wrong. This is just backing us up. It took us almost a year-and-a-half to get, but we got there and we’re very happy with the outcome.

“In a free country like ours, the police are there at our behest. It shouldn’t be adversarial and I guess it’s one of the things I’m seeing with policing in this country.”

“Now the press, in general, has an idea of what it means to be at a police scene and the importance of communication. We’re all in the communications business. Part of the comment was, if the police had only communicated a little bit, we wouldn’t have been in this position.
“I think that’s the most important thing for us and for everybody in this job. It’s not an adversarial relationship we’re looking for, it’s mutual. Just a little information would have saved everybody this whole mess.”
As to that relationship with police, it is something that is “very thin right now,” stressed John.
“I don’t think there is much of one. We seldom sit and talk to the police. I think they need to know a little bit more about what we do and maybe we need to know about the stresses that are on them.
“In a free country like ours, the police are there at our behest. It shouldn’t be adversarial and I guess it’s one of the things I’m seeing with policing in this country. It seems to be coming much more confrontational than it used to be, and that’s not my idea of good policing. That’s more United States policing. The European model is much more of a peace-maker role, which is what I feel is what we should be heading toward.”
Ironically the decision came down the same day voters exercised their democratic right to cast their ballot in municipal elections across the province.
“I have a young family and I have an extended family at work,” added Brett. “It’s been hard on all of us. This means we can go back to concentrating on the things that we are good at, which is journalism and the printing business. It’s back to work with a lot less weight on our shoulders than there was at 9:30 this morning.”
Although pleased with the decision, the elder Hueston can only worry about the long-term implications for his son.
“How is this going to play for my son at the border. Have you ever been in trouble with the law? Ever had a criminal charge? Have you ever been in jail? How does he get across the border now? This could affect him even though we have been found not guilty. This could go with him the rest of his life. It’s a big penalty.”

In a statement issued by the Canadian Association of Journalists, president Karyn Pugliese noted, “The police did not do the right thing in the first place – they interfered with the ability of journalists to do their job and inform the public. They also failed to do the right thing in the second place, by refusing to admit they made a mistake and forcing the issue to court.

“I hope in future, this decision compels police officers to recognize the important democratic role the media have in serving the public’s right to know.”