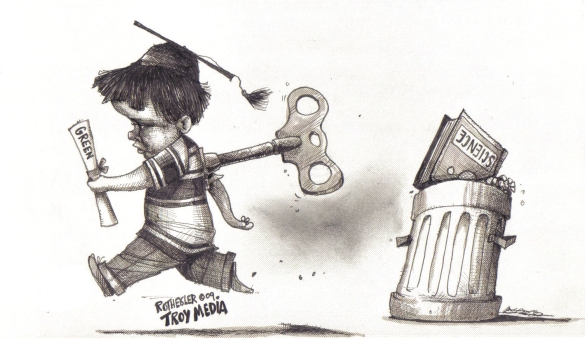 My grandson is five years old. After his second week in school, he asked his father what he was doing about global warming.

Think about that for a moment. Does anyone believe that a five year old can even understand the controversy surrounding the science of global warming, let along question what he is being told?

Rather than teaching my grandson the knowledge he will need to succeed academically – analytical skills and open mindedness, among others – his teacher is spending time indoctrinating him with her beliefs on global warming.

I am outraged. As Ignatius Loyola, founder of the Jesuits, said, “Give me the child until he is seven and I will show you the man,” and classrooms today are definitely practicing what he preached.
END_OF_DOCUMENT_TOKEN_TO_BE_REPLACED

Our municipal officials have had a relatively easy go of it when it comes to fielding criticism from a disgruntled electorate. Sure, every member of council, Mayor Cliff Barwick included, fields calls and emails from upset residents on a weekly basis.
That is about to change Monday evening as former mayor Janet Golding turns up the heat as she stands before council to demand action on a matter no alderman has had the moxie to confront — unsafe crosswalks.
The Times-Journal headline two weeks ago today lays it on the line, “Two crosswalk lines … ‘mean nothing.’
END_OF_DOCUMENT_TOKEN_TO_BE_REPLACED