Nearly a year ago, Marie Turvey, chairman of the CASO-St. Thomas Trans Canada Trail committee, warned the trail may have to be moved outside the city if council doesn’t “grab the bull by the horns” and do something to save it.

Turvey had been in discussion with TBR Developments, which purchased the CASO lands after CN Rail formally abandoned them.

The St. Thomas leg of the Trans Canada Trail first opened in 2001 and was constructed mainly on the CASO railway lands (as far west as Stanley Street).

The issue comes before council again Monday as the CASO Corridor Committee, comprised of Mayor Heather Jackson-Chapman, Ald. Mark Cosens and Ald. Lori Baldwin-Sands, presents its first report. The Trans Canada Trail organization (the national body) is willing to provide $55,000 to assist in the cost of an engineering investigation of the MCR trestle over Sunset Drive, should the trail be routed over that structure.

Well that option may be a moot point as residents of Centre Street, in the area of King Street, are appalled at the wanton destruction of more than 40 black walnut trees as TBR Developments levels the railway embankment and clears the land as it has already done along the entire corridor. 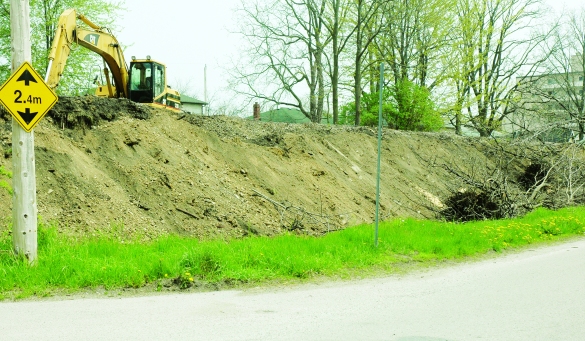 One resident wrote City Scope to complain, “the result is a denuded stretch of earth and the loss of a natural area and a place of beauty, gone forever.”

No notice was given to residents of the area and the city is powerless to intervene as it has no preservation bylaw covering removal of trees on private land.

Ross Tucker, the city’s director of parks and recreation, visited the area this week and admitted, “it’s a mess. There goes those people’s privacy for years.”

City Scope is attempting to speak with a TBR representative to determine the ultimate fate of the railway right-of-way.

It’s far from an attractive route for the Trans Canada Trail.

“I am a single father on a fixed income and I do not think this is right.”

When Aubrey Bowerman drove over a water-filled pothole on Fifth Avenue last month and suffered a fair amount of damage to his car, he called city hall to seek compensation.

After a lengthy runaround from the city’s insurance adjuster, Bowerman was advised unless there are at least two complaints, it sucks to be you.

To add insult to injury, within an hour of his call to the works department the pothole was filled, so not much chance of a second complaint.

As the 15 property owners on Montgomery Road discovered in 2009 when council nixed a compassionate grant for $1,000 after their properties were flooded — in some cases for the third time — the city’s attitude is go ahead and sue us.

In the meantime, Bowerman is out of pocket $452, through no fault of his own.

Precious dollars for a dad on fixed income.

City council will be forced into a mediator’s role Monday when the Downtown Development Board squares off against the North American Railway Hall of Fame over disbursement of funds last summer.

Muscat notes the DDB has not received a repayment of this loan.

Plenty of questions should emanate from this discussion.

Is the DDB in a position to be loaning money to another organization? Is it the intention of NARHF to use a portion of the $50,000 allotted to it in this year’s city budget to repay the loan? Will the DDB in turn use the $10,000 to fulfill its Timken Centre capital funding commitment?

If so, then aren’t city taxpayers ultimately paying down an additional $10,000 on the $12.1 million facility.

Much more to follow next week in this corner.

“People in Ontario and Canada are seeing us as a very positive alternative to what has been seen to now as the Big 2.”

Kathy Cornish, who is to be acclaimed this Sunday as the NDP candidate for Elgin-Middlesex-London in the October provincial vote.

City Scope appears Saturday in the Times-Journal. Questions and comments may be emailed to: mccallum@stthomastimesjournal.com.