Down the highway in The Big Smoke, the only white stuff grabbing media attention is the cocaine being snorted by Mayor Rob Ford
Meantime, here in St. Thomas the traditional white stuff – that would be snow – has sharply divided residents into two camps: kudos to city staff for a great job versus whaddya mean two weeks to clear sidewalks.
Granted we were the recipient of a winter’s-worth of snow in one dump, however the Times-Journal has uncovered two facts worth considering.
Dave White, the city’s supervisor of roads and transportation, chose a rather untimely week to use up holiday time and one of three sidewalk plows succumbed to illness at a most inopportune moment.
Nevertheless, 80 to 90 centimetres of snow over a four-day span has taxed the city’s resources, not to mention the patience of city residents.

And resulted in one dandy of a snowball fight on our Facebook page.
“I see the city doesn’t do anything for the Ross St. Business District,” posts Mark Putters. We are still waiting for the sidewalk plow to do the sidewalks in this area.”
That was written late Tuesday afternoon before Round 2 Wednesday night.
“I walk downtown to work and find it appalling that Talbot Street was not even done this morning at 8ish.” A comment from Nancy Hunter Luftenegger on Thursday afternoon.” 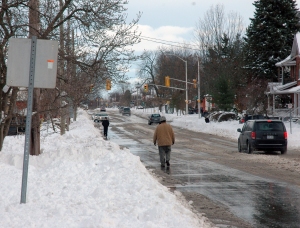 And then Paul Whistlecraft wrote, “Unable, maybe, or possibly unwilling — it may be time to resurrect that old bylaw.”
The bylaw Paul refers to was alluded to by Mayor Heather Jackson in a T-J interview where she encouraged residents and property owners to clear sidewalks within four hours of a snow event.
“It’s a very old bylaw but it is still there, so we urge people, if they are able, to do that,” Jackson advised.
Perhaps the city needs to adopt an incentive now being implemented in Kingston.
Their Snow Angel program seeks to reward, in some fashion, residents who assist their neighbours in clearing sidewalks and driveways.
A wonderful example of creativity in play at city hall.

ABOUT TIME
We can only hope MPP Jeff Yurek has a clear sail at the legislature on Thursday when debate begins on his private member’s bill, Ryan’s Law: Ensuring Asthma Friendly Schools.
Motivation for Bill 135 was the death last November of 12-year-old Ryan Gibbons, a Grade 7 student at Straffordville Public School who went into medical distress and later died at Tillsonburg District Memorial Hospital.
This heart-wrenching observation from Ryan’s mother, Sandra Gibbons, posted on the T-J Facebook page, offers an insight into every parent’s worst nightmare.
“I really do not want this to ever happen to anyone, nobody deserves a phone call like this, go to work and never seeing your child alive again is the worst thing anyone can go through no matter how long it has been,” posted Sandra.
“The pain never goes away. October 09 2012 is a day I will never forget…and if Ryan Gibbons’s death is a lesson that asthma isn’t just something you live with but it is something that should be taken seriously. He will live on with all of us, always. I really want this Bill to carry for the sake of others because as I said this is preventable with the right emergency plan, actions, and knowledge.”
Wrap this one up for us, Jeff.

A HEADS UP
Employing radio lingo, City Scope will be on location Monday morning covering the mayor’s summit, being held to develop community-wide standards of care for residential care homes in St. Thomas.
Residential care homes are facilities that provide board and lodging for individuals who need supervision of their daily living activities.
The goal is to have the draft standards of care ready for submission to city council later this month.

WHERE’S PAUL?
Last week in this corner we documented wish list items that didn’t make the cut in 2014 Part 1 capital budget deliberations last month at city hall.
One of those items is a bit of a puzzler when you consider we’ve got a nicely renovated library that is now requesting $25,000 for a space study.
You would think after CEO Rudi Denham showed popular, long-time employee Paul Blower the front door a short time ago there would be extra office space.
We’ll have to delve further into that story for a future column.

KEEP STEPPIN’ OUT
A loud shout-out to homeless advocate Jason McComb who, today, is in Port Hope and sounding wonderfully invigorated as he continues eastward on is trek to Ottawa.
So much so he’s in the planning stages for a cross-Canada odyssey beginning in the spring. He’s so upbeat he told us he wants his permanent office to be on a road somewhere that leads to hope for the needy and homeless, including vets and seniors forgotten along the way.

QUOTE OF THE WEEK
“It’s easy to keep putting off capital expenditure decisions each year and I think it’s come to a point where St. Thomas has to recognize that it’s time to spend some money.”
A quote from St. Thomas treasurer Bill Day in November, 2011 but equally applicable Monday when city council deals with a report warning the city is underfunding capital projects and is now handcuffed by a massive infrastructure funding deficit.