The city’s new waste contractor takes to the streets in a couple of weeks and we can only hope the launch is a smoother affair than the day-to-day operations up in Whitchurch-Stouffville, north of Toronto.
The new contractor, Green for Life, takes over from BFI in St. Thomas, which in turn replaced Green Lane Environmental.
Green for Life not only serves Whitchurch-Stouffville, but several other municipalities in York Region where it has been experiencing mechanical issues with its trucks, leading to missed collections.
That has been compounded by a lack of communication from GFL on the service disruptions.

All of this reached a turning point last month according to news reports in the Stouffville Sun-Tribune.
“It was really disturbing the lack of communication between the staff at GFL, they basically unplugged their phone lines and left our staff and residents out to dry,” advised Coun. Richard Bartley. “This is unacceptable.”
According to a report to municipal council in early January, over 400 calls were fielded by town staff over a two-day period and another 1,000 or so the following week regarding the lack of blue box and green bin collection.
Coun. Phil Bannon told the Sun-Tribune, “Our staff took the brunt of the blame and the complaints and they didn’t deserve it.”
How about this outburst from Coun. Joe Sponga, as quoted in the Sun-Tribune: “Get your act together and pick up the garbage like you agreed to.”
Is this what residents can look forward to when GFL assumes waste collection?
Does Michelle Shannon over in environmental services at city hall have operators standing by the phones in case the wheels fall off, literally.

A MATTER OF INTEGRITY

CAO Wendell Graves has drafted a code of conduct for members of city council, its boards and committees for consideration next month.
Based on highly questionable behaviour from several quarters in the past, it’s an undertaking long overdue.
In the section dealing with interpersonal conduct and communications, the reins are about to be pulled in on some individuals and practices.
Most of the restrictions appear to be nothing more than common sense, however over the last three or four terms of council, that is a commodity often in short supply.
Some examples from the proposed code of conduct.
No member shall act as a lobbyist before council, its boards or committees.
A member shall not refer a third party to a person, partnership or corporation in exchange for payment or other personal benefit.
No member shall use city facilities, services or property for his/her election or re-election campaign.
Members are not permitted to individually direct the actions of staff, except as authorized by council.
Where a matter discussed at an in-camera meeting remains confidential, no member shall disclose the content of that matter.
You would think this is pretty straightforward stuff that wouldn’t require a watchdog in the form of a code of conduct and the appointment of an integrity commissioner.

Are the lights dimming on the Holiday Fantasy of Lights, held each December in Pinafore Park? 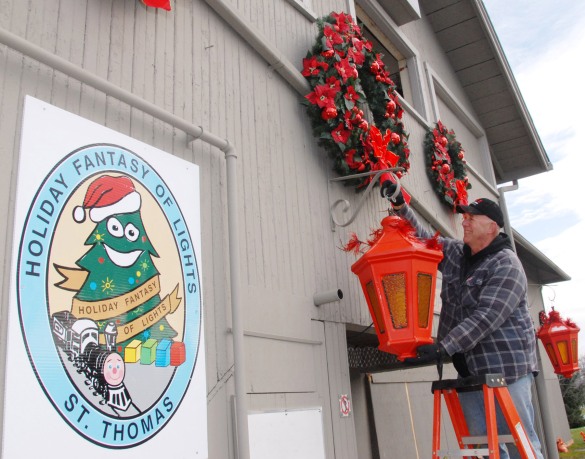 The event’s chairman, Russ Whalls, will appear before council Monday regarding the future of the colourful winter attraction.
From what we understand, the number of displays and total attendance was off this time around.
Perhaps a re-think on presentation and marketing the seasonal showcase is in order because it is well worth saving.

OUR OWN MUNSTER MASH

In addition to the St. Thomas Tom Zombie Festival this summer, the city has an opportunity to host a 50th anniversary celebration like no other.
Aldermanic hopeful and community theatre performer John Allen has submitted a letter to city council outlining a unique tourism opportunity for St. Thomas.
Seems 2014 is the 50th anniversary of the whacky television sitcom, The Munsters. It first aired Sept. 24, 1964 and ran for 70 episodes.
Butch Patrick, who played Eddie Munster, is embarking on a tour promoting the anniversary and would love to include St. Thomas on the itinerary.
He was in town last year for the Tom Zombie Festival and was quite taken with what we have to offer and would love to return.
But that’s not all, according to John. The opportunity exists to include Pat Priest – she of Marilyn Munster fame – in the anniversary celebrations.
John is hoping the city will see its way to grant him $2,000 to get the ball rolling.
How can you say no to such a deal?
And then we can find out how long it took Butch to get his makeup applied.
In case council nixes the deal, the answer to the above is one hour.

“For many municipalities including St. Thomas, the stark reality is that the manufacturing jobs that have been lost over the last decade are not returning. In this economic environment, new sources of wealth creation and economic development must be found.”
An excerpt from the City of St. Thomas Cultural Asset Mapping Project unveiled following last Monday’s council meeting.