If you’ve read the Page 3 story in Saturday’s Times-Journal, you’ll discover determining when to declare a conflict of interest can become quite the ethical dilemma.
Mayor Heather Jackson is living that now after being challenged by former St. Thomas resident and 2010 aldermanic candidate, Bill Sandison in a letter forwarded to the T-J.
The mayor steadfastly believes she was not in a conflict situation – according to the Ontario Municipal Act – when she debated and voted on the awarding of an Information Technology contract to Ascent (formerly St. Thomas Energy) in spite of the fact she is romantically linked to an employee in that very same department.
We consulted with a pair of municipal governance experts who argue perception is reality to most constituents and taking the high road would be in order when there is the least whiff of a conflict.
“There is no question that the cautious thing to do would have been to not vote,” advised Western University political scientist, Andrew Sancton.

Municipal consultant and author, George Cuff, is quite succinct with this rule of thumb.

“My argument to seminar groups is if you want to know what conflict looks like, when you get out of the shower in the morning and stand in front of the mirror, you ought to look at the mirror and say, ‘is there any item on tonight’s agenda in which I have more involvement than the average person in this community’.”
Cuff adds, Jackson – or any alderman unsure of declaring a conflict – ideally should have approached council in the following fashion.
“If I am to stay (to debate and vote on a matter) I need you to vote to say my perceived conflict is so marginal that your motion is directing me to stay and participate.”
Sage advice for all current members of council and every single individual who has or will file nomination papers for the October municipal vote.
And surely, if Jackson felt uncomfortable with that approach, she could have taken aside a senior administrator, such as CAO Wendell Graves or then-treasurer Bill Day, who was over-seeing the contract process, to seek their advice.

A GREAT SUGGESTION
Reader Terence Vannatter of St. Thomas submitted a letter to the editor which was printed in Wednesday’s Times-Journal that included a timely consideration, in light of what has become the most contested issue in St. Thomas since debate over where to locate the city’s proposed twin-pad arena.
He writes, “We currently have a growing controversy regarding the decision(s) for our police headquarters. 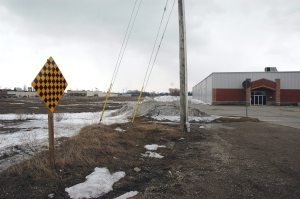 “There is a petition against building a new structure and it is growing in signatures. In my humble opinion, this petition is not a worthy/ reliable source of the community’s outlook on this issue and simply represents the opinions of a select few, reinforced by propaganda and fear.
“Having said that, we are a democratic society and everyone is entitled to a voice.
“In an effort to resolve this issue, and do it in a way that will effectively allow the entire community to review and understand all the facts behind this major decision, I would like to make a suggestion.
“Why not have an old-fashioned town hall meeting? Publish all the facts beforehand as well as print and distribute fact sheets regarding this issue at the meeting.”
The matter of a town hall meeting was raised at last week’s gathering of the police building committee and the suggestion made to hold such an event later in the summer.
For heaven’s sake, host a town hall meeting sooner rather than later.
Critical facts need to be presented to all interested ratepayers, no matter which side of the fence they choose.
Pertinent information gleaned from the report submitted to council from Rebanks Pepper Littlewood Architects that notes, “The building does not meet current requirements for accessibility. An elevator would have to be added, likely on the building exterior (the current elevator, in the middle of the building, only connects the detention area on the main floor to the second floor).”
Or how about this critical consideration from the same report authorized by all members of council.
“The building is not designed to meet post-disaster structural standards as required under section 4.1.2 of the Ontario Building Code for police buildings – such structural upgrades would be expensive and extremely disruptive.
“According to the 2006 edition of the Ontario Building Code, load-bearing masonry is not permitted for post-disaster structural use, even if the structural system had the load-bearing capacity.
“This alone, subject to interpretation of the applicability of the Code, could preclude use of the current building as a police facility.”
One more point from this report that needs airing in a town hall meeting.
“The costs for combined upgrades for accessibility, structural upgrades to meet post-disaster requirements, mechanical and electrical upgrades, exterior repairs (new roof) and other interior modifications could meet or exceed the costs of new construction.”
However, we have members of council – obviously expert in building code, the Ontarians With Disabilities Act, electrical and mechanical design, architectural drawings and the like – who figure a couple of weekends with some drywall and cans of paint and the police will be living high off the hog.

WHO HAS DECLARED
With four months to go until the close of nominations at 2 p.m. Sept. 12, here is the updated list of who has filed their nomination papers.
In the mayoral race, Heather Jackson set the tone early and remains the only candidate declared at this time. Only a matter of time before she has company.
On the aldermanic side, five hopefuls have announced their intention to run and one name removed from the list due to the death last week of Ron Fugard.
Linda Stevenson is set for her third aldermanic race and Rose Gibson is chasing office for the fifth time.
Joan Rymal is taking a second stab at success. Newcomer Jacqueline De Leebeck is primed and ready to go, as is Central Elgin Collegiate Institute teacher Steve Wookey, who declared his intent this week.
And on Friday, Catholic school board trustee Bill Hall sent along this note.
“This being Education Week, I thought it was appropriate to file my papers today to run again as the Trustee for Elgin County on the London District Catholic School Board.”

QUOTE OF THE WEEK
“And perception becomes reality in the mind of the public pretty quickly.”

Municipal consultant and lawyer George Cuff speaking to the Times-Journal on the potential pitfalls facing an elected representative when they choose not to declare a conflict of interest when dealing with official business.

City Scope appears Saturday in the Times-Journal. Questions and comments may be emailed to ian.mccallum@sunmedia.ca