She beat out 11 other candidates for the job of director at Ontario Works back in February of 2011, so where is Barbara Arbuckle today?
The question was prompted by an email sent our way.
“She was there for a couple of months then disappeared,” writes a curious reader. “It seems to be quite a mystery in the department and out as to whatever happened with her.”
Yes, it is a mystery as her name still appears online in the city’s staff directory. However when you call her phone extension the line goes dead.
A call to city manager Wendell Graves on Friday resulted in a guarded response.

“I can’t say a lot but she’s still the acting director and Barbara is still on leave.”
That’s been the case for some time.
“It has been some time, yes,” advised Graves.
Is she on medical leave or stress leave?
“I really can’t say any more about that,” Graves responded.
Is Arbuckle still on the city payroll?
“I can’t say anything about that,” Graves reiterated. “We are working to a resolution.”
A bit of a shot in the dark here but could this have anything to do with the city’s domiciliary hostel program and specifically past history at Tara Hall?
In 2013, city council dealt with the 36-bed, adult assisted-living home that dates back to 1988. It came under new ownership in 2014 and re-branded as New Beginnings Residence.
Tara Hall was one of several unregulated residences in St. Thomas that provided lodging for vulnerable individuals who need supervision.
The facility was on a month-to-month contract with the city for the provision of lodging and previous owner Jim Akey was the topic of discussion behind closed doors at city hall, as confirmed at the time by Ald. Jeff Kohler.
If memory serves, former alderman Gord Campbell played a key role in these discussions.
We also recall Arbuckle being quite outspoken about the Tara Hall/Jim Akey situation.
Is her absence the result of a costly legal matter, another in a growing list of similar episodes?

A new beginning but what about the ending

ALL QUIET ON THE WESTERN FRONT
It was with much fanfare this past April that Graves announced the municipality has extended a conditional offer to London developer Shmuel Farhi to purchase a vacant plot of land on the south side of Talbot St., between William and Queen streets, and extending to Centre St. 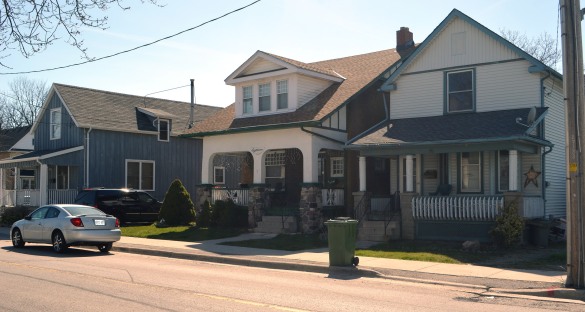 The site is being considered for development of a community hub to house the Ontario Works department and the Central Community Health Centre, both currently occupying office space along the north side of Talbot St.
The property — once pitched by Farhi to Elgin St. Thomas Public Health as a possible new home — might also be considered for phased-in affordable housing units, advised Graves who added, “We’re now in a due diligence period and we will be doing that until mid-August.”
So, how’s that working out for the city today?
“We had entered into some agreements of purchase of sale with Farhi Holdings for that (property). We had some due diligence stuff that we had to sort out by mid summer and we’ve been working at that.”
By the tone of this conversation it sounds like there are issues at play here.
“From some of the information we’ve gathered,” Graves continued, “we’ve got some soil issues we need to deal with at that block. We are going to set aside the existing agreements of purchase . . . we still want to pursue that site but we are still dialoguing with Mr. Farhi about a pathway to see that happen. It is very much a priority project and we are working through some of the facts we now know about it.
“It’s not insurmountable, we’ve talked with our environmental consultants about getting the right equation to make all of that work. There is definitely a pathway, but it’s about being sensible about the whole thing.”
Graves stressed city council is interested in acquiring the property to continue with revitalization of the west end.

WORTH THE WAIT
Thanks to the crew at New Line Skateparks for allowing the T-J to tour the nearly completed Railway City Skatepark. In a word, it is breathtaking.

The Railway City Skatepark – located north of the Timken Centre – is well on its way to completion. Employees of New Line Skateparks are hoping to hand the $590,000 facility over to the city early next month. Bill Gurney, design manager at New Line, describes the skatepark as “a pretty substantial facility. It’s really roomy and spacious in its layout.” Ian

Most interesting are comments on our Facebook page from boarders who can’t wait to call it their second home.
Kim Anton writes, “Skate boarding is a sport. Keeps kids busy and out of trouble due to boredom. I think this park is amazing for all the kids and adults wanting somewhere safe to board.”
You can feel the excitement in this post from Brandon Hills, “I feel like a kid waiting for Christmas lol.”
And the same goes for Carlos Berry, “Looks like something out of a tony hawk or skate game, so sick.”
However, not sure excitement applies to this observation from Jaxson Somerville. “So now there will be no issues with kids in the community (loitering, vandalism, theft, bullying, etc.) since everyone’s excuse was always that we didn’t have a skatepark.”

Don’t worry he’s not throwing in the towel

Skating around the anger of boarding enthusiasts