A raft of announcements emanating from the latest Police Services Board meeting held mid-October, including Deputy Chief Jeff Driedger announcing his retirement, to take effect some time next year.
That triggered the board to approve the contract of Chris Herridge as new police chief, effective Jan. 1 of 2018 and running through to February of 2024.
In conjunction with that announcement, Insp. Marc Roskamp will become acting Deputy Chief, with no increase in salary until he officially assumes the role on April 1, 2018.
Staff Sgt. Scott Barnes is promoted to acting inspector effective Jan. 1 of next year with no increase in salary until he officially is promoted on April 1, 2018.
And, Const. Chris Johnson will be promoted to acting sergeant at the beginning of the new year, again with no increase in salary until he officially is promoted on April 1, 2018.
We talked at length with the new police chief on Friday as he assumes the leadership role vacated by former chief Darryl Pinnell.
Is it significant all of the personnel announcements, including his own promotion, were internal changes?
“I wholeheartedly support that,” stressed Herridge. “Obviously I’m a little biased because I’m from within. But when you notice people coming up through the ranks that have potential to be leaders and have leadership qualities, and you have invested in them and trained them, and then it comes to the point where you have an opening and why not. If you have the talent inside, stay inside. If you go outside, what message does that send to those who have been working all of their careers to reach some leadership positions?

“And there is a domino effect, too. If you promote from within, it filters down. There are so many positive impacts on an organization, as long as everything is going fine within the organization.”
The last point is critical in that the city’s fire service is undergoing the process of searching for a new chief and the possibility exists the individual selected may be from outside the department. There is the matter of dealing with an out-of-control overtime budget.
Herridge, who has been with the service since February of 1989, describes his leadership philosophy as open-minded.
“I want to create an atmosphere where everyone’s input is valued. We’re going to seek out opinion and make some decisions. But we’re going to involve our supervisory team, our middle managers. We send them the message and they are key because they send the message down to our front-line staff.
“But, they also receive information back from our front-line staff. And sometimes we may be a little removed and may not hear it at the top. So, our middle managers are key to the success of our organization. And I want to ensure we involve them in moving this organization as much ahead as possible.”
Herridge stresses the importance of community involvement, not only for himself but for all members of the force.

“I want to get out as much as possible, not only walking the beat and being involved in community events. But also to get out with our officers.
“As an example of that, Halloween night I went out on the front line with them. We got some chocolate and candies and drove to some of the subdivisions and walked around. The positive impact, you could feel it with the parents and kids. We had parents saying, ‘Hey this is great , when did the police start doing this.’ And the kids are high-fiving you and having a great time and the parents are allowing you to take pictures with their children.
“That’s what community engagement in small town policing is all about. You want the young kids to know we are here to help them. Yes, we have a job to do but when they need help, don’t be afraid to come looking to the police.”
Policing has changed dramatically over the course of Herridge’s career, and he recognizes the need to address the new priorities.
“Policing now – and I’m ballpark guessing – we’re dealing with 70 to 80 per cent of our calls are social issues. Mental health, youth, homelessness . . . you name it and we’re out there dealing with it. People, when they need help, we are the first responders and we are going to try and help them solve some of their problems.
“Mental health issues have risen and with this grant we received, we have a CMHA employee on site who started Oct. 10th. I’m reading her daily reports and it’s just amazing the impact she is already having out there.
“And, that’s the important part. We’re not trained mental health people. She can come along with us and provide those vital resources and follow up with people in St. Thomas who are suffering from mental health issues.”

Herridge points out training in recognition of the symptoms of mental health problems is a vital tool for all officers.
“As part of that grant request we made to have a CMHA employee here, we’re also going to train our officers in a two-day mental health/first aid course that I received myself two years ago at the hospital.
“It’s a very good course for dealing with people with mental health issues on the front line so officers can recognize the symptoms. To have that understanding that when you’re dealing with a person, there can be more in their background for them to be acting the way they are.”

As a short-term goal, Herridge places interaction with the community at the top of the list.
“We need to get out there and be involved in the community. And it starts with me, both on duty and off duty. I encourage the officers to get out of the car and take a minute and talk to people. Where the people are, at the arenas, at the parks and downtown.
“Interact with the public and get to know the public and get them to know us. If we can build those relationships, it makes it very positive. That also helps in building trust. And I always encourage our officers to treat people with dignity. That’s one of my priorities externally.”
Within the confines of their new police HQ, Herridge is cognizant of the importance of a positive working environment.
“Internally, we are very lucky in that Chief (Darryl) Pinnell has left us in pretty good shape with the new building, resources and our infrastructure is in pretty good shape. Our fleet is in great shape. “We need to work on the personal side of things, the human side. And create an atmosphere where everyone enjoys coming to work, they’re having fun here but also doing a great job for the citizens of St. Thomas.”
While keeping close tabs on the well-being of the women and men on the front line.
“We just got our wellness committee and our PTSD prevention plan in place, which really helps. Every now and then we’re going to come across an incident that can have an impact on police officers and everyone deals with things differently.
“I know our wellness committee has already been busy and put to use, so that helps keep our employees healthy, happy and at work.”
In closing, Herridge noted the downside to job promotions and the need to recognize some members of the force will not see their careers advance as hoped.
“It’s pleasurable when you notify someone they’ve been promoted, but there’s a downside to that. A number of people compete for those positions. They put in a lot of hard work and a lot of personal sacrifice both at work and at home with family and studying for exams. Then you have to let someone know they didn’t get the position but unfortunately there are only so many positions at any given time. Everything comes in time. Stay the course.”

Activity this week at the Sutherland Press building can only mean one thing. And no, owner David McGee has not begun remediation work on the structure. Instead, it’s the beginning of the end for the four-storey edifice that opened on Talbot Street in 1913. 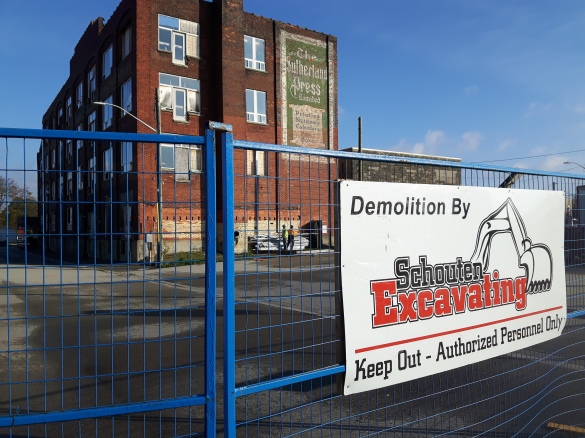 According to a release from city manager Wendell Graves, Schouten Excavating employees have begun preliminary work to temporarily secure some of the wall sections to avoid, as much as possible, a total collapse once the heavy equipment begins its work.
Actual demolition of the face of the building fronting on Talbot Street is to begin the week of Nov. 13, and this will require closing the eastbound lane of Talbot Street for some part of that week and the contractor may have to shut down all of the roadway for brief periods of time during this phase of the demolition.

During demolition, access to the Moore Street parking lot will be through the south entrance off Centre Street and the transit building will re-open as soon as demolition of the building has reached a safe height.
Graves anticipates demolition will be completed by the end of November with the site left “in a level condition.”
And then the guessing game begins all over.
What becomes of the vacant lot in a prime location downtown, directly across from the newly opened Veterans Memorial Garden?
It is too visible a site to let sit vacant for an extended period of time.

After ten years, the hostages are to be set free

WANTED: ONE ROADS SCHOLAR WITH A MINOR IN ANIMAL WELFARE

An intriguing Tweet on Friday from the city. It reads: “We’re recruiting for the position of Supervisor, Roads and Transportation (18 month contract).”
Isn’t that position currently occupied by David White?
Well, yes it is responded City Manager Wendell Graves on Friday.
“He’s on leave, so we just want to make sure we’ve got that back-filled with winter coming,” explained Graves.
“It’s just contract. We’re hoping he gets back here but we want to make sure bases are covered.”

A prudent move on the part of the city. It’s a demanding position, more so in the winter months and the pressure of keeping city roads and sidewalks in passable condition.
But it goes beyond that, added Graves.
“And there are other things on the horizon. Our transit contract is coming up. There are some significant files we have to keep moving on. So we need some assistance for a few months or however long it might be.”
Particularly the transit contract with provider Voyageur which is up for negotiation in 2018, although Graves believes there is an opportunity to extend it for three years. 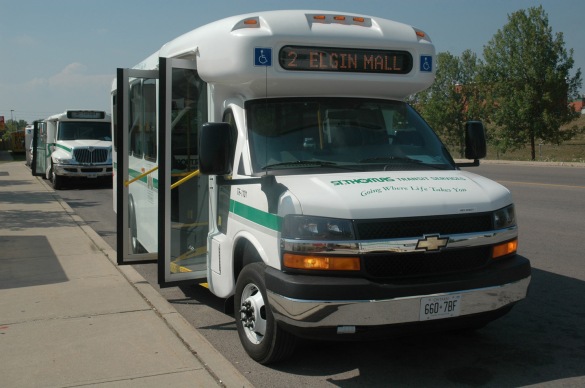 According to the job prospectus, the job in general entails supervising the-day-day roads and transportation service area including the following services: maintenance of all roadway surface works (winter maintenance, asphalt patching, sidewalk and bridge
maintenance), traffic sign replacement and maintenance, transit and paratransit services, crossing guard services, animal shelter, municipal bylaw officers, and the corporation’s fleet maintenance program.
Not difficult to imagine this would entail considerable job stress, especially with the animal shelter, which appears to be a rather contentious area of the job portfolio, based on staff demeanour at some of the recent animal welfare committee meetings.
Remuneration is in the $38 to $47 per hour range.

This year’s edition of Christmas Care launched Friday in its new home at 50 Harwill Road, off Burwell Road. To make it easier for those volunteering and individuals needing to register for food and toy hampers, St. Thomas Transit is temporarily adjusting Route 1 Northside. 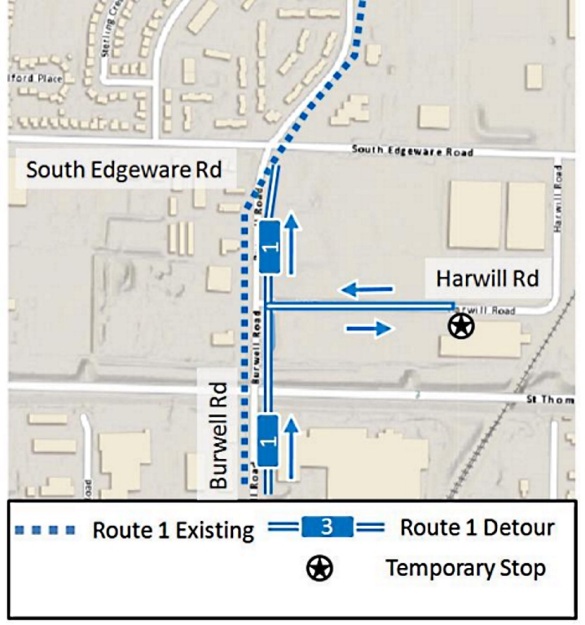 A temporary stop will be provided at the Harwill Road location effective Nov. 6th for approximately seven weeks. Minimal service impact is expected as there are no bus stop closures during this temporary detour.
Service is expected to return to regular routing after Dec. 22.