When completed, it will be a big box bonanza for St. Thomas and area shoppers.
Rock Developments of Tecumseh, Ontario is proposing to construct two, multi-unit retail buildings at the north end of the former Timken property on Talbot Street.
The structures would sit on the south side of the service road into the existing SmartCentre, opposite the Canadian Tire parking lot.
The subject land is six acres in size and would be severed from the approximately 20-acre footprint of the Timken plant. No firm plans have been announced for the southern portion of the property although it is likely to include some residential development.
Rock Developments’ client base includes Winners, Best Buy, Bouclair, The Brick, TD Canada Trust, Bank of Montreal, Staples, Boston Pizza, Rexall, Golf town, Shoppers Drug Mart and The Municipal Property Assessment Corporation (MPAC) among many others.

Initial clients in the proposed development include Winners and PetSmart with Mark’s scheduled to move from their existing location in the SmartCentre.

The first building – 12,400 sq. ft. in size – would consist of four units and be located just east of First Ave.
The second structure – 51,000 sq. ft. – is to be situated at the east side of the property, closest to the existing retail outlets. It will house three units.
The units will be linked via a series of pedestrian walkways and also a connection to the St. Thomas Transit bus stop. 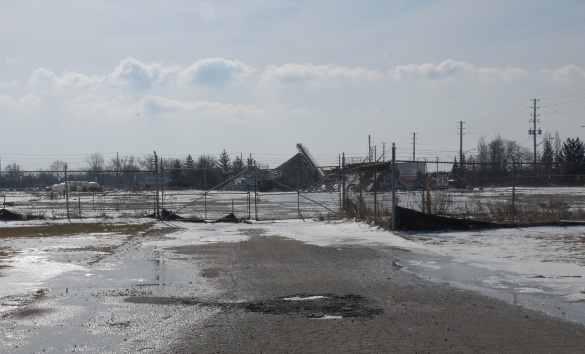 The site of the former Timken property looking south from Canadian Tire.

It is proposed to include bike racks in front of the buildings, “further encouraging active transportation to and from the subject lands,” according to Rock Development’s site plan.
Although only 325 parking spaces are required, a total of 336 spots will be provided, including 10 accessible parking spaces.
The site plan notes, “Landscaped traffic islands with tree plantings are proposed throughout the parking area, providing a buffer and opportunities for screening between the street, pedestrian walkways, and the surface parking lot.”

And, according to the site plan, “A patio is proposed in the front of the most westerly unit (Building 1), providing opportunities for pedestrian activity and activation of the streetscape.”
The city’s site plan control committee approved the proposal at its Feb. 14 meeting – subject to requirements – and it will likely come before council next month for consideration.
Rock Developments is hoping to begin construction this spring.

Hard to fathom city council would not be unanimous in directing staff to investigate a potential partnership with Aylmer on implementing a one-year pilot project to test a community alert/notification system.
As profiled last week, the Voyent Alert system – designed by ICEsoft Technologies of Calgary – would allow the city to provide residents with a variety of information including severe weather alerts; police, fire and EMS situations; evacuation or shelter-in-place updates; boil water advisories; road and school closures; and snow removal information to name just a few items.

The information can be provided through the download of a free app; text messaging; e-mail; or voice dial for landline phones.
Well, Coun. Lori Baldwin-Sands wasted no time pooh-pooing the concept, based on her web research.
Baldwin-Sands asserted acceptance of the system in the first year of operation in some municipalities was as low as 10 per cent.
Well, Lori, that’s not a fault of the system, that’s the municipality failing to
properly promote and market it.
As to having to hire a full-time staffer to operate the system, St. Thomas Fire Chief Bob Davidson torched that piece of research quickly.
Baldwin-Sands insisted on a cost comparison before warming up to the alert system.
Again, the fire chief threw water on the suggestion noting he had already undertaken such an exercise.
The city’s 2019 budget includes $12,000 for such a system which would allow up to 18,000 residents to utilize the technology. The cost is minimized through a proposed partnership with Aylmer and a pair of local industries – the Integrated Grain Processors Co-op ethanol plant and Air Liquide.
We vividly remember another instance of Baldwin-Sands’ research efforts back in March of 2014.
She Tweeted a new police station “could cost average taxpayer $150.00 per year for 10 yr.”
Ah, leave the research to those who are qualified, Lori.

“It is progressive and it uses technology. It’s well worth the attempt.”

Coun. Linda Stevenson wasn’t impressed with the notification system either, noting “other systems are already in place . . . I’m not sure it’s money well spent.”
The difference is, Linda, these would be local alerts, not on a provincial or national scale. Residents can opt in of their own volition.
Ironically, the debate followed on the heels of discussion around integrity of the city’s drinking water supply.
Coun. Mark Tinlin wondered should there be a problem with the water supply requiring a boil-water advisory or similar action, what is in place to advise residents?
Hmmm, wouldn’t something like the Voyent Alert system come in handy?
Detractors aside, there was plenty of support elsewhere on council.
“It is progressive and it uses technology,” praised Coun. Gary Clarke. “It’s well worth the attempt.”
“It’s a worthwhile endeavor,” added Coun. Mark Tinlin. “With a small investment.”
Coun. Jeff Kohler noted the importance of linking with residents and the “need to promote to residents.”
In the end, council voted 7-2 on the motion to investigate the potential for a partnership.

Last week we encouraged mayor and council to forget the nickel-and-dime stuff and delve into how much money St. Thomas Energy/Ascent may owe the city or what became of its long-term debt after the utility merger with Entegrus last year.
Particularly relevant now that the city is named in a $7.8 million lawsuit filed late last year by a numbered company, 1787868, operating as Focus Group based in London.
We suggested this might be a good project for new mayor Joe Preston.
Well, Joe, here’s a good starting point. See what is available on something called Project Bravo.
I’m sure the two current board members of Ascent Renewables Inc., city manager Wendell Graves and finance director David Aristone, would be able to provide some background.
Then perhaps you could enlighten us all.

City of St. Thomas named in $7.8 million lawsuit over decision to wind down Ascent Renewables

It’s point/counter-point this week on the proposed Alma College residential development.
Nancy Mayberry writes on Facebook, “Thank you Dawn (Doty) and Sue (Fortin-Smith). You are so right to fight for historical preservation and are to be commended for representing those who truly care about it. There is no excuse for the owners to allow the property to be so neglected when there are bylaws and minimum property standards they openly disobey.”
Putting forth a counter argument, Leo Anthony responds with, “In my opinion, these two women are interested in nothing more than obstruction of any development of that property for whatever reason they can dredge up. It appears they are satisfied with a large, overgrown, property, probably rife with rodents. Apparently, they want nothing to block their view. Nor do they want buildings shading the rays while they bask in the sun.”
As noted in a post earlier this week which can be found here, the framework of the heritage easement agreement will come before city council next month for approval before an application is then made to the Local Planning Appeal Tribunal for relief from the existing OMB order calling for replication of the front facade of the main college building as part of any development on the Moore Street property.

The State of the Municipalities luncheon is this Thursday (Feb. 28) from 11:30 a.m. to 1:30 p.m. at St. Anne’s Centre. The featured speakers are St. Thomas Mayor Joe Preston, Central Elgin Mayor Sally Martyn, and Southwold Mayor Grant Jones. Chamber of Commerce members can still register for tickets by calling 519-631-1981 or by email at mail@stthomaschamber.ca. We’ll have comments from all three mayors following the event.