The brain trust at city hall has opted to wait until they receive a police report before examining the crosswalk where Harold Leslie Hill was killed last month.
A wise move at first glance. Except our municipal officials, and those who sat on the previous council, are well aware of the dangerous situation created by the questionable status of these crosswalks.
In fact, this corner clearly remembers a council meeting several years ago when the mayor and alderman were apprised of the fact a similar crossing on Fairview Avenue, between Wellington and Talbot streets, was not properly signed as per provincial regulation.
The addition of a yellow “stick man” sign at the hospital crossing merely indicates pedestrians are in the area.
Environmental services director John Dewancker is correct when he asserts without the police report, we’re dealing with speculation. 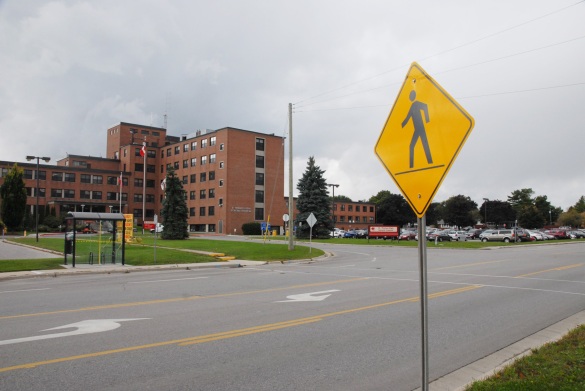 However the T-J has learned this is not the first serious incident at this particular location.
While the crossing itself is not likely the sole cause of the accident, motorists using Elm Street are fully aware it is all too easy to be blinded by the sun during the morning and afternoon drive.
Those two considerations should be impetus enough for the city to install properly-signed and lighted crosswalks.
If the municipality can’t afford to pay for the necessary upgrades, then immediately remove the painted lines at the many so-called crosswalks scattered throughout St. Thomas.
Stop creating a false sense of security for unwitting pedestrians who may not be packing a copy of the Highway Traffic Act in their back pocket.
GETTING AROUND TO IT
Last week in this corner, we documented the efforts of Joe Pollard and other parents to seek a resolution to what they consider an unsafe school bus situation at the corner of Wellington and Lydia streets.
To date they haven’t found a sympathetic ear at the London-centered school board or Southwestern Ontario Student Transportation Services, so Joe is taking his case to city council Tuesday evening.
What the parents are attempting to do is relocate a bus collection area in the middle of the above intersection to a pair of stops in far safer locales.
However, when there is a lack of will in all quarters, the wheels of change move slowly, if at all.
JUST TOO LOGICAL
St. Thomas trade association executive Serge Lavoie, in his spare time a driving force with the local chapter of the Architectural Conservancy of Ontario, passed along the following consideration in one of his tweets.
“Here’s a thought. Young Alma arsonists should serve community by doing heritage audit work. Maybe they’ll “get it.”
Better yet Serge, their 240 hours of community service should be spent in intimate contact with the grand old lady they wantonly torched — in other words, put the pair of teenage jokesters to work cleaning up the rubble strewn across the Moore Street property, as a result of their fascination with fire.
Since the pair exhibited little remorse in court on the day of their sentencing (one declined comment, the perpetrator mumbled a completely inaudible apology which Justice Ebbs had to repeat for all to hear), perhaps an extended period of time in close contact with the remains of the former school for girls might serve as a lesson in heritage appreciation.
Unfortunately the probation officers assigned to oversee the teens would likely see this as cruel and unusual punishment.
From the wheeling and dealing in the courtroom, the ability to attend to their social calendars and athletic endeavours appeared to be a higher priority than any form of restitution.
GET ON BOARD
After a credible showing this past May, Chris Vazquez alerted City Scope to the next meeting of the St. Thomas and London Commuter Rail Association, to be held 6:30 p.m. Tuesday at St. Thomas Public Library.
He and Donald Gordon, graduates of Central Elgin Collegiate Institute, are determined to get the wheels rolling on restoration of passenger train service between St. Thomas and London.
Tuesday’s public information session is being held to update interested parties in progress to date on achieving that goal. At that time they will also unveil their strategic plan covering the next five years.
Those in attendance will have the opportunity to become a member of the organization or sign up as a volunteer for their first fundraiser tagged for next spring.
With vestiges of our railway heritage in perilous decline, how refreshing to have bright, young minds eager to restore environmentally-friendly rail service between here and there.
For more info, visit http://www.commutebyrail.org.
QUOTE OF THE WEEK
“We’re caught between a rock and a hard place. Who is going to enforce this? I’m sure police have better things to do than going down to the park to get involved in a confrontation regarding someone smoking a cigarette.”
Ald. David Warden acknowledged Monday evening the city’s new bylaw restricting smoking in parks and playgrounds will be extremely difficult to enforce.
Which begs, the question — why does council continue to adopt such bylaws, unless it is to create the illusion of actually accomplishing something?

City Scope appears every Saturday in the Times-Journal. Questions and comments may be e-mailed to: mccallum@stthomastimesjournal.com.