A question for you: What is this city’s greatest export? Why, of course, shipping mayors off to China and Japan.
With no fanfare, Mayor Heather Jackson announced this past Wednesday at the State of the Municipalities luncheon she plans to join other representatives from the Southwestern Ontario Marketing Alliance in May for a trip to South Korea and Japan.
It’s a safe bet if you polled the aldermen at city hall they had not an inkling of this trip.
A trip that continues a tradition in St. Thomas dating back to 2006, when then Mayor Jeff Kohler winged his way to Japan.
That junket resulted in the first ripples of discontent amongst city ratepayers.
Reader Eric Swales fired off this comment to City Scope at the time: “Maybe the mayor can forget the trip to Japan and put the cost savings to some road or sidewalk upgrades instead. Isn’t that why we pay the Economic Development Corporation’s manager (Bob Wheeler) to go on these trips?”

Cliff Barwick embarked on back-to-back trips in 2009 and the following year. On his return from the latter, he served up one of the most memorable quotes of the year: “They’re very keen, very welcoming. They certainly knew all about St. Thomas. They knew how many Chinese restaurants we had.”
With an insight like that, how can you possibly deny the value of these mayoral meanderings.
For Mayor Jackson, the journey abroad in May will be her third in as many years.
In 2011, she stepped afoot in Japan and although she didn’t ink any contacts nor make any deals for area investment during the trip, she insisted at the time the payback on such trade missions often take years to materialize.
“Sometimes, it could take three years, it could take five years, it could take longer. You never know,” asserted Jackson.
You’re right, we may never know.
Last year, she directed her focus toward China for variety’s sake.
News of this latest venture has resulted in colourful dialogue on the T-J website and on Facebook.
‘Mademoiselle_HRC’, whose counter-ego must surely be ‘TheSotSays” wonders: “Have we ever seen a report anywhere totalling up the world junketing travel expenses for this woman. Since she seems to be right on top of the provisions of the Municipal Act, I wonder if she can show us the “foreign affairs” section of the “ACT” that allows her to stick me with the bill for her holidays.
“She’s been on three or four of these exotic globe-trotting safaris, ostensibly in search of jobs for St. Thomas. And how many jobs has she brought back ….. NONE. In fact since she started on this goofy malarkey we’ve done nothing but lose jobs; thousands of them.”
Well, looky here, the mayor has an answer to that challenge which she trotted out at Wednesday’s luncheon.
Mayor Jackson proffered finding the right business partners is like finding a life mate . . . it doesn’t often happen immediately and the trip is a way to foster relationships with Asian industry for future investment.
Surely other people out there see the irony in this.

ALONG THE SAME LINE
An obviously disgruntled reader passes along this observation.
“The mayor goes to luncheons meanwhile Zellers is closing in 3 weeks. 200 people will be out of work. She couldn’t attract new business if it slapped her in the mouth. Instead she parades around the city spending aimlessly and buying votes with sexy police stations.”
Do you get the sense there are more than a few frustrated ratepayers out there and they are getting cranky.

NEW BEST FRIENDS
A tip of the City Scope stetson this week to Ald. Mark Cosens, who passed along the photo of this city’s newest bosom buddies: Ald. Gord Campbell and St. Thomas entrepreneur Bob McCaig. 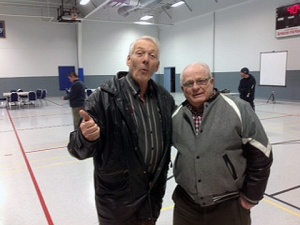 We don’t claim to be matchmakers, but this corner will gladly take credit as the mediator who urged them to put aside years of misunderstanding in order to spend their golden years together in peace and harmony.
Sure hope the bloom doesn’t quickly fall off the rose.

QUOTE OF THE WEEK
“I wonder if (Serge)Lavoie has a plan to defend a property on the proposed non-designated list should a property owner choose to demolish without approval. Alma College, a designated property, fell through the designation . . . good luck.”
Reader Jim Foster comments on the T-J website regarding Municipal Heritage Committee chairman Serge Lavoie’s move to establish a city register of non-designated properties – properties that are culturally significant but not officially designated under the Ontario Heritage Act.

City Scope appears Saturday in the Times-Journal. Questions and comments may be emailed to ian.mccallum@sunmedia.ca