There’s no doubt Jason McComb can be a thorn in the side of city administrators.
Not only is he an outspoken advocate for the homeless, he has taken it upon himself to patrol the downtown core in his solitary litter crusade – an undertaking that has put to shame the efforts of this city’s parks staff.
Well next Tuesday Jason is leaving town, if only temporarily.
That’s the day he begins his walk across the province to Ottawa to draw attention to the plight of the less fortunate in general and, in particular, those veterans who have been abandoned by the country they served.
He’ll put in 10- or 11-hour days trekking eastward with stops along the way, including Hamilton, in an effort to shatter the stigma of the homeless as panhandlers begging their way to the next bottle of cheap booze.
It’s a daunting undertaking at a time of year when the weather can be most unwelcoming.

“I’m going to rough it, like when I first became homeless,” Jason told us this week. “I didn’t know what to expect. It might be a little dangerous, but so was ending up homeless.” 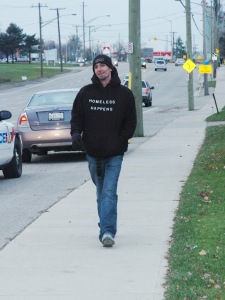 Jason McComb on his 2012 walk from St. Thomas city hall to its counterpart in London.

When he arrives in Ottawa, Jason aims to talk to anyone who will listen to his pitch on protecting society’s lost souls. And, we’ve just found out MP Joe Preston will hook up with Jason when he does arrive in the capital.
“Things like preventing homelessness among seniors. I look out for absolutely everybody. I love the push for affordable housing, but let’s take care of the current homeless . . . the here and now.”
You have to love Jason’s honesty, especially when prompted on the amount of support he is garnering locally.
“People are calling me nuts, but there are people who are supporting me in everything I do. People have bought me a pair of shoes, bags of socks, a coat and all of the essentials. The encouragement is there. It’s awesome.”
You can find out more and offer support – both moral and through tangible items – by visiting Jason’s Facebook page at HomelessHappensHelpingHands. He’ll also post updates over the course of his walk.
In a perfect world, Mayor Heather Jackson and CAO Wendell Graves would hook up with Jason on Tuesday and walk alongside him for a few blocks as a show of support.
He plans to sit on the steps of city hall around 8 a.m. Tuesday to lace up his walking shoes. He shouldn’t be hard to find.

LONG OVERDUE
The city has revamped its taxi bylaw to incorporate requirements under the Ontarians with Disabilities Act. The bylaw was approved at Monday’s meeting and here are the specific provisions that will apply.
A company that now provides an accessible taxi cannot charge any extra to have a person’s mobility device brought onboard.
A company that has an accessible taxi has to give priority for that cab to someone with a mobility disability. In other words, a person shouldn’t have to wait in queue because that cab is going to be dispatched to a regular call. The cab can’t knowingly be dispatched somewhere else if a disabled patron is waiting.
And finally, the taxi companies are responsible for properly training drivers of an accessible vehicle, most typically a van with a lift.

SHEER COINCIDENCE?
Does it seem odd the city is going to begin renovations on the old pavilion in Pinafore Park to restore it to its former glory as a dance hall now that Ald. Gord Campbell has had knee replacement surgery?

UP NEXT WEEK . . .
If you’re a member of the St. Thomas Thunder Ringette organization, you can be excused for feeling a second-class citizen.
As a Timken Centre tenant, you have rented space from the city for several years in order to store your equipment over the summer.
What the parks and rec department doesn’t tell you is the twin-pad facility has been experiencing humidity/condensation problems over the past few years and your bags of equipment are likely to morph into a moldy mess in the off-season.
Yet the hockey community housed at the Timken Centre has been apprised of the situation.
Try to obtain compensation for the $250 cleaning bill you were stuck with and see what sympathy you are afforded.
We’ll talk with Dwayne Foshay, St. Thomas Thunder Ringette president, about his disappointment after their request for reimbursement for damages was denied at Monday’s council meeting.

QUOTE OF THE WEEK
“I was the kind of guy who couldn’t win a free lunch.”
Gerald Simpson, the city’s newest millionaire, on his luck prior to a big Encore win on last Saturday’s Lotto 6/49 draw.
City Scope appears Saturday in the Times-Journal. Questions and comments may be emailed to ian.mccallum@sunmedia.ca.