It has been strangely quiet on the police headquarters front, albeit the petitions are still available to sign in city businesses and, no doubt, hundreds of individuals have registered their opposition to construction of a new police building.
Oddly, few if any of these ratepayers have attended the bi-weekly police building committee meetings at city hall, where both sides of the picture are being presented in a fashion that will allow an apples-to-apples cost comparison.
At the July 16 meeting, a representative from the Ventin Group confirmed a presentation will be made to council on Aug. 11 which will include the best estimate to date on the cost of a new police HQ adjacent to the Timken Centre.
Most revealing, however, was the update from Sean Panjer of SPH Engineering, which is in charge of detailing the cost of renovating the existing police station.

He stated his firm has identified “some potential difficulties with the mechanical system to meet (building) code requirements.” 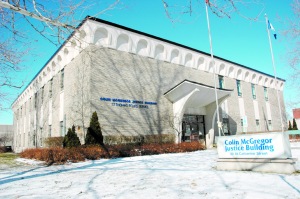 Panjer stressed the HVAC system will likely have to be replaced due to its age and the need to extend the life of the Colin McGregor Justice Building.
He concluded many items in the building will have to be replaced due to new energy and building codes. This is as a result of the scope of renovations that will ultimately be required.
The next meeting of the building committee is 9 a.m. Wednesday.
Will the public seating area house more than a lone reporter at that time?

MOVING FORWARD
Thanks are in order to Kristie Morgan — who operates a much-needed adult day nursery — for the invitation to join her and a couple of parents this past Wednesday as they huddled with city planning staff to move forward with a zoning amendment for her facility at 24 Elizabeth St.
Appreciation is also extended to Pat Keenan and Jim McCoomb in the planning department for allowing this reporter to join the meeting to get an understanding of what is required to allow Morgan to legally operate her Time For You 2 nursery.
The zoning amendment is necessary as the current residential designation does not permit a day care facility for adults with special needs. 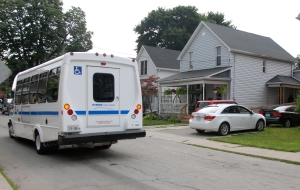 A St. Thomas paratransit bus stops in front of 24 Elizabeth St. In this case, the vehicle was there for no more than two minutes.

The sense after the hour-long session was of a positive nature. Staff in the planning department is certainly not throwing up roadblocks at this juncture and they stressed the need for Morgan to fully complete her application so they can forward a recommendation to council, likely in September.
Unless there is a major hitch, that report will likely give the green light to proceed with the needed zoning amendment and council will have the ultimate say.
In an election year, what elected official is going to stand in the way of parents who desperately depend on the respite afforded by Morgan’s adult day nursery.
The zoning amendment is merely the opening volley in a greater battle involving discrimination encountered on several levels by the parents of adults with developmental disabilities.
Whether it is the provincial government or neighbourhoods like Elizabeth St., action is needed and attitudes need to change.
Here is an excerpt from Susan Buro Hamm’s January 2014 presentation to the Parliamentary Select Committee regarding the lack of services for adults with developmental disabilities — adults like her 20-year-old daughter, Lexi.
“The first step into solving a problem is admitting it is broken. Services for adults with developmental disabilities do not exist. They are only empty words, and false information.
“You cannot misinform parents or consumers any longer. Admit there is a massive failure and start fixing it. It is only going to get worse in the years to come. Do not lay blame, do not analyze it. Fix it!
“We need rural solutions, not just urban solutions. In Elgin county, 10 years ago there was no wait list for a residential placement. Today, that list has grown to 114 people. We need local resolutions in our community such as housing, psychiatric services for dual diagnosis, crisis beds, and respite.
“We have health problems that develop from years of stress and crisis. We are aging and that in itself leads to health difficulties. We have government edicts that change with no thought or research into how those edicts affect our families in the long run. I am one of those parents who has laid awake at night, wondering if the next crisis will be the one to lead us down the path of abandonment.”
Time to abandon the NIMBYism, the hurtful names and bullying and recognize the system is broken.
And the first small step is encouraging caregivers like Buro Hamm and Morgan and embrace their efforts not hinder them.

IN THE RUNNING
With the nomination deadline for the 2014 municipal vote less than two months away, the field is pretty thin in both the mayoral and aldermanic races. Notably absent are current members of council seeking re-election.
Heather Jackson is the lone entry to date in the mayoral campaign.
Seeking an aldermanic seat are Jacque De Leebeeck, Rose Gibson, Todd Rowley, Joan Rymal, Linda Stevenson, Mark Tinlin and Steve Wookey. Tom Johnston is looking to maintain his place in the council chamber.

QUOTE OF THE WEEK
“I understand why families are forced to abandon their adult children. It’s not because they are cold or callous. It is because their hearts are broken, and their spirits are crushed, by years of traumas, crisis, endless paperwork, and meetings upon meetings with teachers, principals, doctors and specialists.”
St. Thomas resident Susan Buro Hamm in an excerpt from her January 2014 presentation to the Parliamentary Select Committee regarding the lack of services for adults with developmental disabilities.