Members of the city’s police and fire service account for an overwhelming majority of members in the Sunshine Club each year and 2014 was no exception.

Of the 96 city employees who earned greater than $100,000 last year, 81 work are based at the police station or fire halls.

This corner talked at length last week with Chief Darryl Pinnell who made it very clear, “A lot of it has to do with base salaries now. Things are getting up to the point where base salaries are getting close to that ($100,000) number.”

Likewise, we had a lengthy dialogue with Chief Rob Broadbent on the factors impacting the salaries of firefighters.

“If you look at the Sunshine List this year, you’re going to see a number of firefighters on it versus officers. It’s not uncommon for our officers to be there just by pay grids. Tack a few call-back fires or overtime shifts on top of an officer’s salary and it doesn’t take very much for them to bump over the $100,000 threshold.”

So, what would boost the number of firefighters included this past year?

“In 2014 we did have two significant shortages — two firefighters off for an extended period of time that we had to cover to maintain a minimum shift,” noted Broadbent. “Obviously a number of firefighters had to come in and that puts a number of them up.

“If you look at my budget, overtime was considerably higher than it was budgeted for but I have a minimum manning clause to maintain and that does cost money, especially if people are off for any reason.” 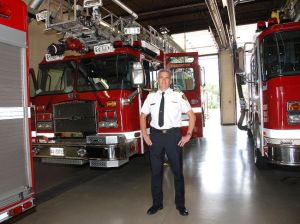 And that is key, maintaining a minimum number of bodies available for duty.

“I do think that needs to be remembered,” stressed Broadbent.

“These guys are coming back in on their off days — and let’s be honest they are being paid but they’re coming back on Saturdays, Sundays, nights and holidays to make sure we have minimum staffing.”

Still, many in the general population will continue to express annoyance at the swelling ranks of firefighters earning in excess of $100,000.

“They’re going to be annoyed if we don’t show up either,” Broadbent noted. “From my experience, somebody’s going to grumble, most people will not. Most people accept this is a necessary service and there is a cost to putting that service on the table.

“It’s not like we’re not doing whatever we can to control costs, but there are some costs that are somewhat out of our control.

“At five o’clock in the afternoon when Talbot St. was on fire, I’m not going to send everyone home because it was the end of the shift.” 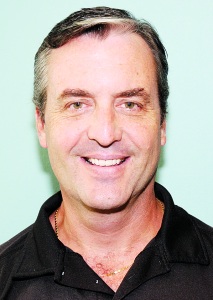 It seems like just yesterday when Jeff Kohler occupied the mayor’s office at city hall and following most council meetings he would huddle with then alderman Marie Turvey.

So it was with a sense of deja vu Monday evening we witnessed Kohler and Turvey on Talbot St. in front of city hall engaged in a lengthy discussion, no doubt comparing notes on the preceding council gathering.

Noted for her ability to micromanage — as per the McCarthy-Tetrault report of 2003 — no doubt the Central Elgin resident is now offering her services as a municipal consultant.

KNOW OF WHAT YOU SPEAK

Monday evening, Coun. Mark Burgess suffered the same fate as council mate Kohler when the veteran was ruled out of order last month on his motion to revisit renovations to the Colin McGregor Justice Building.

Burgess was cut off at the pass by Mayor Heather Jackson who ruled his motion to obtain a Class B estimate for renovating the existing police station did not jive with the city’s procedural bylaw.

Council subsequently supported her decision via a 5-2 vote — in essence an attempt by Kohler to undermine Jackson’s authority through a possible non-confidence vote.

Curious in all of this is the manner in which Burgess may very well unseat former alderman Mark Cosens as the master of the flip-flop.

Burgess campaigned on renovating the Colin McGregor Justice Building in lieu of constructing a new facility.

“I think the existing building could be renovated and it could serve us for many more years to come,” Burgess told the Times-Journal last fall.

“I don’t think it needs a full-blown, top-to-bottom renovation. I think we could put our heads together and come up with something a little bit suited to our needs and what we can afford to spend too.”

Yet in January he was in support of inclusion of a $13 million expenditure for construction of a new police facility in Part 1 of the 2015 capital budget.

And last month, backed a recommendation to proceed with a bylaw that would authorize borrowing up to $14.6 million for construction of a one-storey police headquarters on city-owned land adjacent to the Timken Centre.

Now assuming his true intention is to promote renovation over new construction, you would think Burgess would have undertaken some basic factfinding.

A little digging reveals he has not toured the existing police station nor has he engaged in any dialogue with Chief Pinnell or any other senior administrator in the service.

To our best recollection Burgess did not attend any meetings of the building committee — open to the public — tasked with comparing cost of renovation versus construction of a new station.

It all comes down to doing your homework and exercising caution when accepting advice/direction from some of your peers.

United Way board president James Todd at the launch Thursday of the Reimagine campaign which hopes to raise another $100,000 over the next 60 days to assist with a $160,000 shortfall in the current fundraising campaign.

City Scope appears Saturday in the Times-Journal. Questions and comments may be emailed to ian.mccallum@sunmdedia.ca.