After nine years of legal wrangling, a bevy of engineering reports, much dizzying debate over semantics and hair-splitting, we finally have a definitive answer from on high.
The Sutherland Press building is unsafe. That’s the determination of Justice Peter Hockin handed down this week along with confirmation building orders issued in 2015 and 2016 have been confirmed as valid.
All right, but now what?
City manager Wendell Graves advised the next step for the city is consultation with legal counsel John Sanders, but “In the absence of any action by the owner, the city will want to make the area safe again as soon as possible.”
Is it really the beginning of the end for the four-storey structure that dates back to 1913?
There are still too many loose ends, declared Valerie M’Garry, lawyer for building owner David McGee. 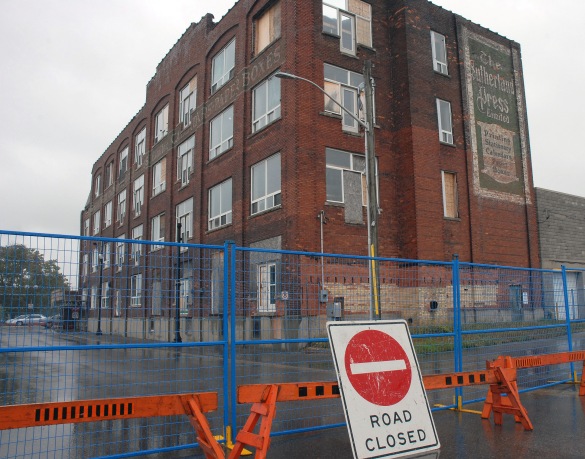 The work orders may be valid, she conceded, but “The compliance date has passed and I think the municipality has to consider its position,” she told City Scope on Thursday. “Do they have to issue new unsafe orders? Or do the ones they issue stand and they’re just out of time and they can proceed (with demolition) immediately? I suspect they will take the latter position.”
As indicated by M’Garry at the two-day hearing that wrapped up June 2 at the Elgin County Courthouse, McGee now has some funding in place and “we could start work in a couple of weeks . . . $50,000 has been put in my trust account. Mr. McGee is finally in a position to do something.”
“We’re optimistic of approaching the municipality and saying here’s a proposal for you, let’s move forward rather than spending time on appeals and things like that,” continued M’Garry. “At the end of the day they (the city) may get what they want, at the end of the day we may get what we want. But let’s talk about what we both supposedly want at this point and see if we can’t move it forward. For the first time in a while, Mr. McGee does have some money at his disposal. But he has to be able to apply it judiciously and have some faith he doesn’t put it into a building that’s going to be a pile of rubble two days later.”
McGee’s brighter financial picture failed to move Hockin.
“I’m paying no attention to Mr. McGee’s financial position today,” remarked an unimpressed Hockin, who later added, “I suppose if you had unlimited funds it could be fixed up . . . the court costs may have exceeded the costs of repair.” 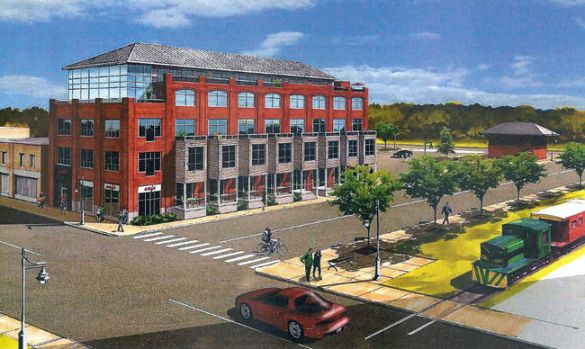 A conceptual drawing of what the Sutherland Press building might possibly look like if successfully converted into a condominium development.

So, instead of sitting side by side in a courtroom, it’s time to face each at the table and engage in discussion with the city, stressed M’Garry.
“Mr. McGee has been optimistic of a number of things over the years but unable to make them come to fruition. He is in a position now to do some concrete things. Will it be enough to make them (the city) gives us pause and an opportunity to move forward? That we have yet to explore.
“I do know the focus is going to be on trying to see if there isn’t something we can sort out with the municipality.”
One bone of contention, M’Garry pointed out, is the matter of tax arrears.
“The city has put $60,000 on the tax rolls and a lot of that is for legal fees for the court of appeal lawyers (for the appeal tribunal who hadn’t even argued the case at that point. So, it’s like giving them (the city) carte blanche to just keep adding money on that tax bill and I don’t think that’s what building code legislation intended. So, there are things like that we need to discuss with the city and say truly there is some middle ground here. Yes, some of your expenses are legit, but we have some issues with some of the others.”
A critical admittance by Sanders at the first day of the hearing bears revisiting.
“The city never said the only solution was demolition . . . we did not rule out remediation.”
And M’Garry seized upon that.
“. . . and I’m not persuaded by the course of conduct in these proceedings that it’s even their preferred option,” she speculated.
As to what may possibly lie ahead for the Sutherland Press building, M’Garry referenced an undertaking in the city’s west end with the Victoria Building at 180 Talbot Street.
“There’s a similar building at the other end of the city that has been done. And this would be a nice kind of bookend to the main drag if we can just . . . find some common ground to move forward. 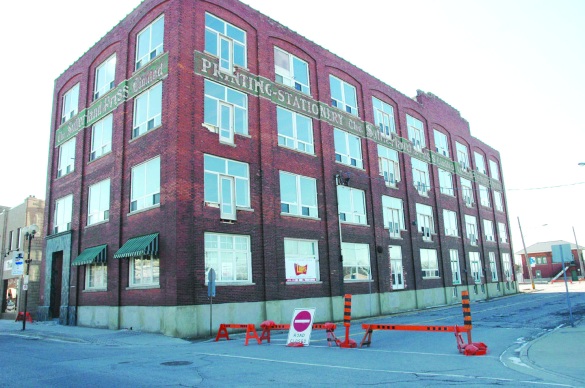 “I think there’s an onus on both parties. We have to pony up and they have to be willing to listen. Both parties have to be willing to come to the dance. And we can do some things that will assuage the city’s concerns and ultimately be to the advantage of the building.
“If we go to the chief building official and say we don’t want to finish the shoring, as it was originally designed, what we want to do is do something different and it will take a different time frame. We hope the city would be receptive to that.”
McGee does have a 30-day period in which to launch an appeal, however M’Garry alluded to the benefits of face-to-face discussion in lieu of more time spent in the Elgin County Courthouse.
“I imagine there will be a certain amount of behind-the-scenes discussion taking place in the coming days that we won’t be privy to share. But we are optimistic we will be able to have those discussions.”
Hope remains the hostage taking may soon come to an end.

Thirty days and counting in the Sutherland Saga

‘It just sits there.’ Is the Sutherland Press building a monument to something or an over-sized bird house?

Sutherland Saga: ‘The court costs may have exceeded the costs of repair’

HEY PREMIER, LEAVE THOSE SCHOOLS ALONE
Kathleen Wynne’s Liberal government has announced it intends to place a moratorium on future school closures until a review of the process is complete. That prompted the following response this week from Elgin-Middlesex-London MPP Jeff Yurek.
“The Minister of Education has admitted that her government’s existing accommodation review process is flawed weeks after the Thames Valley District School Board (TVDSB) made the decision to close 3 schools in Elgin County. 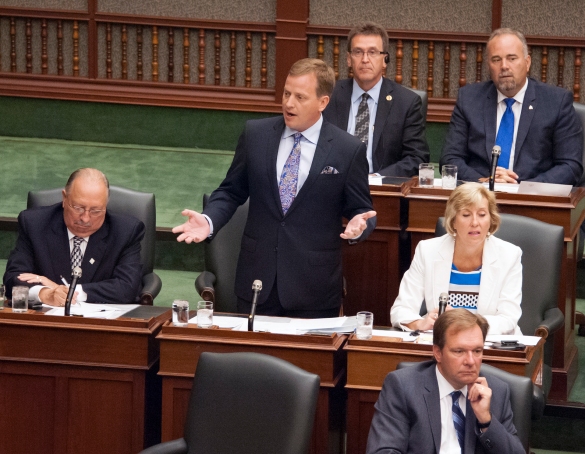 “While our community looks forward to the new school in Belmont and accepts the closures of South Dorchester and Westminster, I urge the TVDSB to revisit their decision to close Sparta, Springfield and New Sarum. The closures of these 3 schools should not go forward until the government corrects the funding formula for rural schools and a new accommodation review process is in place
“It is unfortunate that the Minister of Education ignored the voices of parents and the impact of communities while allowing this flawed process to proceed.
“I will work to ensure that the review announced by the Minister will include the reinstatement of funding for rural schools and that impacts to communities are considered during the accommodation review process.
“This is the right thing to do for our children, our parents and our community.”

Of Mark Twain and the London-centred school board

IT HASN’T TAKEN ROOT
On May 15, city council gave the green light to proceed with the Moore Food Garden, proposed for the west end of the Moore Street parking lot, adjacent to the BX Tower. It is a partnership between Elgin St. Thomas Public Health and Destination Church designed to assist those in the community struggling with food poverty. 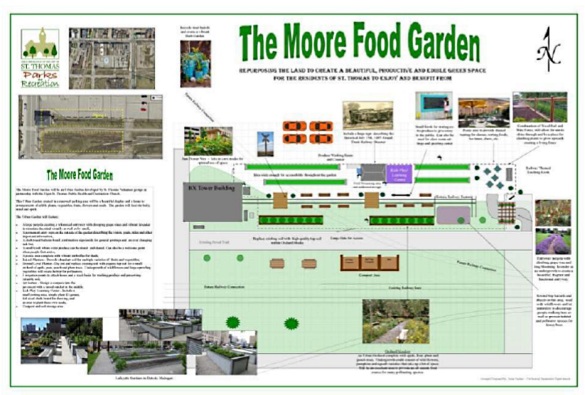 The hope was to begin the container garden this growing season but the only sign of growth is the appearance of painted markers on the pavement outlining the location.
And now we hear of a plan to link the London & Port Stanley railway with the former Canada Southern line by laying a curved stretch of track that would lop off the west end of the garden.
Are council and staff aware of this proposal and is it likely to be completed any time in the near future?

STILL TALKING?
How are the contract talks between the city and the firefighters’ union proceeding or are they likely to head to arbitration? Sure would like to hear about the benefits of 24-hour shifts, reportedly a key bargaining issue.

Retirement payouts to firefighters enough to make you sick

COMING UP IN THIS CORNER

Work should begin in the coming days on creation of the Veterans Memorial Garden in the parkette opposite the BX Tower at Moore Street. This  according to Tony Bendel of Lord Elgin Branch 41, Royal Canadian Legion. We’ll talk to him about the look of the garden and a dedication ceremony planned for October.

And, she won out over 11 other candidates for the job of director at Ontario Works in February of 2011 and her name is still listed on the staff directory at city hall. So where is Barbara Arbuckle? People would like to know.