While this country’s passenger train network has been picked clean to the bone like so much road kill, Toronto transportation writer and policy adviser Greg Gormick notes it is no coincidence the topic of rail travel ebbs and flows with the election tide.
His clients have included CP, CN, VIA and numerous elected officials and government transportation agencies.
One of his latest undertakings has him consulting for Oxford County to document concerns about the province’s high-speed rail (HSR) proposal linking Toronto with London and eventually Windsor.
Gormick warns HSR will further contribute to the decline of VIA passenger rail service to Woodstock, Ingersoll, Brantford, Stratford, St. Marys and other communities in the region.
Gormick points out no projects similar to the Wynne government’s HSR proposal exist worldwide and the plan appears to be constantly evolving. He calls it a “moving target.”

Instead, Gormick is promoting an alternate concept known as
high-performance rail (HPR). This would build on conventional rail service by upgrading and expanding shared passenger and freight lines and investing in modern cars and locomotives.
An advantage of HPR is that it isn’t a “big bang” approach taking years to deliver any benefits before the entire project is completed.
For HPR to be successful, it will require a feeder bus service linking off-rail communities to the network.
He is quite outspoken about the absence of any intercity bus service to St. Thomas.
“In terms of St. Thomas, can we get some decent bus service,” Gormick ponders. “How about linking St. Thomas with both London and maybe Ingersoll and Woodstock. That would be a good first step. And where you’ve got the railway lines, maybe way off in the future you could be looking at a feeder rail service using modern diesel multiple units (like those used on the Union-Pearson Express). Say over Jeff (Willsie’s Ontario Southland Railway) from St. Thomas to Ingersoll and Woodstock as a feeder to a high-performance rail system.
“It’s 20 miles to London and we can’t even get a bus running there,” continues Gormick.
“And it all comes back to the provincial government. They say they’re going to fix this by changing the bus regulations. As if the bus companies are going to say, ‘Oh, now you’ve changed the regulations, we’ll flood the market with service.’
“The province and the feds don’t want to face a simple fact. If you want this service . . . there are many programs in the United States – you only have to go over to Michigan – to see what they’ve done to keep their intercity bus service going. They haven’t broken the bank, but it maintains service to these points that will never have rail service again. Sometimes because the rails are gone. But they have done it at low cost and it keeps these places plugged in. That’s what we need.”
Will HSR be a reality any time soon?
Highly unlikely, predicted Gormick in a Toronto Star interview this summer.
“At election time, HSR is to politicians what cat nip is to felines and they go wild for it.”

Who suffers when you can’t get there from here?

The Sutherland Press building is quickly being reduced to rubble. As of mid-November, the structure was nearly level with the adjacent transit building on Talbot Street. 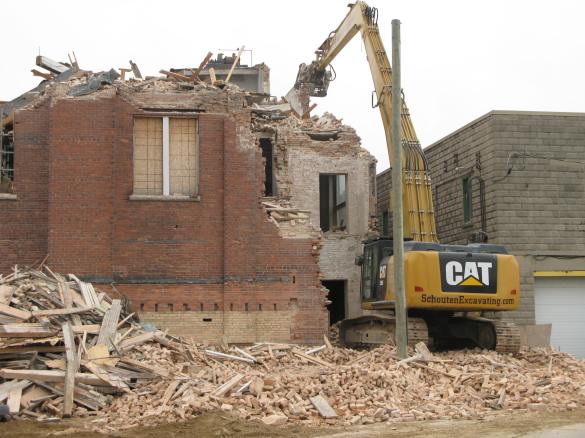 Clearly visible is the shoring securing the southwest corner of the building from collapse.

Taking in demolition of the building dating back to 1913 is proving a popular spectator sport, with great viewing opportunities.

THE SAME LOGIC DOES NOT APPLY

The Nov. 4 interview with new Police Chief Chris Herridge generated numerous comments on social media praising the city for hiring from within to replace retiring chief Darryl Pinnell.
In that conversation, Herridge correctly stressed, ” If you have the talent inside, stay inside. If you go outside, what message does that send to those who have been working all of their careers to reach some leadership positions?”

That sentiment prompted a series of Tweets promoting the same general idea: “A strong positive message to all who work hard throughout their careers that they have a chance for the top. Hope @cityofstthomas follows same logic and hires new fire chief internally.”
No, let’s hope the city’s hiring team absolutely does not follow that logic if it has any regard for ratepayers.
If you carefully digest all of the comments from the police chief, he also added, “If you promote from within, it filters down. There are so many positive impacts on an organization, as long as everything is going fine within the organization.”
On track to dole out close to a million dollars in overtime last year and in 2017, things are far from fine within the organization.
Perhaps somewhere down the line, a new chief can be promoted from within, but for now the priority is hiring an individual who can knock down the out-of-control overtime budget.
Keep in mind results released last month from the city’s online budget survey revealed the fire department was one area residents would like to see the spending pared back.
There was a spate of negative comments, of which this is typical.
“Fire services are a critical service but I believe we are not paying close enough attention to where the money is going to run the fire dept.”
Clearly, we can’t afford to maintain the status quo.

Overtime and lawyers exact a price on city budget

Another twist in the what-do-we-do-with-the-animal-shelter debate.
The city had sought to undertake much-needed upgrades to the Burwell Road facility, however the lowest tender came in about $60,000 over budget.
Council agreed the project should be parked for the time being.
Well, Monday’s agenda includes a report from Peter Kavcic, in capital works, advising staff have unearthed a Green Municipal Fund grant from Federation of Canadian Municipalities that would cover 50% of the cost to undertake a feasibility study as well as 50% of the construction expenses of a pilot project for a net-zero energy building.
The report goes on to indicate, “The new building could offer features like a long design life with energy-efficient strategies such as solar electrical generation, water conservation, geothermal heat pump with in-floor heating system, energy storage, as well as an electric animal control vehicle with car charger. The building would generate more energy than it uses so would be a net supplier of energy.”
The cost of a feasibility study is in the range of $10,000 to $25,000.
The aim would be to relocate the shelter from its current site.
As added incentive, Doug Tarry Limited is offering to act as an advisor to the city for the feasibility study.
The report concludes, “The first city net zero demonstration building provides short-term benefit from energy and fuel savings as well as long-term community benefit by inspiring more efficient buildings.
The big question mark is whether the grant application is accepted.
But certainly, full credit for thinking outside the box.

Mergers are all about creating efficiencies, so who will be left at the alter in health unit marriage?