Low-income families, young people, seniors and those with disabilities are the most disadvantaged when a rural area does not have access to good public transportation.
That was the message Thursday (March 23) at a rural public workshop hosted by Elgin St. Thomas Public Health and  attended by close to 30 participants.
The aim of the three-hour forum was to get the ball rolling on development of a community transportation system for St. Thomas and Elgin county.
Opening speaker Dr. Joyce Locke, the area’s medical officer of health, noted 35 per cent of Elgin’s population lives in rural areas, with personal vehicles being the most popular form of transportation.
In fact, advised Locke, 86 per cent of those living in St. Thomas/Elgin drive to work, with the average annual cost of operating a vehicle running in the neighbourhood of $7,300.
As a result, it is difficult to have a job without a vehicle in rural areas. Likewise, without a vehicle, many residents have to carefully plan trips in order to purchase day-to-day essentials, often relying on relatives, friends and neighbours to assist.
Locke added 13 per cent of Elgin’s population is comprised of children and youth. With no access to public transportation, it is one of the top reasons young people can’t find work.
As Locke and all of the speakers stressed, the lack of reliable public transportation is not unique to St. Thomas and Elgin, it is a concern shared by municipalities across the province.
You begin to address rural transportation issues by building on existing transportation, which can include options provided by social service agencies and long-term care facilities, shuttle services operated by employers, school bus operations and rides provided by health agencies, along with active forms of transportation including walking and cycling.
In the case of the latter, Locke said there is a need to explore cycling routes between St. Thomas and London and promote connectivity, as is the case with the South Park Trail project in St. Thomas. 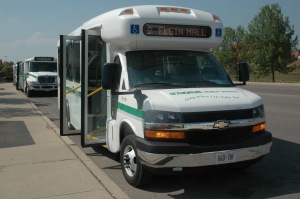 An example of creative strategies was presented by Heather Sheridan, employment and income support supervisor with St. Thomas Elgin Social Services, who highlighted the St. Thomas bus pass pilot project launched in February.
Approximately 125 participants – employable and active Ontario Works participants – will benefit from obtaining vouchers to receive monthly bus passes to assist them not only with employment opportunities, but also to improve their overall quality of life.
If the nine-month pilot project proves successful, the aim is to expand the program.
Brad Smith, public transportation and business development coordinator with Norfolk County, introduced and outlined the success of Ride Norfolk, a bus service that links outying communities such as Delhi, Waterford and Port Dover, with Simcoe five days a week. In between trips, the bus runs a loop service throughout Simcoe.

In a county not unlike Elgin, 47 per cent of the users ride the bus to get to and from work.
Initially launched as a social service, the bus is now primarily used for employment, medical appointments, visiting family and friends and shopping trips.
Ridership has grown from 3,500 to 9,000 per year.
And as Smith and Lisa Tolentino, consultant with Ontario Healthy Communities Coalition stressed, transportation is an investment not a subsidy.
Tolentino noted the questions most often posed to area realtors revolved around access to health care, education facilities and transportation.
Focussing specifically on St. Thomas and Elgin, there is a need to zero in on an integrated, multi-modal service that includes traditional transit, taxis, car pooling and car sharing, walking and cycling.
After breaking out into smaller work groups Alan Smith, manager of economic development and tourism for Elgin county, advised he is looking at the possibility of a bus service linking Port Stanley, Sparta and St. Thomas, with demand driven by tourism.
A service that could be expanded to include other centres such as Port Burwell.
Another initiative, suggested Smith, is the introduction of bike rental outlets and bike sharing in Port Stanley as the county continues its push on tourism “big time.” 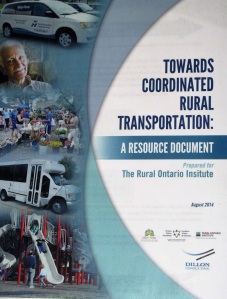 Approached to participate in a regional ride-sharing program, Smith noted the county declined due to liability issues.
As addressed in Towards Coordinated Rural Transportation, a resource document prepared for The Rural Ontario Institute, “For rural residents without access to private automobiles, access to employment, education, healthcare and goods and services is a significant barrier and an impediment to remaining active members of the community.”
Related posts:
Roundtable on rural poverty: Is the province out of touch?
South Path: paving the way to a more connected tomorrow in St. Thomas
STAYING THE COURSE WITH ALMA
The new owner of the Alma College property is taking a slow and cautious approach to long-term development of the 11-acre Moore Street site.
London developer Gino Reale acquired the property one year ago this month and in that time he has almost entirely rid the site of mountains of rubble, the last remnants of the former school for girls. 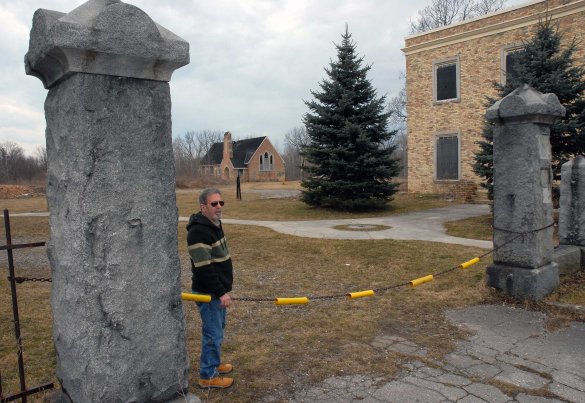 While little has transpired over the winter, behind the scenes work is progressing on completion of the environmental assessment required by the province.

In addition, Reale admits “We’re trying to get our head around what we want to do. Things aren’t stagnant.”
While the property is zoned for high-rise development, that’s not necessarily the route Reale seeks to pursue.
“The start would be to get a plan that everybody’s happy with and then start implementing it,” Reale told City Scope on Friday. “There should be a clear direction by July because there are a number of people who are pushing . . . and I’m pushing back a little bit. It’s not about money. . . . I’m avoiding somebody coming on and taking it and making it not what I see it being . . . I want something that people will talk about this property in a positive way.”
As a side project, Reale would like so sit down with city officials to discuss the possibility of the municipality taking over the former amphitheatre in the ravine at the east end of the site. 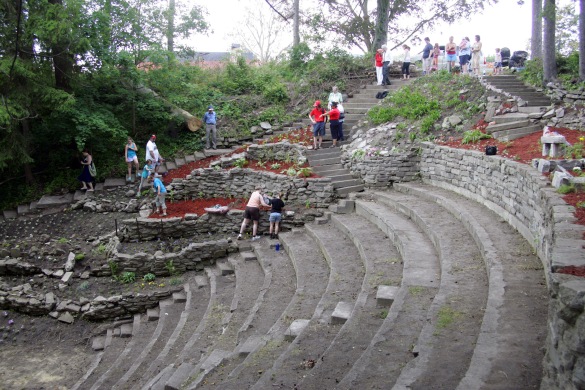 Alma College alumnae visited the amphitheatre in 2009. Jackie Piche and a team of volunteers began refurbishing the site shortly before when she discovered it had been completely grown over with weeds. Alma College graduation ceremonies and theatrical production used to take place in the amphitheatre.

We asked Reale about severing off portions of the property to involve other developers.

“That’s one of the things that has been discussed quite a bit. That would give the front portion (three acres) where the school was some life. And then we would keep the back five or six acres as a more long-term development. But I don’t want to do that and lose sight of what we want to do in the back.
Reale added, “Maybe we should put a townhouse development back their, like a freehold. Like a gated community. Then we can take a year or two or three years and rezone it. because we’ve got something going on in the front.”
He returns, however, to the necessity of drafting up a master plan.
“I’m cautioning everybody. I would rather have a master plan . . . and I would like to be involved with what’s going on in the front. But if we’re not involved, I want the people who are to understand what is coming in behind them.”
Reale did note there has been some interest in, and discussion about, locating a retirement facility of some description on the expansive property.
Related posts:
A little good news on the Alma College front
Alma College sold to London developer
HAP DAY CELEBRATION
The Toronto Maple Leafs plan to recognize 19 former players, one of whom is Clarence (Hap) Day who enjoyed a 33-year career in the NHL as a player, referee and in the front office, 28 of those with the Leafs. His name is engraved on the Stanley Cup seven times, the last in 1951 as assistant manager in Toronto. 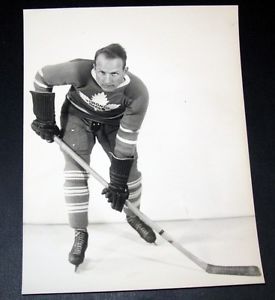 After departing the Leaf organization, Day purchased Elgin Handles, formerly located on Kains Street. He sold the operation to his son in 1977.
Hap Day died 27 years ago last month at his St. Thomas home. He was 88 years old.
A ceremony welcoming the commemorative banner to St. Thomas begins 1 p.m. this Sunday, March 26 at the Jumbo monument.
From 2 – 4 p.m. there will be a free public skate at the Timken Centre where participants are encouraged to wear your blue and white gear. During that time slot, there will be a Wall of Fame ceremony with the Day family, the voice of the Leafs Joe Bowen and former Leaf Al Iafrate.
BREAKING BREAD
Thanks are in order to Malcolm Rust and members of the Rotary Club of St. Thomas for an enjoyable luncheon speaking engagement this past Monday at the Wayside in Talbotville. An honour indeed to address these hard-working community boosters responsible for the Christmas Tour of Homes, the Rotary Music Festival, the Service Above Self Awards for high school students and so many other worthwhile projects.
They came prepped with an appetite for great food and an endless buffet of thought-provoking, media-related questions.
An inspiring two-way dialogue that concluded much too quickly.
THE WEEK AHEAD 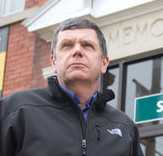 QUOTE OF THE WEEK
“We have said to the province, this project is still early, there is no construction and we know buried in the contract there is a buy-out. If you’re going to make the tough decision and do it now, it will be a pretty cheap alternative than paying these exorbitant rates over the next 20 years.”
Dutton Dunwich Mayor Cameron McWilliam speaking to City Scope at a public open house Thursday (March 23) in Dutton to gather feedback from residents about the Strong Breeze Wind Project proposed for that municipality.