Time spent at a coroner’s inquest brings with it the emotion of family members and friends sitting through graphic testimony in the courtroom interspersed with details of protocol, procedures and guidelines that seem, at times, almost callous in nature.
Such was the case this past week with the four-day inquest into the death of St. Thomas construction worker Brian Daniel, killed on July 2,1014 when he was struck by a pick-up truck on the Highway 3 bypass at the Burwell Road bridge.
The recommendations – excellent in scope and most of them put forward by Daniel’s daughter Krista McColl – can be found here.
But to better understand the context of the back-and-forth testimony heard throughout the inquest, here are snippets of what was presented to the five-person jury.Filomena Savoia, retired from the Ministry of Labour, presented some startling statistics.
Over a 10-year period ending in 2016, there were 511 workplace fatalities, 185 of those in construction.
Daniel’s death was the fourth road worker killed in 2014/15.
Those four deaths brought about no legislative changes.
It was disclosed that the Ministry of Labour does not generally interfere with other ministries. 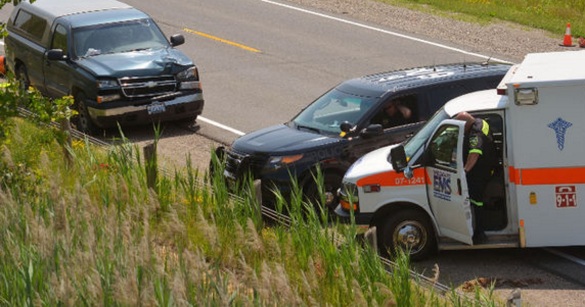 James Mercer, a fellow Facca Construction employee, stood with Daniel just minutes before he was struck from behind and killed.
Mercer said he performed CPR on his co-worker until paramedics arrived.
He was so impacted by the death of Daniel that he left the job site to work on another project in Kitchener.
What’s it like to be a flag person or traffic control person?
“Drivers couldn’t care less about us,” admitted Mercer. “It’s the worst job. I’ve been yelled at and people throw stuff at us.”
Mercer added, “A police presence or photo radar (on road construction sites)? I would strongly push for that.”
Benjamin Dickout of Malahide, driver of the pick-up, was driving just below the posted speed limit (verified by the OPP) when he struck Daniel.
“On this day I didn’t see the construction work and my passenger didn’t notice either, as far as I know. I would have slowed up if I saw Mr. Daniel.”
Const. Sue Blacklock, an OPP traffic specialist who has investigated more than 500 collisions, confirmed Dickout’s speed was 78 km/h.
“I don’t know why he didn’t see the flag man, he was wearing a shirt with reflective material.”
The cause of Daniel’s death was determined as multiple trauma.
Joshua Stewart with the Labourers’ International Union of North America, LIUNA, answering a question from Daniel’s daughter as to why he was standing on the roadway at the time of the accident, said “It is common practice to enter the roadway, it’s a long day on the job, flag men move around.”

Could Daniel have been on the roadway to further protect his fellow workers from oncoming traffic?
Jonathan Wilson of the Ministry of Transportation attempted to explain why a speed reduction at the site was not granted to Facca Construction, even though a reduction had been in place the previous year on different locations of the Highway 3 bypass.
It was Wilson’s contention “motorists do not observe speed reduction signage, it’s an inconvenience to the travelling public . . . a difference of 20 km/h (the speed reduction) is unlikely to make a difference.”
The decision not to put into place a speed reduction was based on regulations, added Wilson.
When Facca Construction asked for a reconsideration, the firm was told that would only happen if the speed limit was 90 km/h on the bypass.
Wilson was unsure if Facca would have been permitted to erect speed advisory signs on its own.
Ronald Lewis, an MTO traffic supervisor since 2001, said Facca was responsible for filing a traffic control plan with the ministry.
“The plan should be consistent, uniform and minimize disruption to traffic flow.”
Nothing there about protecting workers on the site, as was noted by LIUNA legal counsel Sean McFarling, who added “the speed was in fact reduced after Daniels death, did that motivate the decision? Is that a good way to prevent tragedies?”

As to deviating from MTO guidelines regarding speed zones, David McCaskill, legal counsel for the Ministry of Labour, referred to Table 1 of Book 7 of the Ontario Traffic Manual Book.
“There is a real discouragement for deviating from guidelines. It’s a pretty daunting process to deviate from Table 1. It’s Draconian language, you better not deviate or you’ve got some explaining to do. What in Table 1 applies to this project? . . . But someone made the decision (to initiate a speed reduction) after Mr. Daniels was killed.”
Mike Ifabumuyi, the Facca Construction project manager at the Burwell Road bridge, documented his correspondence with the MTO in an attempt to institute a speed reduction zone on the bypass.
“Flagging is the safest method of traffic control, based on years of experience and we had flagging on Season 1 (in 2013 on the other bypass projects) and it was extremely effective.
When the MTO turned down the final request, Ifabumuyi responded “We recognized that was current policy, but we disagreed. Worker safety should have taken priority over policy.”
Probably the key takeaway from this inquest.
And the final witness, Ken Wootton who is with the Ministry of Labour and conceded with hundreds of projects under his jurisdiction, it is unlikely he can visit each one, including the St. Thomas undertaking.
“Facca had other options beside the speed reduction . . . flag men are legally able to work in an 80-km/h zone.”
Comforting to know you are legally correct when standing just metres from traffic speeding past you all day.
The other key takeaway from the Daniel’s inquest? The unmistakable feeling two provincial ministries are protecting their collective butts as they preside over guidelines and legislation totally unsuited to the work being undertaken July 2, 2014, the day Krista McColl’s father – someone she lovingly referred to as ‘Grumpy Panda’ – was needlessly struck and killed.
One can only pray the 13 recommendations emanating from the inquest are adopted by the province.
Unlikely any time soon with a trip to the polls on the horizon.

Jury recommendations from the coroner’s inquest into the death of St. Thomas resident Brian Daniel

SOME PAINT WITH THAT SOUP?

On a visit to Walnut Manor in mid-January, apart from a feeling of total desperation and viewing the unimaginative and uninspiring menu, what stood out was the swath of peeling paint in the miniscule kitchen and the basement that could easily stand in as a horror movie set.
Well, seems someone else concurred and recently contacted the health unit with their concerns. 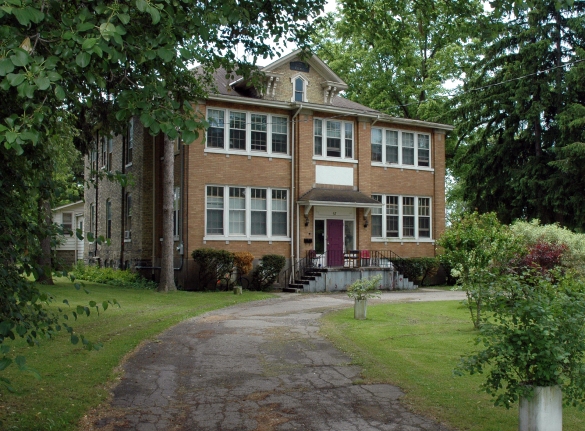 In a conversation this week with Cathie Walker, director of health protection at Elgin St. Thomas Public Health, she confirmed the home – operated by Niagara Supportive Living of Welland – underwent another inspection on Feb. 5.
“We were alerted by a member of the public that there were some concerns so the inspector went over there for a complaints-based investigation,” advised Walker.
As mentioned in a previous blog, the home had just undergone an inspection prior to Christmas and it is odd these two items weren’t noted at that time.
“In theory, when the inspector is doing a regular food inspection they would be looking down in the basement at whatever was happening in the freezers,” stressed Walker.
“And I know in the past, the public health inspectors have been down and looked in the freezers, based on what they reported to me when they got back.”
Now, the inspectors may have only been shown the small room where the two freezers are kept, but elsewhere there is plenty of evidence of rodent droppings and other signs of a mouse or rat infestation.
This most recent inspection did not warrant any orders being written up, noted Walker.
“There may have been follow-up done but it didn’t progress to the need for an order.
“I know property standards was involved at the beginning when the premises were purchased,” added Walker. “I have to believe whatever is down there met the requirements for both fire and property standards at the time the building was renovated.”
As a follow-up, Walker touched bases on Feb. 7 and advised, “I talked to the public health inspector who responded to the public complaints about Walnut Manor. She was aware of the peeling paint and potential pests in the basement.
“She attended and had conversations with the owner’s representative on site and there are plans in place to address all of those concerns. Inspection took place Feb. 5 and she was satisfied at that time the outstanding issues didn’t represent an imminent threat to the health of the residents of that building and that the operator would be taking appropriate steps to address all of them.
“And so a re-inspection will be planned to ensure all of that has taken place.”
Now we understand Walnut Manor has new guests . . . bed bugs in at least one room.
Well, if they are in one room, they soon will be making themselves at home elsewhere.
But, not to worry. As owner Vishal Chityal- aka Charlie Duke – told the Quinte News in an interview last spring, “We’ve got a great team. Everybody does what it takes to keep the residents happy and housed.”
Right you are.

Why would the owner of a supportive living facility choose to adopt an alias?

A SURPRISING TURN OF EVENTS

As we wrote last week, city council was asked at its Feb. 5 meeting to approve a motion to remove the city hall needle disposal kiosk and replace it with a new, improved design unit at a proposed location on St. Catharine Street, near the municipal parking lot.
Well, council turned thumbs down on that motion, instead voting to keep the sharps disposal kiosk at its present location.
Coun. Garry Clarke was the lone voice in favour of the move with councillors Jeff Kohler and Joan Rymal absent.

“I don’t want to put it in a parking lot,” stressed Mayor Heather Jackson.
“Before we move, we should look at other options,” added Coun. Mark Tinlin.
As to installing video surveillance to determine who might be incorrectly dropping off used needles, Jackson noted “I don’t want to turn people off. We need to ensure confidentiality.”
The annual cost of providing this service is approximately $8,000.

WATCH FOR THIS ONE

At Monday’s meeting, council is being asked to endorse a resolution of the Association of Municipalities of Ontario (AMO) urging the province to protect unwilling communities from being forced by arbitrators to adopt a fire medic pilot project or program.
Firefighters argue since they are often first on the scene, they should then be trained and allowed to perform some of the duties of paramedics. 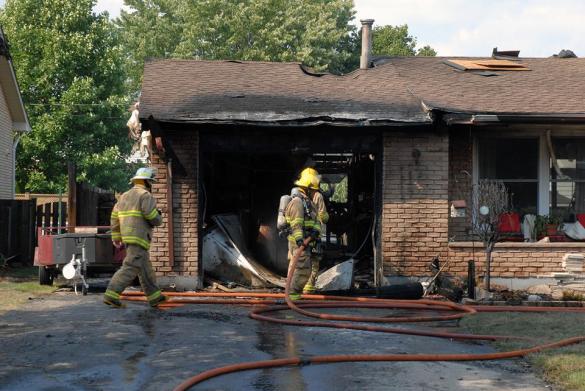 Thus the term fire medic.
A move firmly opposed by AMO and, of course, paramedics.
The provincial firefighter’s association argues it provides a better service delivery model and would save money with fire medics.
CUPE, the union representing paramedics, contends the move is nothing more than an attempt to provide more work for members of the firefighter’s union.
And don’t forget, firefighters earn substantially more than paramedics, to the point of stretching municipal budgets to the limit.
Keep in mind the nearly $500,000 overtime in the fire department’s budget last year.
The province is looking to operate a couple of pilot projects in municipalities to determine the feasibility of such a system.
So, will St. Thomas council support the AMO resolution?
Can’t imagine the mayor backing it after firefighters so graciously went door-to-door with her campaign material in past municipal votes.
Definitely worth watching in this election year.