Correction: As noted previously by then police chief Darryl Pinnell, the correct number of members of the St. Thomas Police Service earning in excess of $100,000 in 2016 should have been 46 and not 43, making the overall total for that year 113. The increase then for this year is from 46 members to 49.

As noted last week, not everyone is upbeat about the proposed development of the Alma College property.
The London branch of the Architectural Conservancy of Ontario wrote on the City Scope Facebook page, “‘ye olde’ facade pastiche replica is completely inappropriate to the authentic heritage building that was destroyed and the new building design.”

And Serge Lavoie from the St. Thomas-Elgin branch of the ACO forwarded these comments.
“Putting upwards of 400 units on this property isn’t necessarily a problem,” writes Lavoie. “A great boost for this part of the city, especially Ross Street commercial. Less density would be better.
“The proposed buildings themselves are a big problem. The design is extremely dated. We’ve seen this kind of architecture since the early 60’s and it doesn’t age well. Too much mass, too much brick, not enough wow factor.
“The biggest problem of all is to cut and paste the Alma facade on this ugly building. It adds to the incoherence of the design. It looks dwarfed and overwhelmed by the building behind it. This is not a fitting tribute to Alma College.
“It isn’t good heritage conservation practice. Like Grand Central Apartments on Talbot, we will see these as a giant mistake in hindsight and future generations will wonder what the hell we were thinking when we allowed this development to proceed as proposed.
“Our community deserves better,” concludes Lavoie. 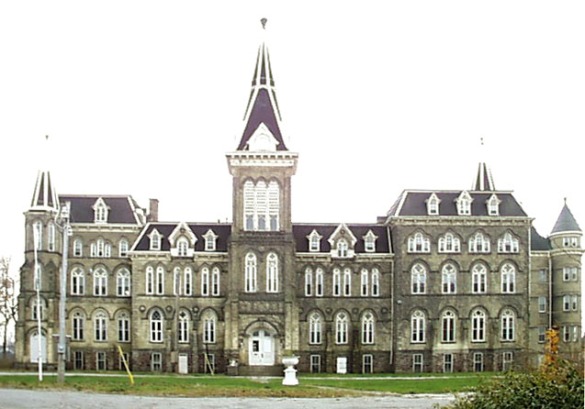 You have to admit, the drawings submitted by developer Michael Loewith appear to portray the facade as a pop-out on one of the apartment towers. Not an attractive or realistic portrayal of the main building at the former school for girls.
Could the issue rest with the submitted drawings and not the finalized proposal?
A call to city manager Wendell Graves added credence to that possibility but also revealed an alarming reality regarding the vulnerability of the Moore Street property.
Graves stressed the drawings presented to council were akin to artist’s renditions of what Loewith’s proposed development will look like.
“They have not had time to finesse the fine details of the drawings and I know they are doing that,” explained Graves.
“The requirements of the (Ontario Municipal Board) order are that the portion of the facade that will be replicated has to be in size to the original. It will not be a miniature.
“They just wanted to bring their overall concept plan to council to give an idea of where they were heading.”
So how much facade replication would be required for the city to lift the OMB order on the property?
“I think that is something that ultimately has to be considered by the council in consultation with heritage groups in terms of what that will look and feel like,” noted Graves.
“They (the development team) intend to have the tower and the main centre building flanking on each side. If we can get everybody satisfied on that . . . I know they want to do the right thing. Everybody wants it to look right. We just need to give the architects time to pull it together.”
Graves noted the city would like to approach the OMB as soon as possible to remove its order on the property, the main condition of which is replicating the facade.
“We are going to reach out to them fairly soon, just so everybody understands the process,” said Graves.
“But we won’t go to them until everything is locked down and everybody is satisfied. We just need to understand from the OMB the actual administrative process that needs to take place.”
The heritage designation on the property will not exist once the conditions of the OMB order are fulfilled.
Of concern is the fact the amphitheatre and the main gate and fence never have been part of the OMB order.
“The only thing the order addressed was the facade, itself,” explained Graves. “So, they have been vulnerable all along. Fortunately for all of us, this group wants to preserve the amphitheatre and the gates.
“Any interested owner could demolish the amphitheatre and gates. There would be nothing you could do.
Some historical context is in order.

In 2010, city council was presented with a report from Graves calling for removal of the heritage designation on the Moore Street property, in place since 1994.
In December of that year, the property and all key buildings were designated under Part IV of the Ontario Heritage Act. The historical significance of the site is also recognized through a provincial plaque, which had gone missing.
In 2007 the city signed a deal with Alma Heritage Estates, owners of the former school for girls since 1998, which allowed the Zubick family of London to demolish most of the college.
Under terms of that agreement, the designation bylaw would be repealed and most of the main building, except for a small portion of the facade and belfry tower, would be demolished.

The Alma College property deserves ‘building something that is beautiful’

Following allegations of workplace harassment, a third-party investigator has been appointed to report on complaints made by staff at the Elgin branch of the Canadian Mental Health Association.
Last October, members of OPSEU local 133 held an information picket outside the St. Thomas office on Centre Street where they claimed to be working in an environment of fear, intimidation and anxiety.
Carol Warner, OPSEU staff spokesperson, said at the time employees are consistently targeted and penalized by upper management for speaking up about health, safety and other workplace concerns.

“It’s hideous, it’s a long-standing issue,” noted Warner at the time. “I would say it’s a systemic issue. We have grievances in the docket that are, at a minimum, four or five years old. And the grievance program has flaws as well.”
“They (the grievances) are about bullying, harassment and toxic workplace and they’ve just been ignored,” added Local 133 president Tischa Forster.
“I think lots of workplaces have experienced harassment and bullying and a toxic work environment but this one is unique in terms of how long it has been this way,” continued Warner.
“And how unwilling the management – from the executive director (Heather Debruyn) to the board of directors – have been to address the problem.”
Now, the Southwest Local Health Integration Network has appointed Ron McRae to report on CMHA Elgin’s compliance with its contractual agreement to the LHIN.
Kelly Gillis, interim co-CEO of the Southwest LHIN, wrote in a statement the investigation will have no impact on service delivery. She added “all partners involved will work to support a health system that prioritizes patient care and strengthens care delivery across our region.”
A full report will be presented by the end of the month.
With a little more than a month to undertake such a report, is this enough time to truly get to the heart of the matter?
“Yeah, it is a very short timeline,” admitted Ed Arvelin, chairman of the OPSEU mental health and addictions division, “but you have to trust they are good at what they do and put our faith in getting a resolve to the situation.
Arvelin felt there has been some improvement since that October demonstration in St. Thomas. 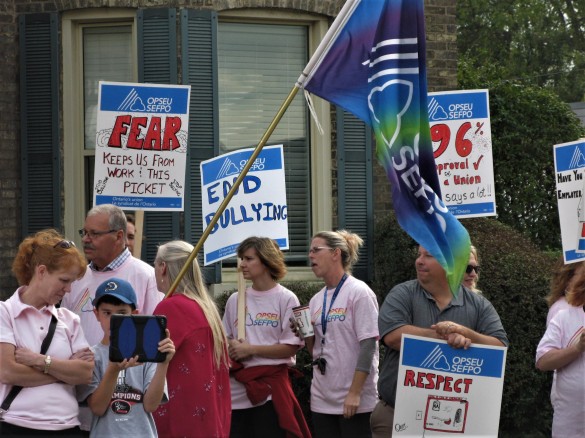 “There have been talks between OPSEU and the management. Has anything been resolved? I’m not sure. But the lines of communication are open right now.
“We’re being asked to do more with less,” continued Arvelin. “And part of it falls on the Ministry of Health and Long-Term Care regarding lack of funding for adult mental health in Ontario and the mental health division (of OPSEU) has been calling for a review of the mental health system in Ontario for quite some time now and it’s falling on deaf ears.
“We need more supports and more staff.”
Arvelin stressed the situation is not unique to the Elgin branch.
“It’s across the province. It’s a constant evolution and that’s why we feel a review is needed now so that we can see where all the pieces are and where they need to go and what is it going to take to get there.
“We’re hoping that bringing to the light the situation and frustration, will start a conversation about working together so we can move forward together.”
We pointed out to Arvelin that nowhere in the release from Gillis does it mention staff concerns.
“Here’s hoping at the table we can put that on the agenda and that gets dealt with. If we are sitting down talking, things will get resolved and we’re not being dictated to.

You would expect a healthy workplace environment at the Canadian Mental Health Association wouldn’t you?