The crack of a wooden bat meeting a leather-covered baseball at the old ball diamond in Fingal is but a distant memory, however the Union Road site of games hosted by numerous editions of local teams is soon to be transformed into a heritage park.
A fixture into the 1960s, it was replaced the next decade when the Optimist Club provided Fingal with a more modern facility.
Southwold still maintains the green space north of the main intersection – site of the Fingal Foundry and Machine Shop – and a few years ago, a number of Fingal residents started having yard sales to raise money for playground equipment.
Ross Burgar, chairman of the Southwold Township History Committee, calls it a blank canvas awaiting the addition of creative strokes. And his committee is partnering with S.S.#12 Southwold School Alumni to colour that canvas. 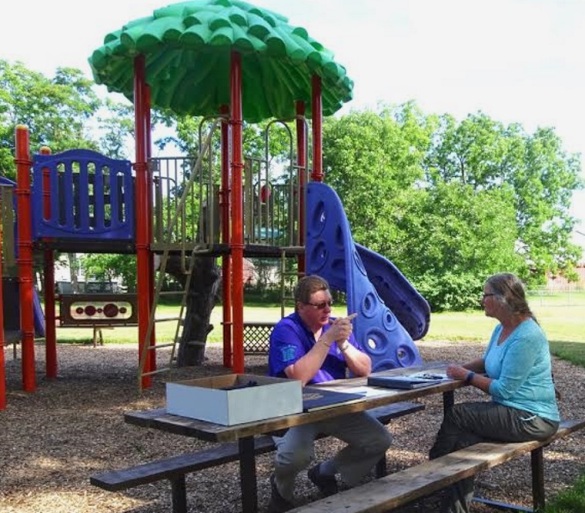 Fingal native Len Lynch and Catharine Spratley, supervisor of parks and recreation for the City of St. Thomas, discuss plans at the site of the old ball diamond in Fingal.

Catharine Spratley, supervisor of parks and forestry for the City of St. Thomas, has also offered to bring her extensive knowledge and experience to the table in a consulting capacity. Spratley designed the War Memorial Park at the Shedden Keystone Complex, established about 20 years ago, and worked with Fingal native Len Lynch on that project.
“A couple of years ago, I proposed the idea that something could be done there,” advises Burgar. “So I put a presentation together and this year the township council and staff brought it to my attention that the provincial government had a Main Street Revitalization Fund and we could possibly qualify.
“And we did. The total funding from the province is $41,556. It gives us some seed money to get things started.”
On what is to become the Fingal Heritage Park.

“To make this an inviting public place to be proud of, we will begin by developing a plan with a proper landscape design,” stresses Burgar.
“We need to determine what features will be installed and establish an agenda for completion.”
Burgar points out the heritage park will be a passive park and not a return to playing fields.
“But possibly it could have walking paths with interpretative signage, benches and tables, possibly a gazebo to get out of the sun. If we have a concrete area then we could certainly have chalk art for children as a possibility.
“We want to landscape it with trees and shrubs and flowers. Possibly one or two public art installations and maybe we could even do a piece of public art that leads the charge against racism or bullying.”

These are features you would typically find in larger municipal parks, suggests Burgar.
“But they don’t have to be limited to a big city. We can promote those positive ideas as well. Fitness parks are also becoming more popular in municipalities and we don’t need to have a dozen pieces of equipment, but if we have one or two on the walking trail.”
Burgar hopes to utilize another notable item from Fingal’s past into the park.
“Last summer, the fence that stood in front of the Fingal cemetery for over a hundred years was taken out and replaced and we salvaged some sections of that fence that I hope we can incorporate, somehow, into our landscape design because that fence has significant history in the Fingal area.”
While no time frame has been established, Burgar says the park will be developed in stages. 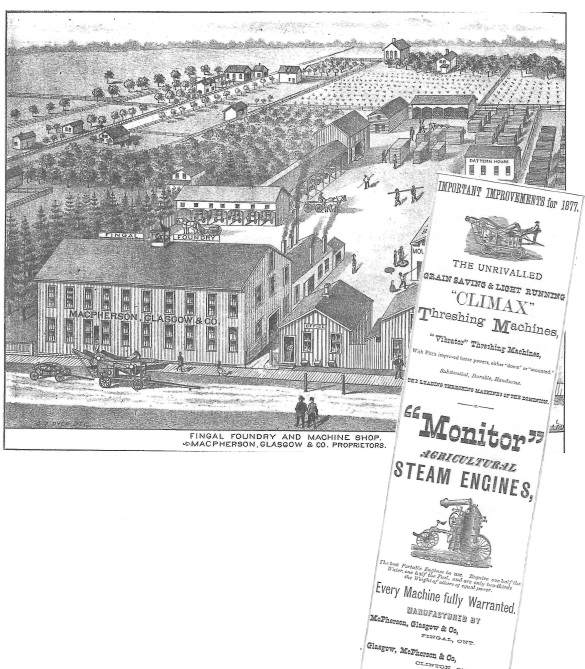 “A timetable is one of the things we need to do first. Green Lane Community Trust is sponsoring our park group for an amount up to $10,000 to cover the initial consultation and design fees.
“My hope is, once it is a work in progress, it creates some excitement and I think we will have much better luck having fundraising campaigns where you can actually see that it’s a work in progress.”
With the end goal of re-purposing what was once the domain of the Fingal Athletic Club and the likes of Henry ‘Hank’ Annett and Lloyd ‘Pod’ Graham into an inviting outdoor centre of community interaction and a celebration of Fingal’s history.

This story also appears in the July 31, 2018 edition of The Echo, available in Port Stanley, Sparta and Union.