It’s one of those unperceived neighbourhoods in St. Thomas . . . life beyond the hump of the Barwick Street bridge.
The residents, who enjoy a tranquil setting west of the railway track, may soon be joined by a couple hundred new neighbours if the city approves a proposed subdivision in the Hill and Barwick streets enclave.
The Ostojic Group of St. Thomas is proposing a 75-lot subdivision west of Hill Street with Nick and Joe Ostojic making their pitch to council this Monday (June 17).
It’s not the first time the Ostojics have sought to develop the open field nestled between the St. Thomas bypass and Kettle Creek.
The stumbling block in the past has been the restricted access across the wooden bridge that spans the CN line to London.

In their deputation to council, the Ostojics point out the city has to become an active player in any development due to the Barwick bridge bottleneck.

In a letter to Mayor Joe Preston and members of council, they note the area “has been neglected for some time,” and the only way that lack of access can be overcome “is the construction of a bridge so as to have access by fire trucks, emergency vehicles and other service vehicles.”
According to the Ostojic Group, CN is prepared “to contribute to the cost of an overpass bridge built according to specifications which would be established by the City of St. Thomas.”
The Ostojics undertook a bridge design some years ago with the cost of demolishing the wooden structure at the time coming in around $850,000.
With a clear need for affordable housing in the core area of the city, the Ostojics note their proposed development would improve the area infrastructure, including the bridge, streets, sewers and water main.

“To have the city take a definite position in supporting the development would assist in sourcing financial commitments from other levels of government,” the Ostojics point out.
The timing is right for the project, stresses Peter Ostojic, who will not be part of the deputation to council.
In a lengthy conversation yesterday (June 14), Peter advises “We are going to be finishing off the Myrtle Street site (the former Myrtle Street Public School) at the end of October and we have no more property in St. Thomas.”

“To have the city establish a working group on behalf of all concerned with a mandate to consider the possibilities, costs and benefits is the hope of the Ostojic Group at this time.”

Peter continues, “We notice the city has put a lot of money into that area in the last three or four years. And that’s the last piece over there.”
It comes down to the need for affordable housing, advises Peter.
“Nobody in this community has put more money into affordable housing than the Ostojics. Not even the city.
“The Ostojics understand not everybody in this community can afford a half-million dollar house. We would like to do that subdivision and we are going to make sure that everybody in this community will be able to afford a home over there.”
Peter added they would like to have as many of the 75 lots as possible be designed as affordable housing.
“We potentially want to build semis that are not $300,000 a side.”
They conclude their letter to council by observing, “To have the city establish a working group on behalf of all concerned with a mandate to consider the possibilities, costs and benefits is the hope of the Ostojic Group at this time.”
Peter adds, “If council chooses no, then we’ll cross that bridge when we get there.”

STAY AND SHOP AT THE ELGIN CENTRE
Over on the far east side of St. Thomas, the owners of the Elgin Centre would like to build a hotel and apartment on the 20-acre Wellington Street property.
Their proposal would include a five-storey hotel with 92 units, meeting rooms and a restaurant to be constructed at the west end of the mall. It would require demolition of a portion of the mall to accommodate the new structure.

Additionally, future use of the property could also be a mix of apartments and office/retail in a proposed new building.
An amendment to the city’s official plan would be required to support the hotel development.
In a report to be presented to council Monday, the city’s manager of planning services Jim McCoomb notes, “In my opinion, the proposed amendment is consistent with the applicable policies of the plan.”
McCoomb continues, “in my opinion, the proposed apartment use is consistent with the criteria of the plan for mixed-use development in the major commercial designation.”
In his report, he advises “The plan has been designed to ensure appropriate setbacks from the adjacent established residential communities to the north, east, south and northwest. A shadow study was completed and did not identify any adverse shadow impacts on adjacent residential buildings. The proposed density, height and character is compatible with the surrounding area.”
The big ‘if’ in all of this?
Will the projected occupancy rate seven days a week justify building a 92-room hotel?
If you remember, St. Thomas developer Bob McCaig could not convince any hotel operator the demand warranted proceeding with a branded facility.
That is why the land to the east of the Joe Thornton Centre remains vacant.

INKING A DEAL
Well, it seems my old stomping ground could soon become luxury apartments.
Hillside Property Developments has approached the city for funding under the Community Improvement Program to convert the former home of the Times-Journal into 16 apartment units. 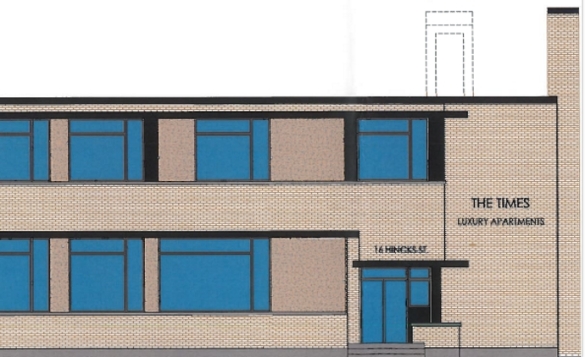 Hillside is proposing to invest $1.6 million into the undertaking.
Being very familiar with the building – and in particular, the eery basement – that figure seems a little on the light side.
And, still with the T-J, is there any truth to the rumour the paper will soon drop down to three print editions per week?

ENJOYING THE GREAT OUTDOORS
Earlier this year, Andrew Gunn approached city council with the idea of creating outdoor patio areas at existing restaurants in the downtown core.
Well, city manager Wendell Graves took notice and in his report to council he is recommending members authorize a pilot project with temporary outdoor patio areas to be coordinated through the Downtown Development Board.

According to Earl Taylor of the DDB, the response from downtown restaurants is “very positive.”
What Graves envisions would entail “temporary patio areas on the sidewalk immediately in front of various eating establishments with a temporary, protected, bump-out sidewalk being placed in the parking space adjacent to the patio area. The patios would be seasonal in nature.”
Best of all, the project would be funded through a donation sourced through Gunn.
If council approves the concept, Graves recommends it be a pilot project this year, subject to implementation of all of the administrative actions that will be required.”
Now, who is responsible for the provision of more summer-like weather with a lot more sun and easy on the rain?

THE COLOUR OF FRIENDSHIP
This corner joined Liz Brown, executive director of Violence Against Women Services Elgin County, yesterday at Southwold Public School for an inspiring presentation involving the school’s Jr. WE Club.
The occasion was a donation of $1,571 to Brown for the Women’s Place Emergency Shelter in St. Thomas, a safe place for women and children in need.

The money was raised at a Kids Helping Kids Movie Day fundraiser held last month at the school.
Each student was asked to bring $3 or more toward the movie (Smallfoot), popcorn, drinks and the chance to win a spiffy door prize.
Perched on a tiny chair while the dozen or so young students were seated on the floor, Brown regaled them with the following story about several women and their kids at the shelter.
“The children at the home at the time were under the age of three,” recounted Brown. “And their siblings were at school.
“To be able to tell their moms and the other women there that you were thinking of them and wanted to hold them in your hearts was so powerful.”
The money raised will be used to safely transport women and children to the emergency shelter.

“We want to thank you because your act lifted spirits, your kindness really touched hearts and it will not be forgotten.”

“We are going to utilize it to bring families from all across Elgin to the safety of the emergency shelter,” explained Brown.
“We have a beautiful home, but unless it is accessible it doesn’t make the lovely difference that it does. Every penny of that will go toward safe transportation any time of the day. It can be for drop-in counselling or it can be for coming to stay at the shelter.”
Brown explained the organization contracts with one vendor and “we select the drivers from the vendor to supply the services for us. They cannot disclose any information. That is really important so people know their privacy is kept.
“We want to thank you,” continued Brown, “because your act lifted spirits, your kindness really touched hearts and it will not be forgotten.”
Brown presented each student and teacher (Mrs. Granger and Ms. Walters) with a yellow rose, with yellow being the colour of friendship.
To recognize “the kindness and friendship you have about supporting others,” said Brown.
“This is awesome because it is kids helping kids and their moms get to safety. Which is so powerful.”