Tony Hofstee sure lit up the T-J Facebook page with his letter to the editor documenting the efforts of volunteers and committee members associated over the years with the Holiday Fantasy of Lights.
His long list of items and services paid for by the Fantasy of Lights will come as a revelation to many, including mayor and members of council
These include electrical work and supplies, upgrades to the washrooms, trees and plants for Pinafore Park, donations to other worthy organizations and the list goes on.
Tony closed his letter with the hope “the mayor and parks director Catharine Spratley apologize to the volunteers who ran the Fantasy. Yes mayor, we did pay our own insurance!”
His letter elicited dozens of responses, including this sampling:
Lori Calvert posted, “Well done Tony. I am glad someone put into print all that we (all previous and current members) did that went unnoticed. But sadly this will fall on deaf ears … if I had a dollar for every time I heard someone say ‘why didn’t they ask for volunteers?’ The bottom line is always missed. FOL didn’t ask for hand-outs and money just stop putting up road blocks and charging fees when it is for the betterment of the entire city!!!”
Here’s input from Nicole Keating: “I was very disappointed in the inaccurate statements put out by the city about this event. I’m glad Mr. Hofstee has corrected the misinformation. It’s disappointing when civil servants provide false information about community events & volunteer organizations to the community they serve.” 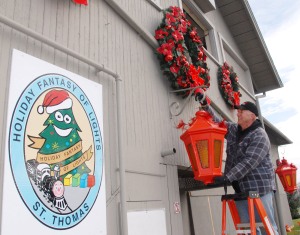 Debbie Axford Palmer responded in this fashion: “Thank you Tony Hofstee for bringing this information to light! I had no idea the extent of hard work and time this great group of volunteers have contributed to this event and to the park over the years for the citizens of this city and area to enjoy! Kudos to you! As a taxpayer, businesswoman, single mom and a neighbour to Pinafore Park who enjoys the many events, I apologize your efforts and hard work have not been fully recognized and help readily available from city hall to ensure this and other events are continued! It is truly shameful!
Why even the mayor joined the fray with her clarification: “Actually, my comment was they didn’t have the proper insurance requirements that are required by the city from every other event. The problem they face is lack of volunteers to do the work required to set up the event. They have been looking for volunteers for years. There were a lot of people complaining that the event was not able to go forward last year but weren’t willing to volunteer. They face the same situation many organizations are facing.”

STILL WORKING ON IT
With what remains of the chapel on the Alma College site, chief building officer Chris Peck advised at the beginning of the week of the good likelihood a property standards order would be issued by the end of the week. 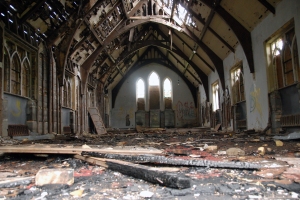 Checking in Friday revealed no order has yet been issued to the current owners, the Zubick family of London.
Seems it’s rather busy over at city hall.
“This week has blown up with so many issues,” advised Peck. “The chapel has been boarded back up but the order on the roof hasn’t gone out yet.”
So, what happens when the order is issued?
“Well, first we have to look at the appeal period that they (the owners) are mandated to have,” Peck explained. “And then you look from that time, how long is reasonable to execute the work so they have time to do it?”
Keep in mind this order will only cover securing the chapel and not the mandated in 2009 cleanup of the entire 11-acre property.
Do you get the feeling this exercise in futility is akin to spinning your tires on ice? 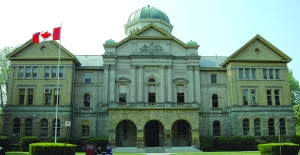 came to mind this week following word of another small fire at the Alma College Chapel.
Talking to Steve in 2009 at the announcement a new consolidated court facility would be incorporated into the existing Wellington Street facility which pre-dates Canada, he observed, “When we lost Alma, this building just became that much more important. We had to ramp up our efforts to make sure we did not lose this. Alma was a motivating factor for me to work twice as hard ensuring this site would be the preferred site.”

ANOTHER CASUALTY
Revelation of the extent of deterioration at the former Alma Street Presbyterian Church is another blow to the city’s built heritage. 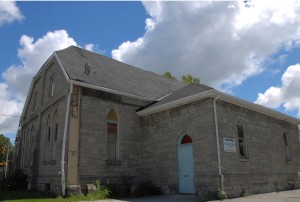 The new owners of the former Alma Street Presbyterian Church have applied to the city for a demolition permit to raze the church that dates back to 1891. The heritage building has considerable structural issues, most notable on the northwest corner pictured here.

The realization this structure that dates back to 1891 will likely succumb to the wrecker’s ball begs several questions.
Wade Woznuk, the city’s property standards officer at the time, issued an order against then owner Elizabeth Morgan
back in April, 2013 requiring an engineer’s report to verify the structure is sound and to list repairs needed to fix the foundation and walls. She was given until April 26, 2013 to comply with the order.
Given the state of the exterior of the structure this week, that order does not appear to have been acted upon and did the city undertake follow-up action on this?
The property standards order clearly states, “An owner who fails to comply with an order that is final and binding is guilty of an offence and on conviction is liable to a fine of $25,000 for a first offence and up to $50,000 for any subsequent offence.”
Has the city ever followed through on these threats? Surely wasn’t the case over at Alma College.
In an effort to seek funding to undertake repairs to the building, Morgan successfully petitioned the city’s Municipal Heritage Committee to designate the structure.
Obviously searching for liens and outstanding work orders was not part of the due diligence in this case or it is unlikely it ever would have been granted a designation for the church.
In any event, another example of demolition by neglect.
London developer Shmuel Farhi put it best in 2009, when he observed “St. Thomas is the Bermuda Triangle for heritage properties.”

“It is a very business-like and callous approach to a service that helps people. I hope that parents speak out and contact the ministry.”
OPSEU Local 151 president Steve Abdey on layoff notices issued Monday to Community Living Elgin workers.
City Scope appears Saturday in the Times-Journal. Questions and comments may be emailed to ian.mccallum@sunmedia.ca.

One thought on “Yes, the insurance was indeed paid”