A week of mixed blessings over at St. Thomas Elgin General Hospital. On Tuesday, Times-Journal reporter Jennifer Bieman wrote at length on its new role as a District Stroke Centre.
But it comes at a price as the facility will be reducing the number of registered nurses in the Continuing Care Centre by up to three but hiring more registered practical nurses and personal support workers to staff the unit.
At week’s end, we hear of more cuts at STEGH in order to meet a $1 million shortfall in their operating budget for 2016.
That can only mean more cuts, according to CEO Paul Collins. In this case up to another four staffers, although administrators are staying tight lipped at this point as to which departments will be impacted.

As always, that’s not the full picture. When you take into account early retirements and job attrition, the total number of positions lost in this latest round is closer to 11.

A hospital media release indicates the four cuts will not impact front-line care. So, will administration jobs be on the block or positions behind the scenes?
That has Francie Dennison down in Port Stanley hot under the collar. She’s the editor of Port Stanley News.com and she knows of what she writes.
“STEGH can get thousands upon thousands of dollars for its physical expansion plans but can’t afford to keep four employees,” challenges Francie in an email sent our way.
“I find that difficult to believe and suggest you take those four employee’s salaries out of the wages budgeted for the top ten highest paying jobs in the hospital. Then, from the next top ten highest paying jobs in the hospital, take the money needed to hire more or better cleaning staff.” 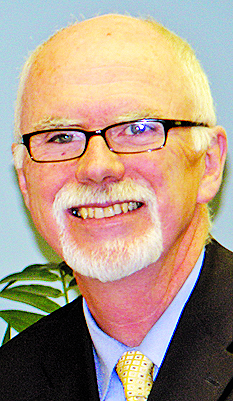 Cleaning . . . now that’s one area already impacted by cuts, as any visit to STEGH can attest. But let Francie finish that thought.
“On my last visit to emergency, my husband had to insist on two cleaners picking up the dead bugs on the floor of the examination room I was in. We talked before about how dirty the hospital is, Paul (CEO Paul Collins), and I’d like to know exactly when you intend to ameliorate this health hazard.”
She doesn’t sound happy and you don’t want to rile a news editor.
Now there are two streams at play here: not enough dollars from the province or poor utilization of financial resources.
Or, more likely, a combination of both.
But if we focus on how some of those funds have been spent, few people appear to have forgotten the Paul Collins retire/rehire two-step back in 2010.
Do you remember he tendered his resignation on June 30 of that year and was re-hired the following day.
At the time this corner wrote, “The whole premise of retirement is nothing more than a smokescreen to cover what is clearly a case of double-dipping. After resigning, Collins returned with his full salary of $205,269 plus his pension.”
Best use of financial resources?
And what about the outsourcing of the hospital’s medical transcription services in 2013, resulting in the loss of four full-time and an equal number of part-time jobs.
Citing confidentiality, Cathy Fox — at the time STEGH’s communications/public relations specialist — would not disclose the annual cost of outsourcing the transcription service, but did say the hospital expects “a cost savings range of approximately $100,000 to $150,000 in 2013, with expected higher savings range in 2014 of approximately $200,000 to $250,000.”
Did those savings materialize?
At the expense of quality and accuracy?
And, by the way, what became of Cathy Fox?

I’m sorry your patient care has been outsourced

And you thought the CEO of St. Thomas Elgin General Hospital had actually retired

Any misinformation in CEO debate was self-inflicted

Practice of double dipping a crime against our youth

Thursday was the deadline for tender bids relating to possible demolition of the derelict Sutherland Press building, advised city manager Wendell Graves.
“They were received today (Thursday) and they will take a week or a little to evaluate them so we can bring back information to council,” noted Graves.
Following the process and the lowest or winning bid is determined, will the wrecking ball be rolled in?
“This thing, as you know, can be fluid,” Graves cautioned. “So we will be in lock step with our legal advisors. Things can change from day to day. But we have got to this point in a process.”
You can bet the city is treading lightly on this second attempt to remove the edifice from the downtown landscape.
The first attempt in 2008 was not a pretty sight. It came to an abrupt halt in late July of that year when Justice Peter Hockin ruled in favour of owner David McGee ’s request to stop the city from dismantling the building constructed in 1913 for the Noble Manufacturing Co. Ltd.
No word if St. Pierre Construction — the successful 2008 bidder at $154,500 — expressed an interest in finishing what they began years ago.
Hey, they have experience on the job.

TURNING A BLIND EYE
Gerry Smith has better things to do than email city hall. But he is getting good at it as witness this email sent our way this week.

“I wanted to let you know that I have sent 50 emails to city hall since Nov. 2014 and still am fighting for them to clean this up.”
What needs to be cleaned up is the city’s lackadaisical approach to miscreants who continually ignore the courthouse area parking regulations. Seems there are two individuals in particular who don’t obey the signage or feel the rules do not apply to them.
“They (the city) are choosing to do nothing about it,” continues Gerry. “I am simply disgusted with the people at city hall for ignoring this. These two people should be told not to park here anymore, how complicated is this. They are congesting the corner of Queen & Wellington and still (supervisor of roads and transportation) Dave White does nothing about it.”
How quickly do you think you or I would be ticketed for parking in these choice spots? Perhaps a project for next week.
And is it true some motorists are taking their courthouse area parking tickets over to the clerk’s office to be dealt with in a manner that doesn’t involve any payment?
Related posts:
Psst, need a courthouse parking permit

When will the mayor deliver on her parking promise?
And now this week’s parking plan

City Scope appears Saturday in the Times-Journal. Questions and comments may be emailed to ian.mccallum@sunmedia.ca.
Follow @ianscityscope