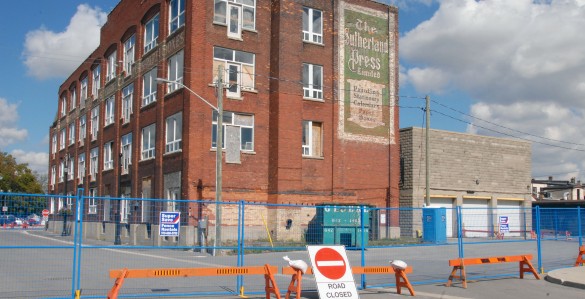 If the elements don’t hasten the demise of the Sutherland Press building, time spent in protracted court battles may ultimately prove the enemy of the derelict structure.

As the result of a technicality presented May 27 of this year to Justice Gorman by building owner David McGee, no decision has been reached as to whether the city can proceed with demolition of the Talbot Street building dating back to 1913.

In a decision delivered Tuesday, Justice Gorman declined to rule on McGee’s request for an injunction to halt demolition of the four-storey structure deemed unsafe by city engineers.

Instead, Justice Gorman did accept McGee’s submission at the May hearing in the Elgin County Courthouse that Sutherland Loft Inc. did not receive notice of a building order and its president was unaware, specifically, the building might be demolished if not remediated by the owner.

In March, the city advised McGee via registered mail that demolition of the building would begin at the end of that month because of noncompliance with a property standards order. The order called for immediate replacement of spalling or damaged bricks and securing the roof, which had suffered a partial collapse.

McGee’s lawyer, Valerie M’Garry, argued because McGee’s signature was not on the registered letter delivery receipt then, in fact, he did not get the notice from the city.
City manager Wendell Graves indicated Justice Gorman referred to the mail snafu as improper procedure on delivery of notice.

The city will review this decision with its legal counsel to determine the next steps, added Graves.

“The safety of the building was not discussed one way or another,” in Justice Gorman’s decision, noted Graves.

“We have reviewed info from our structural engineer and the building remains unsafe,” he stressed.

Due to the ongoing safety concerns, the city will close a section of Moore Street, from Talbot Street southward to the Moore Street parking lot, effective today.

Day-to-day operations of the transit building will be temporarily moved to South Edgeware Road, where space is available at the Community Recycling Centre.